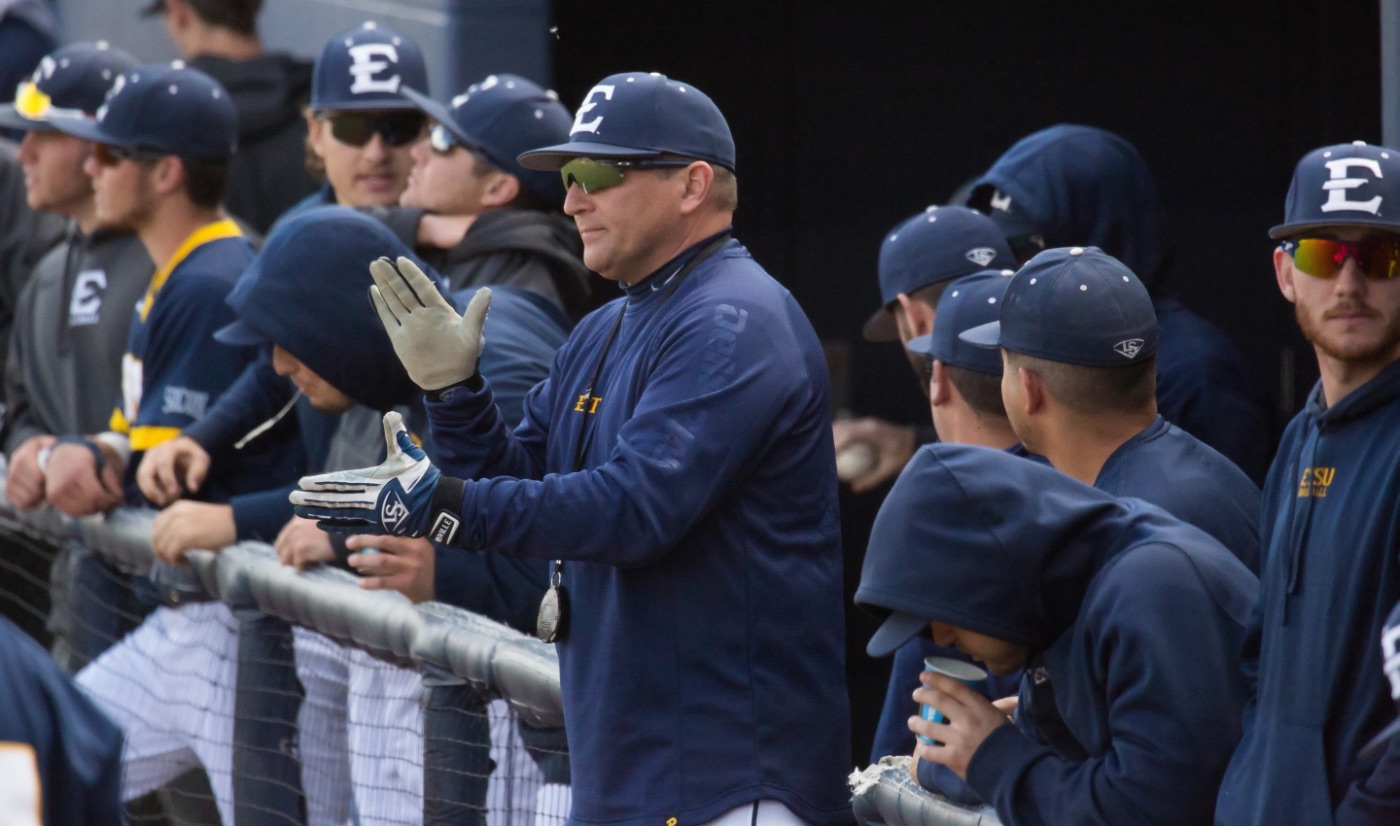 JOHNSON CITY, Tenn. (May 3, 2016) – After picking up its first series sweep this past weekend over VMI, the ETSU baseball team looks to cap off a perfect homestand as the Bucs host Winthrop on Wednesday night at Thomas Stadium. First pitch is set for 6 p.m.

Sophomore catcher Hagen Owenby (Knoxville, Tenn.) earned Louisville Slugger National Player of the Week and Southern Conference Player of the Week honors following his exceptional performance last week … Owenby went 13-for-20 (.650) with one double, three home runs, seven runs scored and eight RBI in four games last week … Owenby homered in all three games against the Keydets, marking the second time the Knoxville, Tenn. native has accomplished the feat … For the series, Owenby hit .667 (10-for-15), while recording a 1.333 slugging and a .667 on-base percentage.

Lance Mays (Ridgely, Tenn.), Christian Bailey (Kingsport, Tenn.) and Jeremy Taylor (Fayetteville, Ga.) also hit over .500 in the three games … Mays hit .571 (8-for-14) with four doubles, five runs and three RBI, while Bailey – who has hit safely after starting the last four games – posted a .545 clip (6-for-11) with three runs and four RBI … Taylor finished the three games going 7-for-13 (.545) … The Buccaneer outfielder also opened the series by tying a career high with five hits and tied the program record with five runs scored.

Blake Rowlett (Clarksville, Tenn.) and Aaron Maher (Brentwood, Tenn.) carry hefty on-base streaks into the midweek game … Rowlett has reached safely in 23 consecutive games and Maher has done so in his last 17.

As a team, the Blue and Gold hit a blistering .420 (50-for-119) with 14 doubles and four home runs, while ETSU’s bullpen went 2-0 with a 2.20 ERA (4 ER/16.1 IP) ... The Buccaneer relievers also struck out 15 and walked only two, while limiting the opposition to a .200 batting average … Junior southpaw Jamin McCann (Kingsport, Tenn.) – who earned two of the three wins this past weekend – tossed three scoreless innings out of the pen on Friday night … Junior right-hander Blake Smith (Ninety Six, S.C.) earned the other win after holding the Keydets scoreless for the final 5.1 innings on Saturday … Smith – who didn’t allow an earned run in 12.1 innings as a reliever in the month of April.

Winthrop – who hasn’t played since April 26 – has won four of its last six and enters Wednesday’s game at 22-20.

Winthrop’s pitching staff allows the fewest walks in the Big South as the Eagles have issued 122 walks, while their offense ranks second in the league in runs scored per game (6.38).

Reliever Zach Cook has six of Winthrop’s eight saves and leads the team with 23 appearances.

The Eagles have lost 14 of their 22 games away from Rock Hill, S.C.

A pair of right handers will get the start on Wednesday night as senior Griffin Krieg (Nashville, Tenn.) gets the ball for ETSU, while Winthrop counters with Zach Sightler … Krieg is making his third start of the season and still searching for his first winning decision, while Sightler is 5-2 with a 4.09 ERA (28 ER/61.2 IP) in 11 starts.

Krieg has allowed just one hit and struck out four in two career appearances (3.1 innings) against Winthrop.

Winthrop leads the all-time series 8-2, but ETSU has won the last two meetings – including a 7-5 victory this season in Rock Hill … Last season, the Bucs picked up their first-ever win over the Eagles with a 15-5 victory at Thomas Stadium.

ETSU’s one-thru-three hitters – Jeremy Taylor, Trey York and Hagen Owenby – went a combined 5-for-11 with five runs and five RBI in last month’s win … Jamin McCann got the start and allowed one unearned run in five innings of work to secure the win, while Peyton Taylor (Kingsport, Tenn.) retired three of the four hitters he faced to secure the save.

Christian Bailey is 5-for-12 in three games against the Eagles, while York his hitting .429 (6-for-14) with three extra base hits (double, triple, home run) four runs and six RBI in three career games versus Winthrop.

Wednesday’s game will be streamed live on the SoCon Digital Network, while live stats will be available on ETSUBucs.com via StatBroadcast.

The Bucs return to SoCon action this weekend as ETSU travels to Alabama for a three-game set at Samford, beginning Friday night at 7 p.m. EDT.