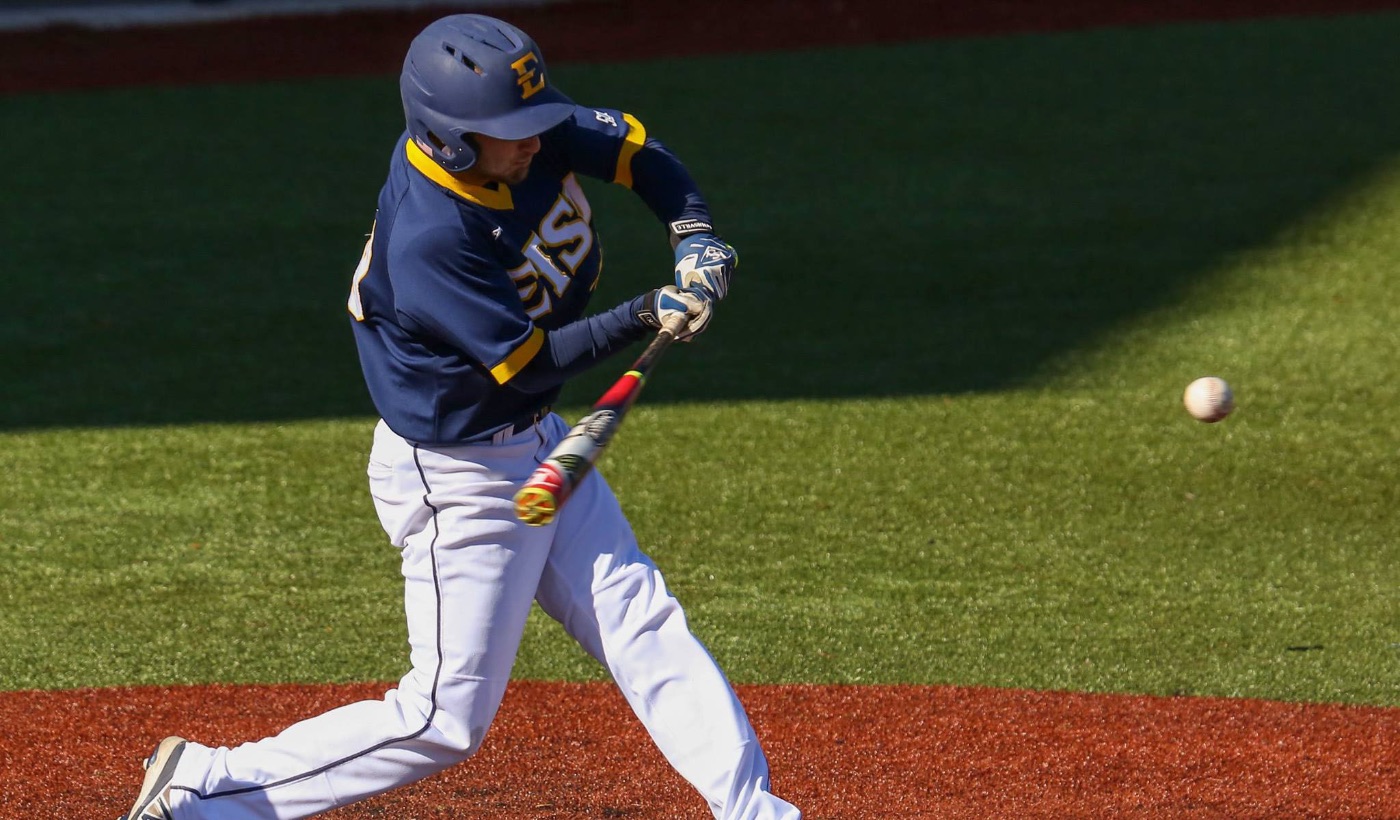 McCabe was joined by Blake Rowlett (Clarksville, Tenn.) and Aaron Maher (Brentwood, Tenn.) to homer on Saturday as the Bucs tied a season-high with four round-trippers … McCabe’s two-out, three-run home run in the seventh put ETSU ahead for good, while the Buccaneer shortstop connected on a solo shot in the ninth.

Griffin Krieg (Nashville, Tenn.), Josh Jacques (Rollinsford, N.H.), Peyton Taylor (Kingsport, Tenn.) and Ryan Simpler (Lewes, Del.) combined for the five scoreless innings to close out the game … Jacques earned the win (1-1) after pitching 1.2 innings of one-hit ball, while Simpler earned his second straight save by recording the final four outs … Taylor retired two of the three hitters he faced in the eighth (one intentional walk), and Krieg issued one hit in 1.2 innings of relief.

The Bucs have hit at least one home run in each of their last seven games, moving their season total to 62 which marks the first time ETSU has hit at least 60 homers in one season since finishing the 2011 campaign with 86.

Rowlett’s two-run homer in the top of the first inning extended a trio of streaks for the Buccaneer third baseman … Rowlett has now hit safely in his last 12 games, while reaching safely in 26 straight contests … The Clarksville, Tenn. native has also recorded at least one hit in all 17 SoCon games this season … Rowlett finished with a two-hit game and tied a career-high with three RBI.

Senior Trey York (Knoxville, Tenn.) registered his 200th career hit by knocking an RBI double to right in the top of the first … The two-bagger also moved his hit streak to seven straight games.

For the second straight game all nine of ETSU’s starters posted a hit, while the Bucs posted double-digit hits for the 32nd time this season after finishing with 12 on Saturday … Nine of the Bucs’ 12 runs scored came via the long ball.

Samford’s Tristan Widra was dealt the loss (3-4) after he was charged for two runs on one hit in 2.2 innings.

Offensively, the Bulldogs were led by T.J. Dixon’s three-hit game, while Hunter Swilling, Ben Carrick and Troy Dixson all drove in two runs in the losing effort.

ETSU has now won back-to-back weekend series and improved to 21-25 overall, 8-9 in SoCon play, while Samford dipped to 26-21, 8-9 … The Bucs have also won five straight conference games for the first time since winning seven straight in 2013 – the same season ETSU won the Atlantic Sun Championship.

ETSU, like they did in Friday’s series opener, plated the first runs of the game as the Bucs struck for four runs on four hits to go ahead, 4-0, before Victor Gonzalez (Mount Pleasant, S.C.) went to the hill. Jeremy Taylor (Fayetteville, Ga.) led off the game with a single, and ETSU’s hit-and-run worked to perfection as Trey York placed an RBI double down the right field line. After Samford starter Mikhail Cazenave got the next two Bucs to line out, Kevin Phillips (St. Louis, Mo.) came through with a clutch two-out, two-strike RBI single to score York, and Blake Rowlett followed with a two-run opposite field homer to left.

The Bulldogs got a pair of two-run home runs to pull even at four through two complete innings. Samford cut it’s deficit in half when Hunter Swilling connected on a two-run home run to left in the bottom of the first, while Ben Carrick belted a two-run homer of his own an inning later to even things up.

The Bucs regained a 5-4 lead when Rowlett drove in Hagen Owenby on an RBI single in the top of the third. However, ETSU left two runners stranded as Heath Quinn robbed Robby McCabe of extra bases in right, and Cazenave induced Lance Mays (Ridgely, Tenn.) to hit into an inning-ending pop out to second.

The see-saw game continued as Samford pushed across three runs in the bottom half of the third – capped by Troy Dixon’s two-out, two-run scoring single – putting the Bulldogs ahead, 7-5.

ETSU responded in the top of the fourth – courtesy of the long ball – as Aaron Maher’s three-run opposite field blast to left put the Blue and Gold back ahead, 8-7.

The lead changed hands again in the home half of the fourth as Samford scored the tying run on a wild pitch from Griffin Krieg, while Danny Rodriguez’s two-out RBI single to left gave the Bulldogs a 9-8 advantage.

After both pitching staffs hung goose eggs in the fifth and sixth innings, the Blue and Gold went back to the long ball to recapture an 11-9 lead as McCabe greeted Wyatt Burns with a two-out, three-run home run to left – marking his first round-tripper since April 9 against Mercer.

Samford threatened in the eighth as they loaded the bases, but Ryan Simpler got the job done after striking out Jared Watson to keep it an 11-9 game.

McCabe ripped his second two-out homer in the ninth to extend the lead to three. The Bulldogs threatened in the bottom of the inning by sending the tying run to the plate, but Simpler struck out Swilling swinging to end the game.