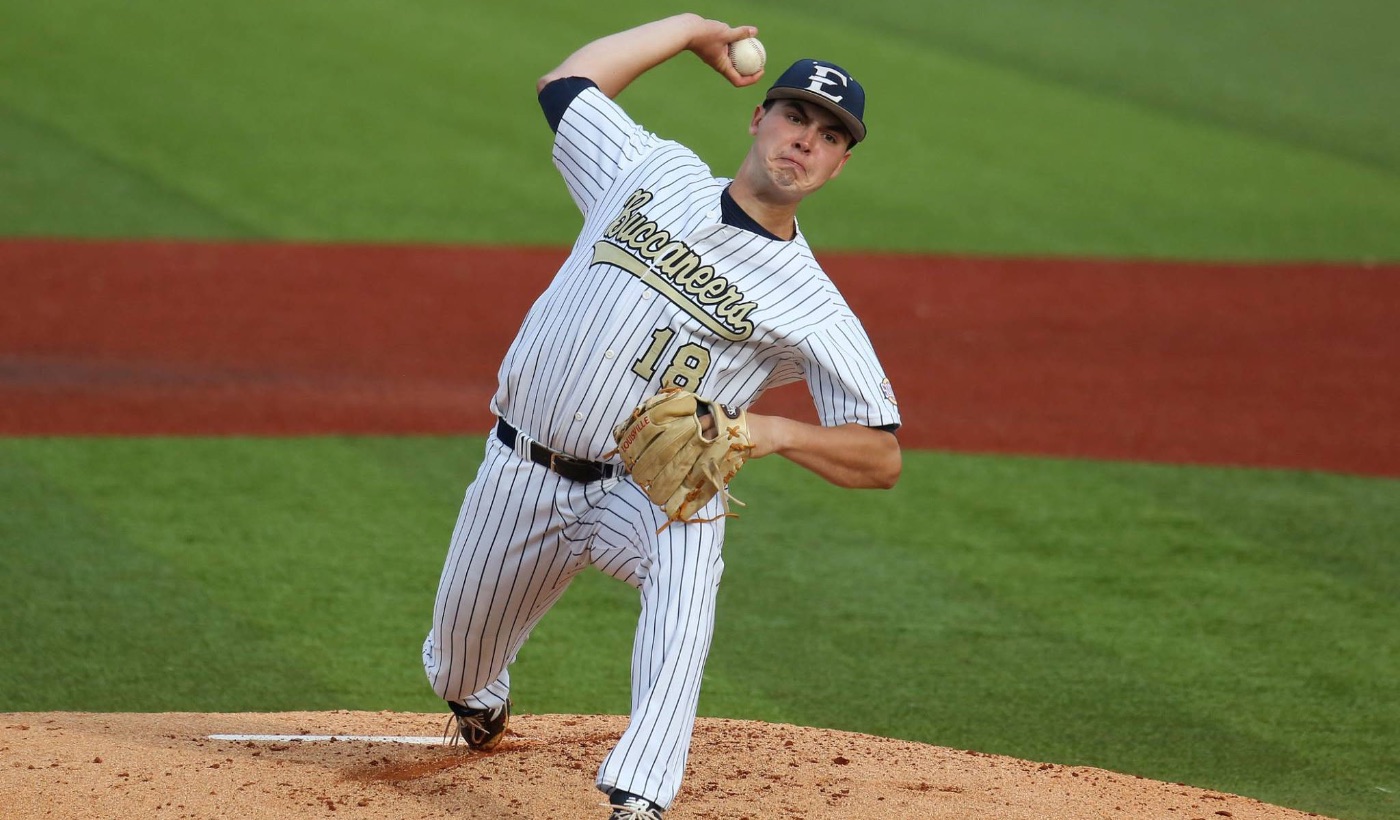 SPARTANBURG, S.C. (May 12, 2016) – Despite getting a quality start by senior right-hander Lee Haeberle (Hendersonville, Tenn.) and taking a three-run lead into the bottom of the ninth, the ETSU baseball team was unable to hang on as Wofford rallied for a 7-6 walk-off win, snapping the Bucs’ six-game conference win streak on Thursday night at Russell C. King Field.

Lee Haeberle allowed three runs on four hits in six innings, while tying a career-high with nine strikeouts … Junior left-hander Jamin McCann (Kingsport, Tenn.) tossed two scoreless innings in the seventh and eighth, but sophomore Ryan Simpler (Lewes, Del.) couldn’t finish his fourth straight game for the Blue and Gold … Simpler was tagged with the loss (0-5) after giving up the four hits and one walk in the ninth.

Senior Trey York (Knoxville, Tenn.) and sophomore Hagen Owenby (Knoxville, Tenn.) both homered, marking the ninth straight game the Bucs have hit a round-tripper … York belted his homer in the first, while Owenby’s came in a five-run fourth inning – both marking their 14th home runs of the season.

Following the seven-hit, five-run fourth inning, ETSU was held to one hit in the final five innings as Wofford plated seven unanswered runs to cap off the rally.

The Terriers had three players finish with two-hit games – including Derek Hirsch – whose two-out, two-run scoring single to right-center scored the game-winning runs … Mack Nathanson posted a two-hit game as he put Wofford on the board with a solo homer in the fourth and drove in one of the runs in the ninth with a triple to right.

David Ehmen – who held ETSU to one hit in the final three innings – earned his first win of the season (1-0) … Ehmen struck out three and did not issue a walk.

ETSU jumped out to an early 1-0 lead as Trey York connected on a solo homer to straightaway center in the top of the first. The bomb was York’s second straight game with a home run, while also marking the ninth consecutive game the Blue and Gold left the yard.

Wofford threatened in the second and third innings, but Lee Haeberle and the Buccaneer defense got out of jams to keep their lead intact. In the second, McClain Bradley laced a one-out double to left-center, but Haeberle forced a ground out and fly out to get out of the inning unscathed. An inning later, Haeberle got two quick outs before issuing three straight walks to load the bases, but the Buccaneer right-hander induced Dylan May into an inning-ending fly out to center.

The Buccaneer offense struck for five runs on seven hits in the fourth en route to extending their lead to 6-0. ETSU began the inning with five straight hits – ignited by Hagen Owenby’s leadoff home run – while Aaron Maher (Brentwood, Tenn.) singled and sprinted home on Kevin Phillips’ RBI double down the left field line. From there, Blake Rowlett extended his streaks with a single, while Robby McCabe capped off the hit parade with an RBI single to center, which scored Phillips. Christian Bailey and Owenby followed with RBI singles to cap off the marathon inning.

The Terriers got on the board in the bottom half of the inning as Mack Nathanson ripped a two-out solo home run to left, while another two-out, two-run homer by Brett Hash an inning later cut Wofford’s deficit in half, 6-3.

Despite the fourth-inning surge, ETSU’s offense was held in check for the remainder of the night as starter Matthew Wilburn and Ehmen combined to retire 15 of the final 16 Buccaneer hitters.

Jamin McCann did his job by tossing scoreless frames in the seventh and eighth, but after striking out Chandler Engel in the ninth; Ryan Simpler couldn’t close the door on the Terriers. Max McDougald placed a single over the out-stretched arm of Phillips at first and quickly scored on Nathanson’s triple to right. From there, Kody Ruedisilli drove in Nathanson as he singled down the left field line – and after Simpler struck out Demetrius Jennings for the second out of the inning – he walked Alex Paradowski on six pitches to set up the at-bat with Hirsch. After Ruedisilli and Paradowski stole second and third, Hirsch sent a 2-1 pitch past second baseman Trey York for the game-winning hit.

The Bucs will look to even the series on Friday night … Game two of the set is slated for 6 p.m.