Baseball
Baseball
The Citadel at ETSU | May 19, 2016
BoxscorePlay-by-Play 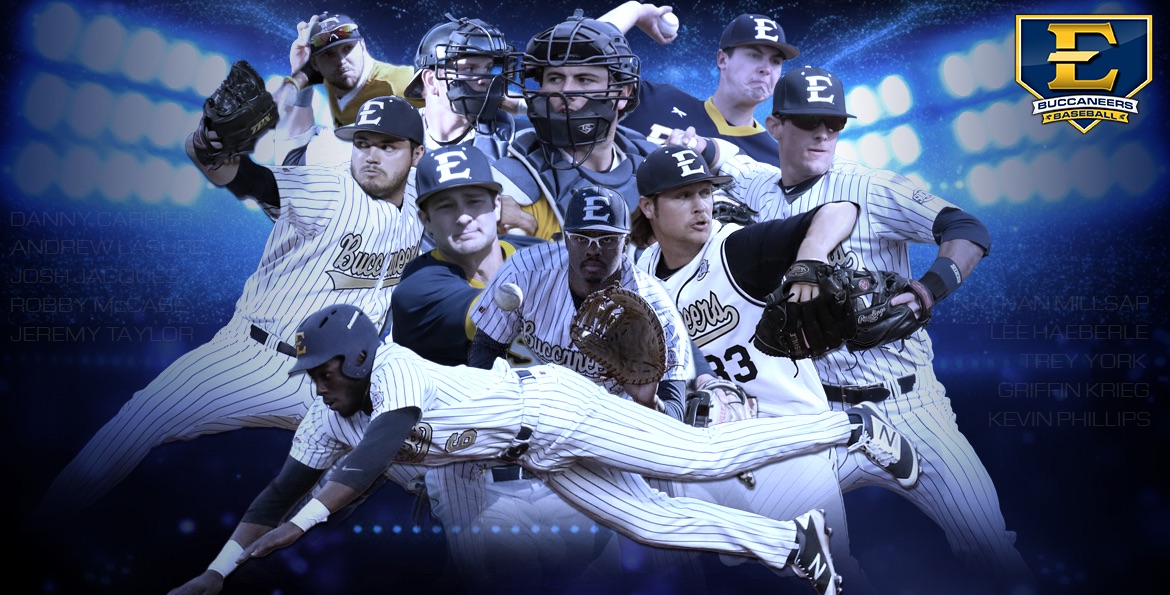 JOHNSON CITY, Tenn. (May 18, 2016) – The ETSU baseball team wraps up regular season play this weekend as the Bucs host The Citadel in a three-game Southern Conference series starting Thursday night at Thomas Stadium.

ETSU, who went 4-3 on its seven-game road swing, enters the final weekend of the regular season with an overall record of 23-28 and sits 10-11 in SoCon play … The Bucs enter the weekend in seventh-place in the SoCon standings and can finish anywhere between fifth and seventh once the final weekend results are complete.

On the mound, Jacques and Krieg are four-year letterwinners with Jacques making 75 career appearances (13 starts) … Krieg – who missed the majority of the 2014 campaign – has 57 career appearances (28 starts) and posted a complete game win against Western Carolina in 2015 … Haeberle has spent the last two seasons in the Blue and Gold as he has made 39 appearances (26 starts), while posting eight wins and 132 strikeouts in 139.1 innings.

Citadel has lost five straight and enters the weekend at 16-37 overall, 6-15 in SoCon play … The Bullodgs, who were swept at home last weekend by Samford, are coming off a 16-4 setback at No. 6 South Carolina on Tuesday night.

Offensively, Ben Peden, Clay Martin and Mike Deese have combined to hit 14 of The Citadel’s 28 home runs … Martin leads the team with a .274 batting average (32-for-117) and has six doubles, one triple, four home runs, 18 runs scored and 17 RBI, while Peden leads the team with six homers and Deese has four.

Deese leads the club with 46 hits, while Stephen Windham and Bret Hines are tied for second with 41 … Windham has reached base safely in his last 13 games, while he also leads the team with 12 multi-hit games.

Sears struck out a career-high 19 hitters back on March 24 against VMI, which marks the most strikeouts by a Division I player this season.

Twenty-three of The Citadel’s 53 games have been decided by two runs or less with the Bulldogs winning 11 of those contests.

The Bulldogs have lost 17 of their 21 games played away from Riley Park.

The Citadel leads the all-time series, 55-28, after winning all four games against the Blue and Gold a year ago … The Bulldogs swept the three-game set in Charleston and defeated ETSU in the SoCon Championship play-in game last May in Charleston.

The Bucs are looking for their first series win over The Citadel since 2004 when ETSU swept the Bulldogs in Johnson City.

Junior left-hander Jamin McCann (Kingsport, Tenn.) has made four scoreless appearances against The Citadel in his career, while Jeremy Taylor is hitting .320 (8-for-25) with three doubles, six runs, two RBI and two walks in six career games against the Bulldogs.

All three games this weekend will be streamed live on the SoCon Digital Network, while live stats will be available via StatBroadcast on ETSUBucs.com.

ETSU plays its first game of the Southern Conference Championship on Wednesday, May 25 at Fluor Field in Greenville, S.C. … Click here for SoCon Championship info.