Baseball
Baseball
The Citadel at ETSU | May 20, 2016
BoxscorePlay-by-Play 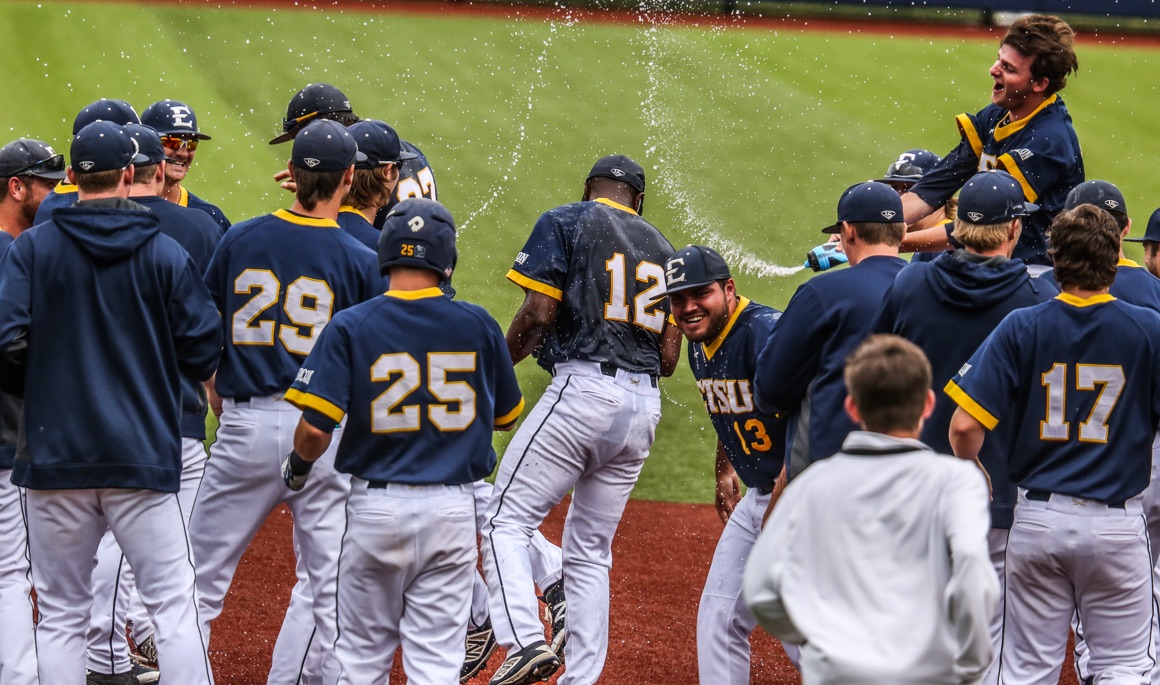 Kevin Phillips being mobbed by his teammates following his walk-off hit on Friday.
Phillips’ walk-off single lifts ETSU to series win over The Citadel
The Citadel at ETSU | May 20, 2016
Related Links

JOHNSON CITY, Tenn. (May 20, 2016) – The “Cardiac Bucs” used up all nine of their lives to complete the series win over The Citadel Friday afternoon at Thomas Stadium.

After scoring seven runs to erase a four-run deficit in the seventh, ETSU surrendered two runs in the top of the ninth before Hagen Owenby (Knoxville, Tenn.) and Kevin Phillips (St. Louis, Mo.) came through in the clutch in the bottom half of the inning. Owenby led things off with a ground-rule double to center – and after Aaron Maher (Brentwood, Tenn.) moved him to third on a ground out – Phillips took the first pitch he saw from Zach Lavery up the middle for the walk-off single lifting the Buccaneers past the Bulldogs, 10-9.

This marks ETSU’s first series win over The Citadel since 2004 when the Bucs swept the Bulldogs in Johnson City, while it improves the Bucs’ record to 25-28 overall, 12-11 in SoCon play … The Blue and Gold have now won nine of their last 11 conference games, while this also marks ETSU’s fourth walk-off victory of the season (Northern Kentucky, Purdue, Radford and The Citadel).

Despite being out-hit, 12-9, the Bucs still came through with four hits with runners in scoring position, while Andrew Lasure’s (Stanford, Ky.) pinch hit three-run homer in the seventh ignited the comeback … Lasure’s home run carried over the right field wall for his second of the season, while Trey York (Knoxville, Tenn.) – who belted a two-run dinger in the third – tied the game with an RBI double later in the frame.

Lasure’s home run was just the third of his career and first since going yard against Purdue back on March 6, while York’s homer marked his 15th of the campaign … Lasure’s 3-RBI were the most since he drove in four in last year’s comeback win at Morehead State … The round-tripper also marked his fourth hit as a pinch hitter this season.

ETSU won for just the fourth time this season when being out-hit.

Zach Lavery suffered the loss (2-6) as he was charged with three runs on three hits in two innings, while Clay Martin, Bret Hines and Jacob Watcher all had multi-hit efforts for the Bulldogs … Martin and Watcher finished with two hits and Hines posted a team-high three base knocks … Watcher started the game for The Citadel and allowed two runs on three hits in four innings.

Ben Peden and Barrett Charpia both homered in the loss, while the Bulldogs held a 5-0 lead after 2.5 innings and led 6-2 going into the bottom of the seventh.

Like they did in Thursday’s opener, The Citadel jumped out to an early lead as the Bulldogs plated three in the first and tacked on solo runs in the second and third to go up, 5-0. In the first, The Citadel picked up RBI singles from Stephen Windham and Jacob Watcher, while Windham later scored on a passed ball.

The very next inning, Windham came through with a sac fly RBI and Barrett Charpia homered for the second straight day as he led off the third with a solo shot to right-center.

ETSU chipped away at its deficit in the bottom half of the frame when Jeremy Taylor (Fayetteville, Ga.) walked and trotted home on Trey York’s home run, making it a 5-2 game.

Following a rocky start, Ryan Simpler came out of the Buccaneer bullpen to start the fourth and he did an excellent job keeping the Blue and Gold within striking distance. The sophomore right-handed hurler retired eight of the first 10 hitters he faced before issuing a two-out, two-strike home run to Ben Peden in the sixth. Simpler bounced back from the miscue by striking out Windham to end the inning.

From there, ETSU’s offense finally came to life as they struck for seven runs on three hits and took advantage of a costly error by Shy Phillips in right to take its first lead of the afternoon, 9-6. Blake Rowlett (Clarksville, Tenn.) led off the inning with a walk and advanced to second when Shy Phillips dropped a fly ball off the bat of Christian Bailey (Kingsport, Tenn.). Instead posting the second out of the inning, the error put runners on first and second when Andrew Lasure was called upon to pinch hit, and after taking two strikes and following off the third pitch, the senior catcher belted one over the right field wall to bring ETSU within a run. The Bucs tied it at six on York’s RBI double, while walks to Aaron Maher (intentionally) and Kevin Phillips loaded the bases. With two outs and nowhere to put Rowlett, Zach Lavery walked his third straight hitter and Robby McCabe capped things off with a two-RBI single to center, which scored Phillips and Maher.

The Bulldogs continued fighting as they scored three runs in the final two innings – all three runs coming home on sac fly RBIs – but after they allowed The Citadel to pull even at nine in the top of the ninth, ETSU made sure they weren’t going to disappoint the Buccaneer faithful. Owenby, Maher and Phillips all played a role in capping off the walk-off en route to lifting the Blue and Gold to their ninth conference win in 11 tries.

ETSU looks to sweep its third series of the season on Saturday afternoon at 1 p.m. … Saturday also marks Senior Day as 10 Bucs will be honored with a pregame ceremony.

Saturday’s game will be streamed live on the SoCon Digital Network, while live stats will be available via StatBroadcast on ETSUBucs.com.