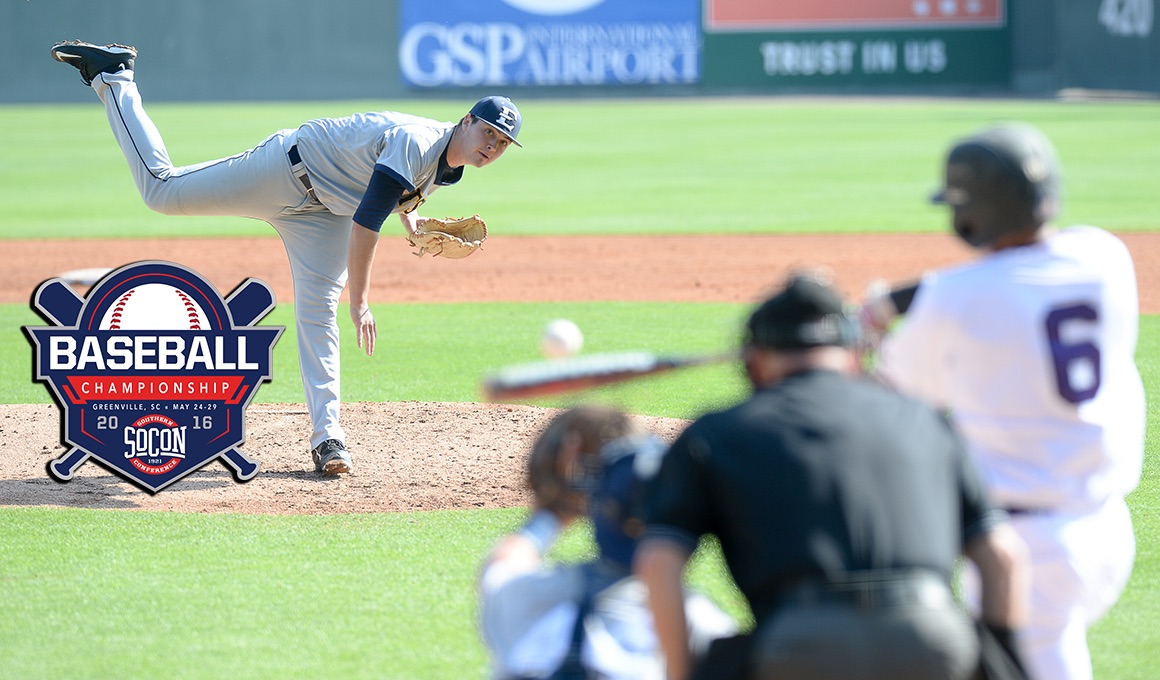 GREENVILLE, S.C. (May 25, 2016) – Furman’s Will Gaddis tossed a four-hit complete game shutout, while Griffin Davis provided the Southern Conference Pitcher of the Year all the offense he needed by leading off the bottom of the fifth inning with a home run as the fourth-seeded Paladins blanked No. 5 ETSU, 3-0, on Wednesday morning in the SoCon Tournament at Fluor Field.

This marked the third time ETSU was shutout this season (at Virginia Tech and at Wofford), while the four hits were the second-fewest registered by the Bucs  … The Blue and Gold entered the tournament with 601 hits, which ranked 15th nationally.

Gaddis – who threw 70 of his 99 pitches for strikes – improved to 10-3 … The Paladin right-hander also struck out eight and walked one … The four hits allowed were all singles, while he didn’t allow a Buccaneer base runner to reach second base after the second inning.

As a team, Furman out-hit the Bucs, 7-4, while junior outfielder Sky Overton drove in the other two runs with a two-out single up the middle in the seventh … Jake Crawford – a SoCon All-Freshman Team selection – led the Paladins with two hits.

Both teams squandered scoring chances early as Furman left runners on second and third in the first, while ETSU did the same in the top of the second.

In the bottom of the first, the Paladins put two runners on with two outs and they advanced to second and third on a wild pitch, but Haeberle got out of the jam by striking out Jordan Simpson swinging.

ETSU threatened in the top of the second as Aaron Maher and Kevin Phillips led things off with back-to-back singles to left, but after Blake Rowlett moved the runners over on a sac bunt, Gaddis got Robby McCabe (New Port Rickey, Fla.) to fly out to shallow center and induced Andrew Lasure into an inning-ending ground out to first.

From there, the game became a pitchers’ duel as Haeberle and Gaddis hung up goose eggs until the leadoff homer by Griffin Davis snapped a run of nine straight Paladins hitters being retired, making it a 1-0 game in the fifth.

Following ETSU’s second inning scoring opportunity, the Bucs had a runner reach in the third, sixth, seventh and eighth innings, but they had no answer for Gaddis. In the third, Trey York (Knoxville, Tenn.) reached via an error and Hagen Owenby (Knoxville, Tenn.) worked a two-out walk in the sixth. Rowlett and Lasure both singled in the seventh and eighth, but Gaddis induced a pair of inning-ending double plays to stop any chance of a comeback.

After Ryan Simpler worked out of a bases loaded jam by striking out Andrew MacLatchie looking to end the sixth, the Buccaneer hurler couldn’t work out of trouble an inning later as Sky Overton laced a 3-2 pitch up the middle to extended Furman’s lead to 3-0.

ETSU sent its 2-3-4 hitters to the plate in the ninth, but Gaddis retired York, Owenby and Maher in order to cap off his first-ever complete game shutout.

The Bucs will now face the loser of Mercer-Citadel (currently in progress) in an elimination game on Thursday morning at 9 a.m.

Thursday’s game will be video streamed on the SoCon Digital Network, while live stats will be offered via StatBroadcast on SoConSports.com.