Baseball
Baseball
The Citadel at ETSU | May 26, 2016
BoxscorePlay-by-Play 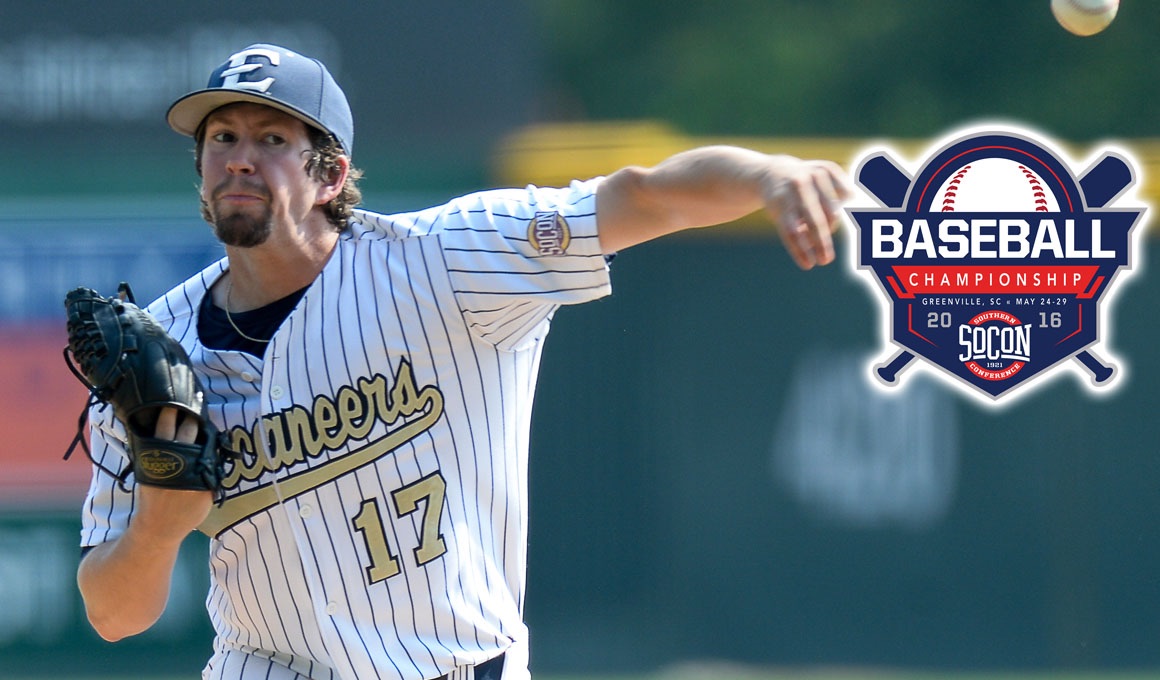 Jamin McCann struck out a career-high 10 hitters in Thursday's 4-2 win over The Citadel.
McCann’s gem carries ETSU past The Citadel, 4-2
The Citadel at ETSU | May 26, 2016
Related Links

Bucs to play either Western Carolina-Samford Friday at 3:30 p.m. in SoCon Tournament

GREENVILLE, S.C. (May 26, 2016) – With its back against the wall, ETSU junior left-hander Jamin McCann (Kingsport, Tenn.) stepped up and gave the Buccaneers the best outing of his collegiate career.

The ETSU southpaw gave the Blue and Gold eight innings of two-run ball and the Bucs held on to defeat The Citadel, 4-2, in an elimination game of the Southern Conference Championship on Thursday morning at Fluor Field in Greenville, S.C.

McCann faced two hitters in the ninth as he surrendered a leadoff ground-rule double and a single, forcing ETSU to make the call to the bullpen as junior righty Peyton Taylor (Kingsport, Tenn.) entered into the pressure situation. Taylor induced a sacrifice bunt to the first hitter he faced, while walking William Kinney on eight pitches to load the bases. After falling behind to pinch hitter Jacob Watcher 3-0 and nowhere to put him, Taylor threw a strike and then got Watcher to foul out to Kevin Phillips (St. Louis, Mo.) for the second out of the inning. Following a deep sigh of relief, Taylor struck out Clay Martin swinging on four pitches to secure the win.

ETSU now returns to action on Friday afternoon at 3:30 p.m. The Bucs take on the loser of Western Carolina-Samford in another elimination game. WCU and Samford play tonight at 7:30 p.m.

McCann – who improved to 8-4 on the season – set career highs in strikeouts, innings and pitches (127), while Taylor earned his team-leading fifth save of the campaign … McCann took a no-hitter into the fifth inning and scattered six hits on the day … The southpaw’s previous high for pitches thrown was 90 in start against Mercer back on 16, 2014.

McCann began the morning with 98 career strikeouts and notched No. 100 after striking out Clay Martin looking to end the top of the third inning … McCann’s 10-strikeout effort marked the first time a Buccaneer hurler struck out 10 since Griffin Krieg (Nashville, Tenn.) fanned 10 last April at VMI.

In total, McCann and Taylor combined for 11 strikeouts, moving ETSU’s season total to 423 which is eight shy of tying the program record … The record was set last year with 431.

Offensively, Jeremy Taylor (Fayetteville, Ga.) reached safely in all four plate appearances and scored three of ETSU’s four runs … Taylor went 2-for-2 with a double, walk and was hit by a pitch … Sophomore all-conference catcher Hagen Owenby (Knoxville, Tenn.) went 1-for-3 with two RBI, while Aaron Maher (Brentwood, Tenn.) and Kevin Philips drove in the other two runs for the Blue and Gold … Phillips joined Taylor with a two-hit game and drove in Maher with a two-out double in the third inning ... Trey York (Knoxville, Tenn.) recorded his 80th hit of the season with a first-inning single … York and Owenby both have at least 80 hits this season, marking the first time two Buccaneer players have accomplished the feat since 2010.

With the win ETSU – who has defeated The Citadel four times in less than a week – improved to 27-29, while the Bulldogs saw their season come to an end at 17-42 … The win marked the first time the Bucs defeated The Citadel in a SoCon Tournament game (previously 0-11) and it’s also ETSU’s first SoCon Tournament victory since defeating Furman in 2001 (The Bucs were in the Atlantic Sun from 2005-14).

Citadel starter Thomas Byelick suffered the loss (1-7) as he allowed four runs on four hits in four innings, while reliever Zach Lavery held ETSU scoreless on three hits in the final four innings … Right fielder Shy Phillips belted his first collegiate home run in the seventh, while William Kinney’s two-out RBI single put the Bulldogs on the board in the fifth.

ETSU jumped out to an early 1-0 lead in the bottom of the first as Jeremy Taylor was hit by a pitch, moved to second on Trey York’s single up the middle and advanced to third on a fly out by Hagen Owenby. From there, Taylor scored on an Aaron Maher RBI ground out to second, while York was stranded at third when Kevin Phillips hit into an inning-ending ground out to short.

The Bucs added to their lead in the third when Taylor worked a 4-pitch walk to lead off the inning and he scored on Owenby’s RBI single up the middle, while Phillips laced a two-out double to the gap in left-center which scored Maher, making it a 3-0 game.

Jamin McCann was in a groove as he retired 13 straight Bulldog hitters after Clay Martin reached on an error to leadoff the game, but his no-hit bid was broken up with a one-out double by Barrett Charpia in the fifth. Charpia eventually scored on William Kinney’s two-out single to left, but McCann limited the damage by forcing Taylor Cothran to ground into a fielder’s choice to end the inning.

The Blue and Gold got the run back in the bottom of the inning as Taylor reached for the third straight time on a double to left-center and scored on Owenby’s sacrifice fly RBI to right, pushing ETSU’s lead to, 4-1.

Shy Phillips’ solo home run in the seventh cut the Bulldog deficit in half, 4-2, and after The Citadel dodged a bullet in the eighth they threatened in the ninth. The Bucs had runners on the corners with one out in the eighth, but York was picked off first for the second out and Owenby hit a rocket shot to third for the final out of the inning.

The Bulldogs threw one last punch at the Blue and Gold, but like ETSU did all last week in Johnson City, the Bucs kept their composure and got of the bases loaded jam to secure the win.

ETSU advances on and will play in another elimination game on Friday afternoon at 3:30 p.m. … The Bucs take on the loser of tonight’s Western Carolina-Samford game.