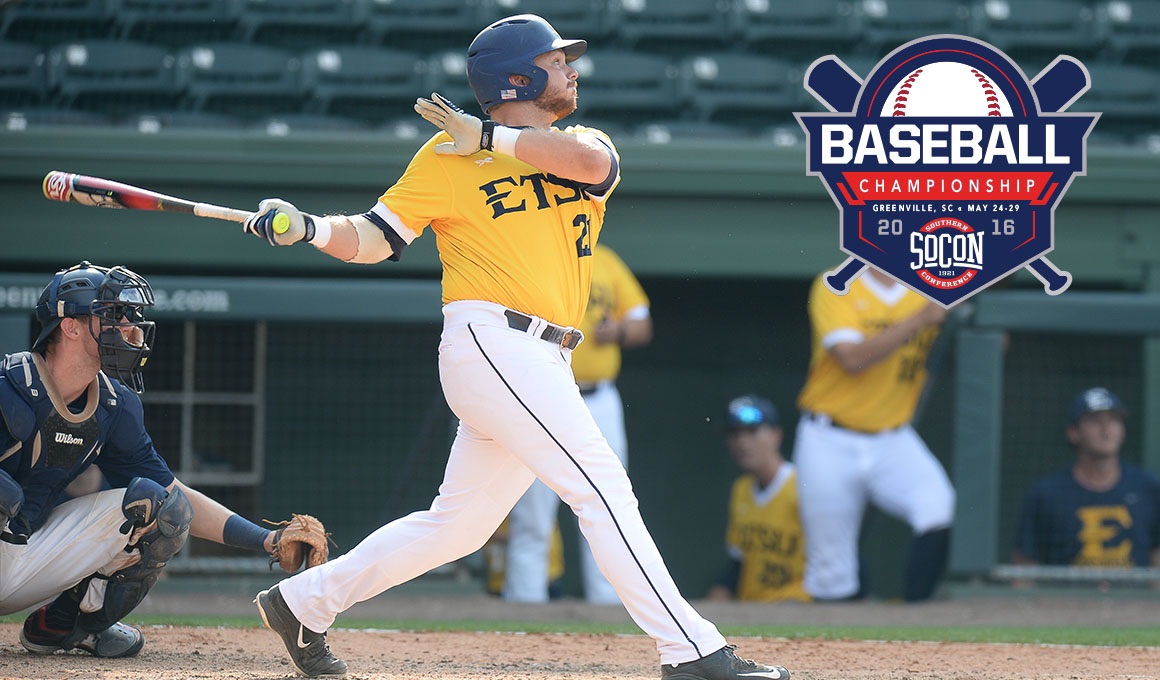 GREENVILLE, S.C. (May 27, 2016) – Despite taking a seven-run lead into the bottom of the seventh inning, the ETSU baseball team couldn’t hold on as Samford plated four runs in the seventh, three more in the eighth and capped off a 12-11 comeback win on Alex Lee’s walk-off single in the bottom of the 10th inning on Friday evening in an elimination game of the Southern Conference Championship at Fluor Field in Greenville.

The Bucs, who scored three runs in the top of the first inning, trailed 4-3 heading into the seventh inning … ETSU then rallied with eight runs in the frame, but it wasn’t enough to keep the Bucs’ season alive.

Hagen Owenby (Knoxville, Tenn.), Kevin Phillips (St. Louis, Mo.) and Andrew Lasure (Stanford, Ky.) all had two-hit games for the Blue and Gold – who were out-hit 17-10 in the contest … Lasure drove in two of the runs in the seventh with his third home run of the season, while fellow senior Robby McCabe (New Port Richey, Fla.) also plated a pair of runs earlier in the inning.

The eight-run inning marked the most runs scored by ETSU since plating 13 in a win at Eastern Kentucky on April 20 … Four of the eight runs came with two outs as McCabe’s single up the middle scored Phillips and Aaron Maher (Brentwood, Tenn.), while McCabe trotted home on Lasure’s blast over the “Green Monster” in left.

Owenby capped off his all-conference season with 88 hits – the most since 2010 when Paul Hoilman totaled 99 and Bo Reeder posted 89 … The Buccaneer catcher also belted 17 home runs, which were the most since Matthew Scruggs hit 20 in 2012.

Both York and Taylor registered their 200th career hits in 2016.

As a group, ETSU’s offense put up impressive numbers in 2016, as they recorded 622 hits (119 doubles, 15 triples and 75 home runs), scored 430 runs and hit .307 … The runs scored rank third all-time in program history, while the homers and hits both rank fourth in school history.

Senior right-hander Griffin Krieg (Nashville, Tenn.) got the start in his final game and picked up the no-decision after allowing four runs on six hits and struck out seven in five innings of work … Sophomore righty Ryan Simpler (Lewes, Del.) suffered the loss (0-6) after he allowed two runs on three hits and struck out five in 2.1 innings.

As team, ETSU struck out 13 hitters on Friday en route to setting a new program record for strikeouts in a season with 436 … The number surpassed last year’s record mark of 431 … Senior right-hander Lee Haeberle (Hendersonville, Tenn.) accounted for 90 of those strikeouts, which ranks fifth in the SoCon.

Samford’s Wyatt Burns earned the win (2-2) after issuing three runs on four hits and struck out four in 3.2 innings of relief … Stephen Jones got the start for the Bulldogs and allowed five runs (four earned) on three hits, while walking five in 6.1 innings.

Offensively, the Bulldogs were led by Hunter Swilling, Heath Quinn and Alex Lee as they combined for 10 hits (four doubles and three home runs), seven runs scored and 11 RBI … Lee’s two-out, three-run home run to left-center tied the game at three in the first, while Swilling and Quinn hit back-to-back home runs in the seventh to pull Samford within three runs, 11-8 … Quinn eventually tied the game an inning later when his double to right-center scored three runs and Lee capped things off with his walk-off hit to left in the 10th.

ETSU ended its season with an overall record of 27-30, while the Bucs’ 13-11 SoCon record placed them fifth in the standings … Samford – who was swept by the Blue and Gold in the regular season – improved to 34-25 and advanced to face the winner of Furman-UNCG on Saturday afternoon at 3:30 p.m.

ETSU got out to a quick start as they plated three runs on one hit in the top of the first to take a 3-0 lead. Jeremy Taylor and Trey York worked back-to-back walks to start the game, while Hagen Owenby reached on a fielding error by Danny Rodriguez at short, which allowed Taylor to score on the play. From there, York crossed the dish on Kevin Philips’ RBI single up the middle and Owenby scored on a ground out by Robby McCabe.

Unfortunately, the lead vanished in a hurry as Samford put the first two hitters on to start the bottom half of the inning and Alex Lee took the first pitch from Krieg over the wall in left-center for a two-out, three-run homer to tie the game at three.

Following the first inning, Samford right-hander Stephen Jones faced the minimum until Taylor reached via a one-out error in the fifth, while Krieg kept the Bulldogs off the board until Lee doubled to left-center in the fourth and scored on back-to-back passed balls giving SU its first lead of the day, 4-3.

After ETSU’s offense was held scoreless for five straight innings, the Buccaneer bats came alive in the seventh as they struck for eight runs on seven hits to regain an 11-4 lead. The Bucs – who picked up RBI singles by York, Owenby and Maher in the inning – also saw McCabe drive in two with a two-out single up the middle and Lasure drove in the Buccaneer shortstop with a towering opposite field homer to left to cap off the scoring. Blake Rowlett (Clarksville, Tenn.) also had an RBI ground out in the marathon inning.

With momentum back on ETSU’s side, the Bucs looked prime to notch their second straight win in an elimination game; however, Samford had other plans in store.

The Bulldogs started chipping away at their deficit and pulled even at 11 after pushing across four in the seventh and three in the eighth. Swilling belted a three-run homer in the seventh, while Quinn followed suit with a solo shot to left on the next at-bat. Quinn provided the crushing blow an inning later when his bases clearing double tied the game up.

ETSU put the go-ahead run on second in the top of the 10th, but Burns left Seth Cunningham (Bristol, Va.) stranded after inducing Taylor into a deep fly out to center. From there, Quinn ripped a one-out double off the wall in left – and after giving Edens a free pass – Lee found the hole on the left side of the infield which allowed Quinn to score from second resulting in the walk-off win.