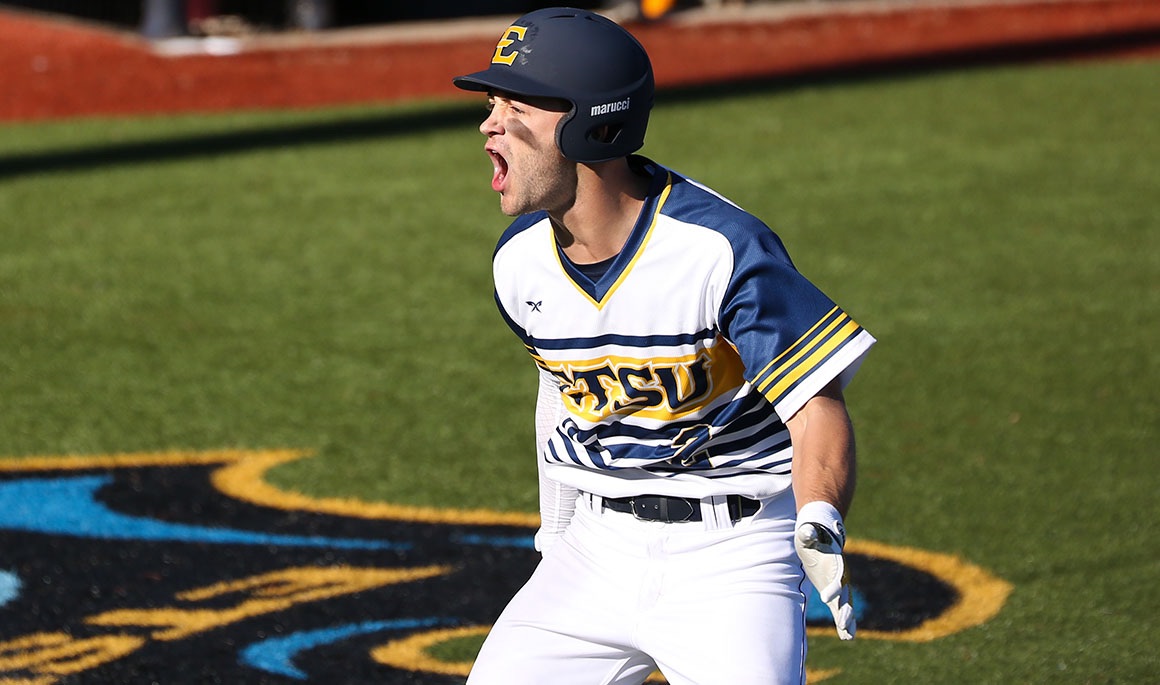 JOHNSON CITY, Tenn. (Feb. 17, 2017) – After the long wait for the 2017 season, ETSU baseball returned to the diamond on Friday and did so with a dominating 18-6 win over Central Michigan at Thomas Stadium. Aaron Maher (Brentwood, Tenn.), Chris Cook (Kingsport, Tenn.), and Hagen Owenby (Knoxville, Tenn.) led the surge for the Bucs as the “Triple Threat” combined for eight hits, eight runs, six RBIs, a double and a home run in the huge win over the Chippewas.

ETSU moves to 1-0 on the season as Central Michigan drops to 0-1. The second game of the three game series is scheduled for tomorrow at Thomas Stadium. First pitch is set for 2 p.m.

Maher was the hottest hitter in the ETSU lineup on Friday as he finished the day going 4-for-5 with a double, three RBIs and a pair of runs scored. The four hit night for Maher tied a career best for the Brentwood, Tenn. native. In his first game back in about a year, Cook went a perfect 3-for-3 with a home run, two RBIs and four runs scored out of the leadoff role. D1Baseball.com’s preseason freshman of the year, Cullen Smith (Lebanon, Tenn.), had an outstanding day in his collegiate debut as he contributed a pair of hits with a team-best three RBIs while touching home twice. Two Buccaneers each belted a home run to lead off the season. Cook connected with a solo homer to left, and Caleb Longley (Cleveland, Tenn.) crushed a three run homer with both homers coming in the third inning. Overall, the Bucs smacked 16 total hits and drove in 18 runs in the 12 run victory.

On the pitching side, opening day starter Ryan Simpler (Lewes, Del.) was lights out. He went five innings while allowing just one earned run and striking out five. He was just one strikeout away from matching a career best. Griffin Krieg (Nashville, Tenn.) and Victor Gonzalez (Jupiter, Fla.) pitched the six through eight innings, and Peyton Taylor (Kingsport, Tenn.) closed the door in the ninth without a hit and striking out one. As a pitching staff, ETSU did not surrender a walk, and Central Michigan averaged just over four walks a contest last season.

Simpler received the opening day nod for the Bucs, and he did not disappoint. The junior struck out the first batter he faced, and he forced Jason Sullivan to fly out foul to third base. After allowing a single in the frame, Simpler caught Daniel Robinson napping at first to end the inning.

The ETSU offense picked up right where it left off last year as the team cracked two hits and plated two runs. Cook took first after getting plunked on the sixth pitch of the leadoff at-bat, and he was able to swipe second on the next batter. The TD AmeriTrade Home Run Derby champion Owenby roped a single into left field where Cook scored. Following Owenby, the 38th round pick of the MLB First-Year Draft Maher drilled a single up the middle to put runners at the corners. Getting the start at first base, Christian Bailey (Kingsport, Tenn.) knocked a sacrifice fly down the right field line to make the game 2-0.

Nick Stokowski cut into the Buccaneer lead as he jumped on a fastball that he drove over the centerfield fence. The Chippewas tried to knot the game as Zach Gilles singled to right field, but Simpler struck out two Central Michigan batters to end the inning.

The ETSU bats erupted the second time through the lineup as the Bucs plated five runs on five hits highlighted by two home runs from Cook and Longley.

On the first pitch he saw, Cook crushed the first ETSU home run of the season. He turned on an inside pitch and hit a screamer over the left field wall. Following Cook, Maher kept his bat hot as he roped his second hit of the game. With a runner in scoring position, Bailey hit a hard ground ball through the right side to make the game 4-1.

With a runner on, Smith recorded his first collegiate hit on a ball up the middle. Longley worked the CMU pitcher late in the count and turned on a hanging pitch and took it over the left field fence for a three run homer to give the Blue and Gold a commanding 7-1 advantage.

In the top of the frame, Central Michigan threatened to cut into the lead again. The Chippewas leadoff batter was able to touch first after a fielding error by the Bucs. Sullivan put two runners on as he smoked a screamer at third base. However, Simpler came in clutch on the bump as he struck out the next two batters swinging and forced the final batter to fly out to left to end the threat.

In the fifth, Central Michigan was able to capitalize off the third ETSU error in the game as the Chippewas plated two unearned runs in the inning. The pair of runs all scored with two outs. Alex Borglin doubled to right, and Robins singled up the middle as the two players each recorded an RBI to account for the pair of runs.

Following an ETSU pitching change, CMU clawed its way back into the game as Daniel Jipping crushed a two run homer just right of center field. The two run blast pulled the game to 7-5.

All with two outs, Cook singled to right, and Blake Rowlett (Clarksville, Tenn.) and Owenby each drew a walk to make the bases loaded. Already with a pair of hits on the day, Maher came up clutch as he connected with a single through the left side to bring the ETSU lead back to four, 9-5.

For the fourth time in an inning, Central Michigan cut into the ETSU lead as Jipping knocked an RBI double to plate one to make the game 9-6 in favor of the Bucs.

The Blue and Gold not only matched but also took a commanding 18-6 lead in the bottom of the eighth as the Bucs plated nine runs. ETSU batted around in the inning as the team sent 13 batters in the frame. Highlights of the inning were: Maher’s RBI single, Smith’s bases clearing triple, Seth Cunningham’s (Bristol, Va.) two RBI single, Cook’s RBI single and Rowlett’s two RBI triple.