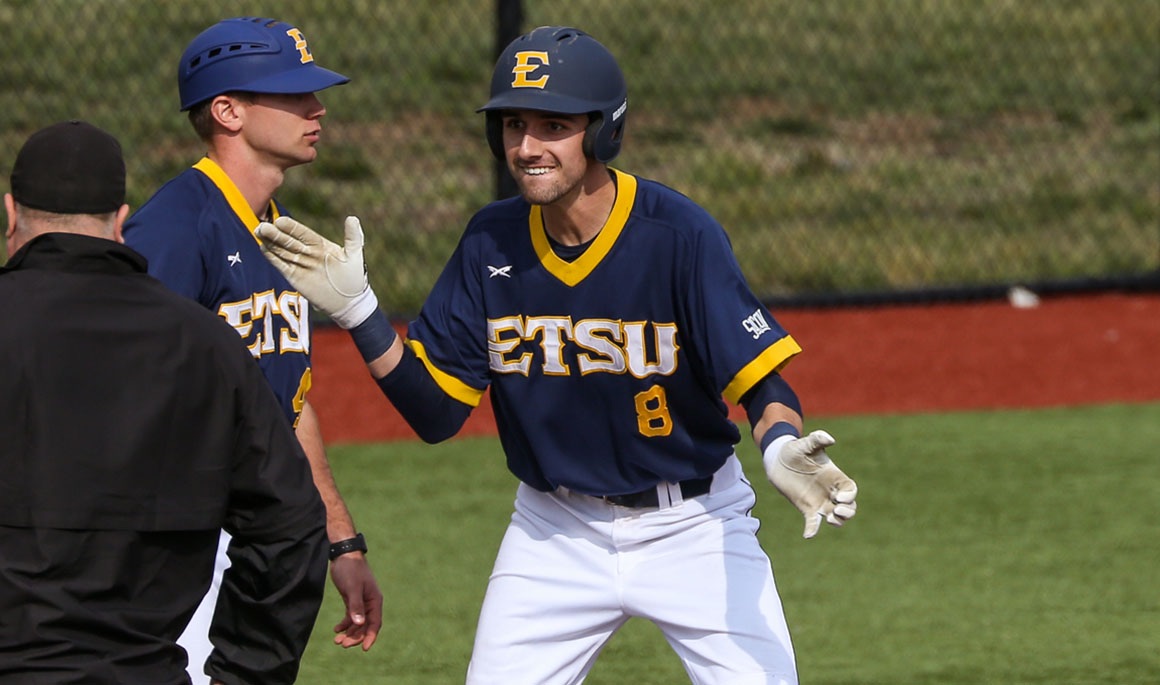 The Kingsport, Tenn. native made a gutsy dash for home plate in the ninth inning with two outs to give the Bucs the game tying run to push the game into extras. Bailey not only scored the game-winning run, but he slapped the game-winning, walk-off hit in the bottom of the 10th to give ETSU the 2017 opening series win over the Chippewas.

The series victory for ETSU gives the Bucs a series win or split in four of the last five season series openers, which dates back to the 2013 Atlantic Sun Championship season.

Bailey stole the show with his late game heroics. The junior went 3-for-6 including a triple, 3 RBIs and a pair of runs scored. He delivered the game-tying run in the bottom of the ninth when Seth Cunningham (Bristol, Va.) outhustled an infield hit to shortstop for his second hit of the game. Bailey was on second at the time and was able to score on a gutsy call where he slid past the catcher to knot the game at 6-6.

Bailey not only provided the two most important runs of the game, but he lit the spark in the three run fifth inning where he crushed a two RBI triple to right-center to give ETSU its first lead of the game.

Teammate Chris Cook (Kingsport, Tenn.) has been unstoppable early this season as he recorded another four hits today in five at-bats. He scored three of the seven runs for the Bucs including the game-winner in the 10th. Blake Rowlett (Clarksville, Tenn.) provided an offensive surge in the series finale as he went 1-for-4 with two clutch RBIs in the third inning to retaliate to CMU’s first two runs. Cullen Smith (Lebanon, Tenn.) also stayed hot as he extended the ETSU lead in the fifth with an RBI single through the left side.

Even with the hitting being the highlight of the series, the ETSU pitching staff was lights out in the series. In the finale, the bullpen went 4.2 innings with one run off three hits and three strikeouts. Leading the way was senior Griffin Krieg (Nashville, Tenn.) who found his rhythm in the seventh and eighth innings as he faced just eight batters. The Nashville native struck out three batters and stood strong when the Central Michigan offense was threatening to score. Peyton Taylor (Kingsport, Tenn.) tossed the ninth inning and picked up the victory. He has appeared in all three games this season for the Bucs.

With the first two innings going quickly, the scoring started in the third inning. Central Michigan plated a pair of runs as Jason Sullivan crushed a two out, two RBI triple. However, the lead didn’t last long as Rowlett knotted the game up with his two RBI single to score Cook and Caleb Longley (Cleveland, Tenn.).

The Chippewas regained their second lead of the game as Daniel Jipping led off the inning with a double. Robert Greenman plated his teammate off a suicide bunt that turned into a hit.

Central Michigan doubled its lead to two runs in the fifth frame with a single from Jipping. All with two outs, Nick Stokowski reached on an error by the Bucs, and Zach Gilles followed with a single through the right side. To score one, Jipping knocked a ball in between short and third to pull ahead 4-2.

The Bucs did not back down though as they answered with three runs to tie the game for a second time. Cook set the tone in the inning with a lead off double down the left field line. Following a walk and both runners advancing on a groundout, Bailey crushed his first triple of the season off the wall in right center. The two RBI hit knotted the game back up at 4-4. However, the Bucs weren’t done in the inning as Smith slapped a single through the side to take the lead for the first time in the game, 5-4.

CMU did not make it easy as it tied the game up again at 5-5 in the sixth. Greenman led off the inning with a double to right-center, and Alex Borglin plated his teammate with a double of his own to right field. Krieg minimized the damage in the inning as he got the final two outs with just five pitches.

Both Central Michigan and ETSU shut down the opposing lineups in the seventh and eighth innings. Both teams only combined for one hits, which was a single by CMU.

The game started to get interesting in the final inning as the Bucs and Chippewas were deadlocked at 5-5. CMU led off the inning with back-to-back walks, and the team was able to get the bases loaded following a single to third base. Krieg struck out the next batter, but David Cole reached on a fielder’s choice, which scored a run to give Central Michigan the narrow 6-5 advantage. Krieg shut down the CMU threat and left two runners stranded after out Greenman for the final out.

With one out, Aaron Maher (Brentwood, Tenn.) turned the tables and put a runner on as he connected with a single to center field. Bailey hit a slow roller to second base, where CMU tagged Maher out but couldn’t get Bailey out at first. With two outs, Smith drew a five-pitch walk. Cunningham came up to bat with two outs and a runner at second. After battling and fighting off six pitches, he hit a slow ball to short. The throw to first did not get Cunningham in time, but Bailey turned to run home since there were two outs. The first baseman was caught off guard and bobbled the transition and made a late throw to home to allow Bailey to score the game-tying run to push the game into extras.

For his third straight game, Taylor made the jog out from the bullpen to shutdown the Chippewas. He made quick work of the batters as he ended the inning with a tailor-made 6-4-3 double play.

With momentum on their side, the Bucs rallied with one out, and the first person to lead the surge was Cook. He hit a single through the left side to give ETSU a runner on base. Following a fly out, Owenby connected with a single of his own that gave ETSU runners at the corners. Central Michigan intentionally walked Maher, which gave Bailey another chance to be a hero. With the bases loaded, two outs and in a walk-off situation, the Kingsport, Tenn. native did not disappoint. He was patient in the at-bat and found a pitch over the outer half of the plate that he pushed through the right side. The hit scored Cook from third and gave the Blue and Gold their first series win and first walk-off win of the year.