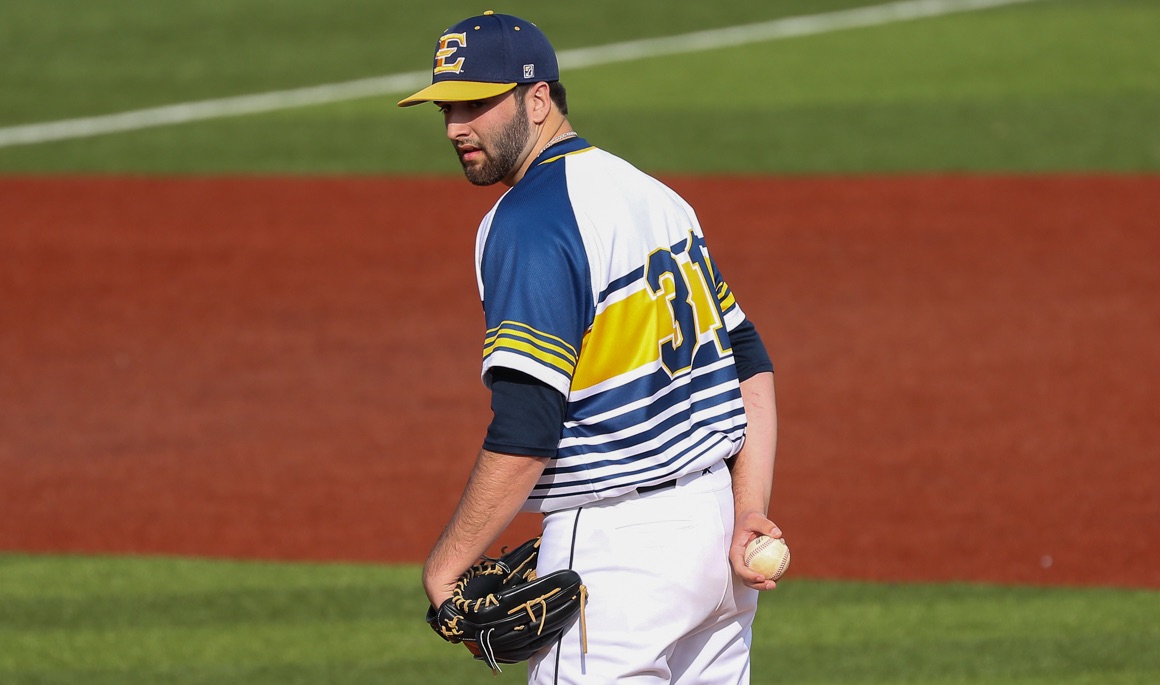 Korzybski – who made his first ETSU start – allowed two runs (one earned) on three hits with three strikeouts to earn the win (1-1), while three Buccaneer relievers held Oakland to two hits in the final three innings. In total, Korzybski, Daniel Shaw (Memphis, Tenn.), Matt Turner (Knoxville, Tenn.) and Dillon Cate (Sevierville, Tenn.) held the Golden Grizzlies scoreless for the final eight innings while striking out seven batters. Shaw and Cate each struck out a pair of batters in their inning of relief on Tuesday.

As a team, the Blue and Gold pounded out 16 hits with six Buccaneer sluggers posting multi-hit games – including Christian Bailey (Kingsport, Tenn.) and Hunter Parker (Chattanooga, Tenn.) leading the way with three hits each. This was the fourth consecutive game for the Blue and Gold to connect with double-digit hits. Hagen Owenby (Knoxville, Tenn.) and Caleb Longley (Cleveland, Tenn.) led the squad with each recording a pair of RBIs on the day. Chris Cook (Kingsport, Tenn.) and Aaron Maher (Brentwood, Tenn.) each touched home twice to contribute four of the ten runs scored against Oakland.

With the win, the Bucs move to 3-1 on the season, and Oakland drops to 1-3. The final game of the two-game series starts Wednesday with first pitch scheduled for 3 p.m. at Thomas Stadium.

Both teams started the game swinging its bats. Oakland and ETSU combined for five hits in the inning including five runs scored. Myles Zilinksy led off the game on a fielding error, and Tyler Janish followed with a single to put two runners on base. Zach Sterry capitalized as he knocked a double to right field. Tyler Pagano followed with an RBI groundout to give the Golden Grizzlies their first lead of the game at 2-0.

The Bucs started swinging early as Cook got things started with a hit by pitch. Rowlett followed with a single, and Owenby plated Cook from second as he connected on a single up the middle. On the next play, Maher reached on a fielder’s choice, which allowed Rowlett to score from third base. The final run of the inning came off Bailey’s bat when he connected with a single up the middle to give ETSU its first lead of the day, 3-2.

Korzybski gained confidence on the mound as he only face seven Golden Grizziles between the second and third innings.

The ETSU bats caught a spark as the team extended its lead by three. The Bucs plated a pair of runs in the inning led by a RBI single by Seth Cunningham (Bristol, Va.) and a sacrifice fly by Longley. Following a Maher walk, Bailey singled to the left side, and Cullen Smith (Lebanon, Tenn.) walked to make the bases loaded. Cunningham dropped a hit in front of the right fielder, which scored Maher from third easily. On the second pitch he saw, Longley hit a sacrifice fly to right, which scored Bailey from third to give ETSU the 5-2 advantage.

Korzybski really found his groove in the fifth and sixth innings as he set the Oakland lineup down in order. It was his third time in the game he went 1-2-3.

The Bucs added insurance runs in the fifth highlighted by seven hits including a pair of doubles. Longley started the scoring for ETSU in the frame as he connected on an opposite field single to right field. Parker followed with a double of his own to right field, which scored Smith from second and put two runners in scoring position with two outs. After a pitching change, ETSU belted three straight RBI hits by Cook, Rowlett and Owenby. After batting around in the inning, Oakland struck out the final batter to hold the ETSU lead at 10-2.

The ETSU bullpen was stellar, as it did not surrender a run in the final three frames. Korzybski tossed the sixth inning where he allowed the first two batters to get on, but he forced Pagano to hit into a double play to end the threat. Pitching in the seventh and eighth innings, respectively, Shaw and Turner were lights out as the pair made their ESTU debut. Shaw struck out a pair swinging, and Turner needed just 10 pitches to set the Oakland lineup down in order.