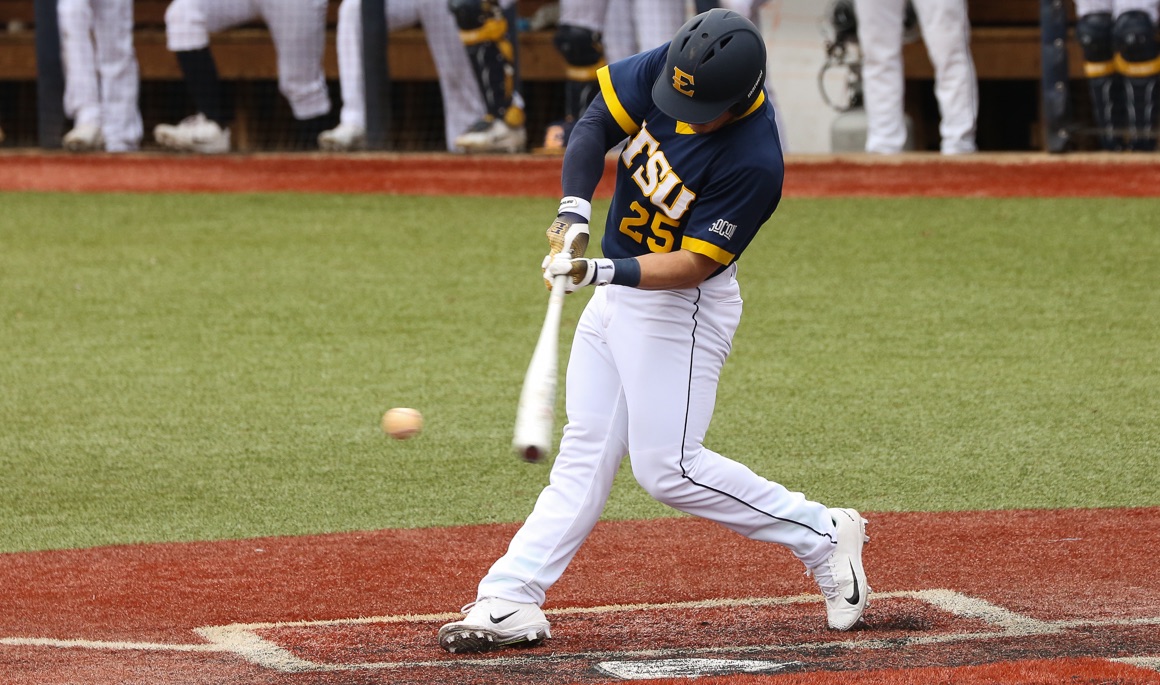 For the second time in three games, the ETSU baseball team delivered a walk-off hit as senior Blake Rowlett (Clarksville, Tenn.) finished the extra inning affair on Wednesday with a two-run home run to right to lift ETSU past Oakland 9-7 at Thomas Stadium.

Christian Bailey (Kingsport, Tenn.) hit the first walk-off of the season for the Blue and Gold on Sunday against Central Michigan, and just three days later, Rowlett crushed a walk-off home run to right field in the bottom of the 12th inning.

In a back-and-forth affair, both teams showed resiliency as there were five lead changes and four ties in the extra inning game.

One of the biggest moments of retaliation by ETSU came in the 10th inning after Oakland scored a pair in the top of the frame. Zach Sterry connected on his second home run of the night that flew over the left-center field wall, but the Bucs rejoiced and capitalized off an Oakland miscue and great base running to tie the game with a pair of runs.

In the 12th inning, Hunter Parker (Chattanooga, Tenn.) – who had a 5-for-6 performance on Wednesday – led off the inning with a single. Parker eventually stole second to get into scoring position, but Rowlett’s towering home run to right would have scored him from any base. ETSU teammates swarmed Rowlett as he touched home after delivering the second walk-off of the season for the Bucs.

Parker was phenomenal at the plate on Wednesday. He recorded five hits including a pair of a doubles and a stolen base. In three leadoff opportunities, the Chattanooga, Tenn. native went a perfect 3-for-3 on the night.

Every starting ETSU batter had a hit, but the most memorable at-bat was Jackson Greer’s (Knoxville, Tenn.) first collegiate at-bat. The freshman turned on an inside pitch in the second inning and hit a screamer over the left field fence to give him his first collegiate home run.

The five through seven hitters for the Bucs - Bailey, Cullen Smith (Lebanon, Tenn.) and Seth Cunningham (Bristol, Va.) - had a great game on Wednesday as the trio each recorded a pair of hits on the night. Smith led the three Buccaneers as he tallied two RBIs, which came off his bases loaded single in the first inning to tie the game at 2-2.

Chris Cook (Kingsport, Tenn.) and Rowlett each recorded a pair of RBIs, and Hagen Owenby (Knoxville, Tenn.) and Cook led the team as each walked three times.

Aside from showcasing ETSU hitting, the pitching was dominant again as the whole staff – six pitchers – combined for 16 strikeouts while each recording at least one strikeout on the night.

Starting pitcher Victor Gonzalez (Jupiter, Fla.) recorded most of those strikeouts as he struck out six batters in four innings. Griffin Krieg (Nashville, Tenn.) was the first reliever to appear from the bullpen, and he worked two innings without a hit or a run and struck out a pair. Logan Gentry (Kingsport, Tenn.) saw his first playing time of the season and went two innings with one run off one hit and striking out two. Dillon Cate (Sevierville, Tenn.) and Connor Bartow (Jonesborough, Tenn.) were lights out in the final two innings as neither let up a hit or a run while only facing seven batters combined.

The Rowlett walk-off win moves ETSU to 4-1 on the year and drops Oakland to 1-4 on the season. The Bucs will welcome Western Michigan to Thomas Stadium for a three-game series starting on Friday, Feb. 24.

Oakland started the scoring as Tyler Janish drew a four-pitch walk with one out. Two batters later, Tyler Pagano connected with a two-run homer to take the early 2-0 lead.

ETSU retaliated in the bottom half as Smith hit a two out, two RBI single to right field. The pair of runs scored as the bases were loaded for the freshman.

After Gonzalez went 1-2-3 against the Oakland hitters in the top half of the inning, ETSU earned its lead of the game in the bottom of the frame. Greer turned on an inside pitch and rocketed his first collegiate home run in his first collegiate at-bat over the left field fence. After a Parker double and a wild pitch, Cook hit a groundout to shortstop, which allowed Parker to score standing.

Following a scoreless third inning by both teams, Oakland tied the game for a second time as it recorded two runs. The first run came off a Zach Sterry solo homer, and the second run scored off a sacrifice fly to left field.

After shutting down the ETSU lineup for four straight innings, the Golden Grizzlies regained the lead in the seventh as they plated a run in the frame. Ben Hart led off with a four-pitch walk, and two batters later, Myles Zilinsky stroked a double to right to score his teammate from second to give OU the narrow 5-4 lead.

After being shut out for five straight innings, the Bucs tied the game again as Parker delivered a two out double to left center.

Smith led off the inning with a single to short, and Cunningham followed with a single of his own. Caleb Longley (Cleveland, Tenn.) appeared in a pinch-hit situation and nearly blew the game open as he just missed a three run bomb to dead away center. However, Parker was able to score one as he split the left-center gap to score Smith from second base to tie the game up at 5-5.

Neither team could find the game-winning run in the ninth, but both teams would score two runs in the tenth inning to continue the extra inning game. Sterry hit a crucial one out, two run home run to left-center field to give Oakland the two run lead heading into the bottom of the inning.

However, ETSU showed resiliency again as it matched with a pair of runs.

Parker led off the inning for a second time and slapped an opposite field single to left. Cook hit a dribbler to short, and with smart base running, Parker swiped third with no one covering. However, Oakland attempted a throw to third, which caused an error that allowed Parker to trot home and put Cook at second. Following a ground out that moved Cook to third, Owenby cued a ball off the bat between second and first, which gave Cook just enough time to score to tie the game for a fourth time.

After a dominating eleventh and twelfth inning by Cate and Bartow, the Bucs had a fourth chance to win in a walk-off.

For the third time in the game, Parker led off the inning with a single. After a fly out, Parker swiped second for his second stolen base on the year. After working a full count and seeing seven pitches in the at-bat, Rowlett turned on a down and in pitch and crushed a towering ball to right field. The Oakland right fielder made everyone hold his or her breath, but the ball had enough power behind it as it found its way out of the park.