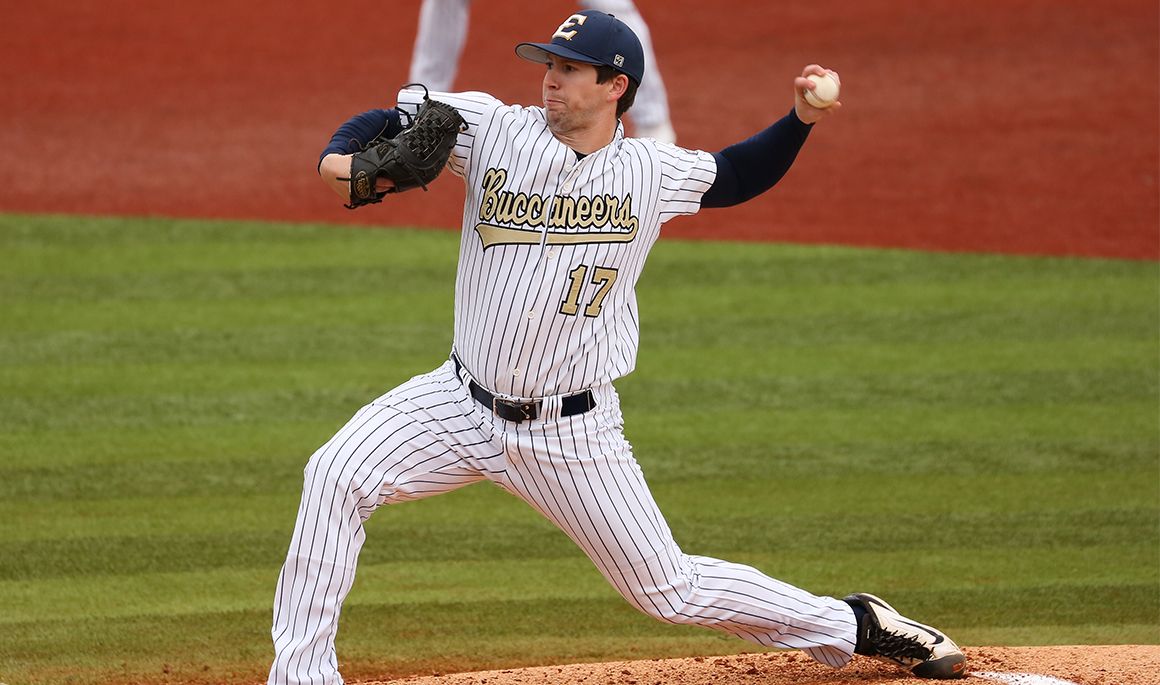 JOHNSON CITY, Tenn. (Feb. 23, 2017) – Following two series wins to open the 2017 season, the ETSU baseball team will look to take another series victory as the Bucs take on Western Michigan at Thomas Stadium for a three game set starting on Friday, Feb. 24 at 3 p.m.

The Bucs and Broncos will meet for the first time in their history this weekend. ETSU has played three straight teams from Michigan, and the Bucs are 4-1 in such games.

Friday’s game will be broadcasted via the Buccaneer Sports Network YouTube page. The link for the stream can be found to the right. Parker Schwartz will handle the play-by-play duties, and Fielder Dennis will be the color commentator for the series opener.

The Bucs have shown resiliency in the early part of the season highlighted by two walk-off victories in extra innings. Christian Bailey (Kingsport, Tenn.) hit the game-winner in the series finale against Central Michigan, and just last night, Blake Rowlett (Clarksville, Tenn.) hit a towering home run in the 9-7 win over Oakland.

ETSU is currently 4-1 on the year and are winners of three straight games. Leading the way are two juniors – Chris Cook (Kingsport, Tenn.) and Hunter Parker (Chattanooga, Tenn.). The pair each have a team-leading 12 hits on the year. Parker leads the team with three doubles, and Cook is first in runs scored with 12. Nipping at their heels are also another pair of juniors – Bailey and Aaron Maher (Brentwood, Tenn.). The duo each has 10 hits including a pair of doubles on the season. D1Baseball.com’s Preseason SoCon Freshman of the Year, Cullen Smith (Lebanon, Tenn.), has hit the ground running in the middle of the lineup as he is hitting at a .375 clip with six RBIs and is tied for first on the team in walks (7). Also, Rowlett is tied for first on the squad with a pair of homers on the season.

The three opening weekend starters for ETSU showed poised in their season debut as Simpler, McCann and Smith each went at least five innings in their respective start. Simpler led the surge with five strikeouts, and McCann struck out five Chippewas on Saturday. Smith tossed 5.1 innings while allowing four earned runs in his first start of 2017. Peyton Taylor (Kingsport, Tenn.) has been an invaluable bullpen pitcher as he has come on to pitch in four of the five games this year. He sports a 1.80 ERA and is 1-0 on the year. Just behind him is the red-shirt senior Griffin Krieg (Nashville, Tenn.) who has a 3.52 ERA and limits opponents to a .160 batting average.

ETSU has shown five relief pitchers without a start this season, and the five pitchers have allowed just one run in seven innings of work. They have also totaled an astounding ten strikeouts along the way.

The Broncos made an NCAA Tournament appearance last season after running through the Mid-American Conference Tournament. WMU was a seven seed in the MAC Tournament, and the team nearly had a perfect run en route to the MAC title.

The biggest loss after the 2016 season was seeing their star pitcher Keegan Akin get drafted in the second round of the MLB Draft by the Baltimore Orioles. Last season for Western Michigan, he started in 17 games and sported a 7-4 record with a 1.82 ERA in 109 innings. He also struck out 133 batters while limiting opponents to a .192 batting average in 2016. After signing with the Orioles, he was called to the Aberdeen IronBirds where he started nine games but only tossed 26 innings while allowing three earned runs. He also managed to strike out 29 batters and walk seven.

This season WMU has played tough competition as the team traveled into Atlanta, Ga. to face Georgia Tech, Kennesaw State and Georgia State. The Broncos added a last minute game this week as they hosted Grace College where WMU picked up its first win of the season (9-1).

On the current Western Michigan roster, the Broncos have five batters hitting over .333 with at least 10 at-bats. Leading the team is Alex Goodwin who is 5-for-11 on the year with a pair of doubles and three RBIs. Connor Smith has shown the most power on the team this year as he leads the team with three extra base hits and four RBIs. Just last season, Smith was a Louisville Slugger freshman player as a shortstop for the Broncos.

As a pitching staff, they have struck out 44 batters in 33 innings pitched (1.33 strikeouts per inning).

Kyle Mallwitz has been a solid reliever for WMU as he has come out of the bullpen in three of the four games. He has struck out a team-best 11 opponents. Joining him is Brandon Petersen who has gone 2.1 innings without a run and five strikeouts.