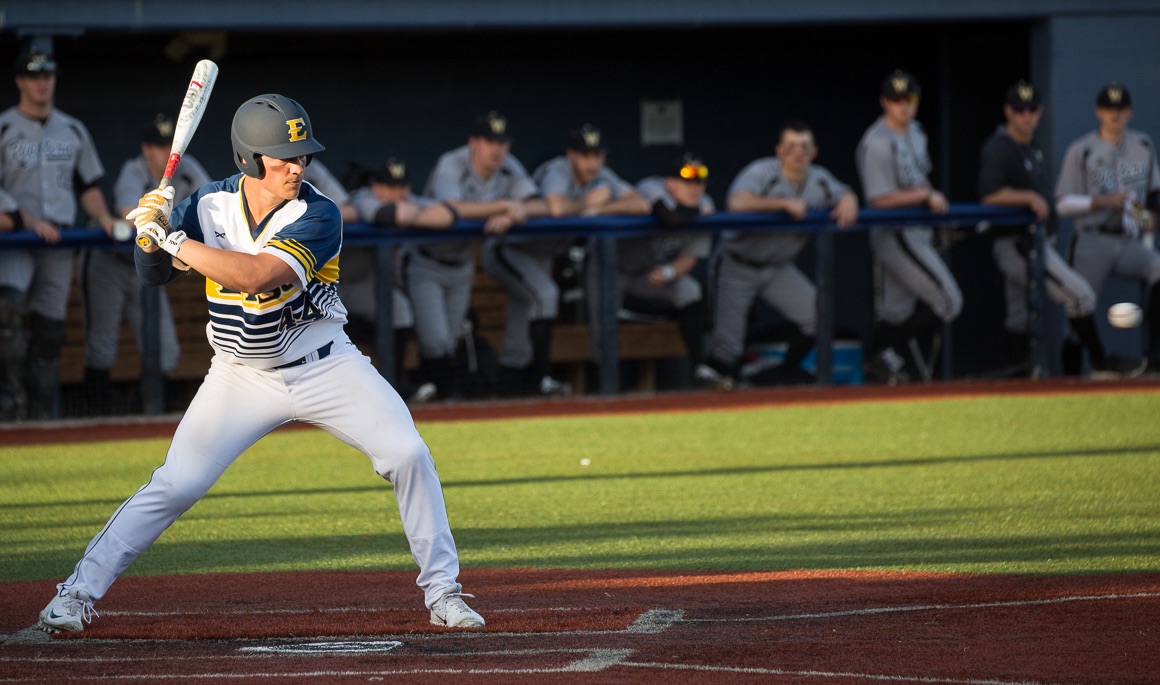 JOHNSON CITY, Tenn. (Feb. 24, 2017) – Scoring eight runs in the first two innings for ETSU baseball was enough as the Bucs went on to defeat Western Michigan 12-7 on Friday at Thomas Stadium for the fourth straight victory for the Blue and Gold.

Hagen Owenby (Knoxville, Tenn.) had his best game of the season as the junior knocked three hits on the day including a mammoth solo home run in the second inning for his first of the year. He finished the day with two RBIs and a three runs scored. Freshman Cullen Smith (Lebanon, Tenn.) also had a career day as he knocked, a career-best, three hits and three runs scored. Seth Cunningham (Bristol, Va.) led the team plating three RBIs while connecting on a two RBI single in the second to give ETSU an 8-1 lead in the second frame. Caleb Longley (Cleveland, Tenn.) demolished his second homer of the season in the seventh inning. He hit the home run over the light pole in left field to add a pair of insurance runs in the seventh inning.

Starting pitcher Ryan Simpler (Lewes, Del.) earned his second victory on the season as he went five innings while striking out, a career-best, seven batters. Griffin Krieg (Nashville, Tenn.), Dillon Cate (Sevierville, Tenn.), and Peyton Taylor (Kingsport, Tenn.) all came out of the bullpen and combined for three innings without a run to score.

With the series opener win, ETSU are winners of four straight games and look to win Saturday to make it three straight series wins in the season.

Also, the Sunday finale against Western Michigan, Feb. 26, has had its start time moved to a 12:30 p.m. first pitch.

Simpler worked a quick first inning as the junior went 1-2-3 highlighted by a double play to short.

Smith followed with his second double of the season as he shot the ball off the left field wall to put two runners in scoring position and move the game to 3-0. Cunningham hit a dribbler to second, which scored Bailey from third easily. After a Longley four-pitch walk and a pitching change, Parker slapped an opposite field hit through the left side, which added another run to the ETSU lead to make it 5-0.

Tanner Allison chipped into the Buccaneer lead as he connected with a two out solo homer to dead center to make the game 5-1.

The Blue and Gold struck for three more runs with all three runs coming off an Owenby home run and a single from Cunningham. The TD AmeriTrade Home Run Derby Champion demolished his first home run of the season as he turned on a pitch and sent it into the parking lot in left field. Following a Maher single and a Bailey walk, Cunningham smacked a single up the middle to score his two teammates to make the game 8-1.

However, the Broncos retaliated as they plated three runs in the inning to cut the lead in half. Grant Miller hit a single through the left side with the bases loaded to score two. The next batter for WMU, Evan Nelson, scored the third run of the inning off a hard hit ball to center. Even with the bases loaded and one out, Simpler minimized the damage as he sat down the final two outs with strikeouts.

For his second hit of the day, Allison singled back up the middle to score a runner from second as the Broncos pulled the game to 8-5.

The Bucs matched, however, and scored an unearned run with two outs. Parker hit a ball to third base. The third baseman fielded the ball cleanly, but the tag at first base forced the ball loose, which allowed Smith to score without a throw.

Western Michigan - even though down five runs - did not give in. The Broncos chipped into the lead again as they plated a pair of runs in the inning. Following an ETSU pitching change, WMU struck for three hits in the inning. Miller flied to right field to score his teammate from third, and Nelson singled to center to pull the game to 9-7.

Three ETSU relievers – Krieg, Cate and Taylor - came on to close out the last three innings of the game. They did so in fine fashion as the Broncos couldn’t plate a run in the final three innings.

With the three late insurance runs, the Bucs went on to defeat the Broncos 12-7 in the series opener at Thomas Stadium.