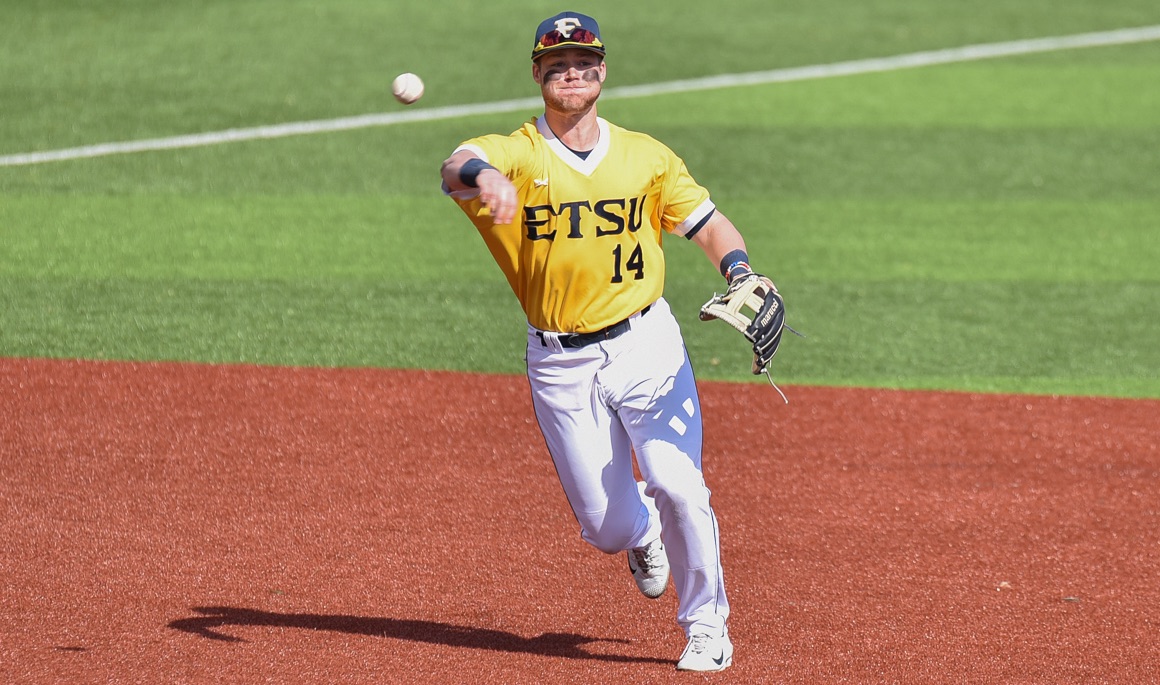 JOHNSON CITY, Tenn. (Feb. 25, 2017) – In the third-straight series win of the season, ETSU baseball bested Western Michigan on Saturday 12-8 as eight of the nine ETSU starters posted a hit on the game at Thomas Stadium.

The Bucs jumped out to an early 5-0 lead after the third inning. Western Michigan cut into that lead in the fourth inning, but the Bucs scored seven runs between the fourth and fifth innings to take the commanding 12-2 lead. The Broncos inched closer to ETSU as they scored six unanswered runs after the fifth inning.

Nearly every starter for ETSU recorded a hit in game two against Western Michigan. Leading the charge was Chris Cook (Kingsport, Tenn.), Hagen Owenby (Knoxville, Tenn.), Cullen Smith (Lebanon, Tenn.), and Caleb Longley (Cleveland, Tenn.) as the four Buccaneers each recorded two hits on the day. Christian Bailey (Kingsport, Tenn.) led the Buc offense as he brought home four RBIs, and the five through eight batters for the Blue and Gold tallied 10 RBIs off six hits. The one through five hitters for ETSU scored 11 of the 12 runs, while the entire ETSU team drew seven walks against WMU.

Jamin McCann (Kingsport, Tenn.) had a solid start against the Broncos as he went 5.2 innings while allowing three runs and striking out seven batters. Drew Korzybski (Knoxville, Tenn.) was the first reliever for the Blue and Gold, and he went 1.1 innings without a run. Peyton Taylor (Kingsport, Tenn.) closed out the game as he earned the first ETSU save of the season.

The highlight of the ETSU offense was going 7-for-8 in leadoff chances with Cook and Owenby both going 2-for-2.

ETSU has won its third-straight series of the season and moves to 6-1 on the year. Western Michigan drops to 1-5 on the season.

ETSU and Western Michigan will conclude the series on Sunday as the Bucs look to sweep the Broncos at Thomas Stadium at 12:30 p.m.

Just like game one against Western Michigan Friday, the Bucs started their offense early.

On Saturday, ETSU plated a pair of runs to take the early 2-0 lead. Cook started the offense with a walk, and Blake Rowlett (Clarksville, Tenn.) drove in his teammate off a double that rolled all the way to the left center field wall. Just two pitches later, Owenby singled through the left side, which gave Rowlett plenty of time to touch home for ETSU.

After taking the 2-0 lead, ETSU extended that advantage as the team plated another three runs in the third inning.

Starting the inning with a throwing error and an Aaron Maher (Brentwood, Tenn.) single, Bailey connected with his first hit of the afternoon as he split the left center field gap. The double scored both Maher and Owenby to give ETSU the 4-0 lead. Smith hit a missile up the middle that scored Bailey easily from second to make the game 5-0.

Leading the inning off for Western Michigan, Alex Goodwin and Jesse Forestell hit back-to-back singles to put two runners on. After a sacrifice bunt, Tyler Frank hit into a ground out which scored one Bronco. Nick Vogelmeier followed with an RBI single through the left side to pull within three runs.

However, ETSU’s offense exploded for five runs in the same inning. The Bucs drew three walks in the inning including a bases loaded walk from Bailey. Smith followed with a sacrifice fly to score Owenby from third base. On the seventh pitch he saw, Longley obliterated a pitch as he drove it straight into the batter’s eye in center field. The three run home run for Longley gives him a team-high three home runs.

Highlighting the fifth inning was a sacrifice fly out from Bailey, and a Smith RBI single to left center. The two-run frame for ETSU made the game 12-2.

Korzybski came in relief in the sixth inning and finished his outing in the seventh frame. He went 1.1 innings without a run to score and allowed just one hit in his outing.

The Buccaneer offense stayed stagnant through the late innings as they could only muster a pair of hits from Owenby and Longley.

The Broncos struck for a solo home run on the first pitch of the ninth inning to pull within four runs. After allowing back-to-back walks, Taylor came out of the bullpen for his sixth appearance of the season. In a save situation, Taylor cruised through the WMU lineup as went 1-2-3 to earn the first save of the season for ETSU.

McCann earned the win for ETSU and goes to 1-0 on the year. Jack Szott drops to 0-2 on the season, and Taylor earns the save.