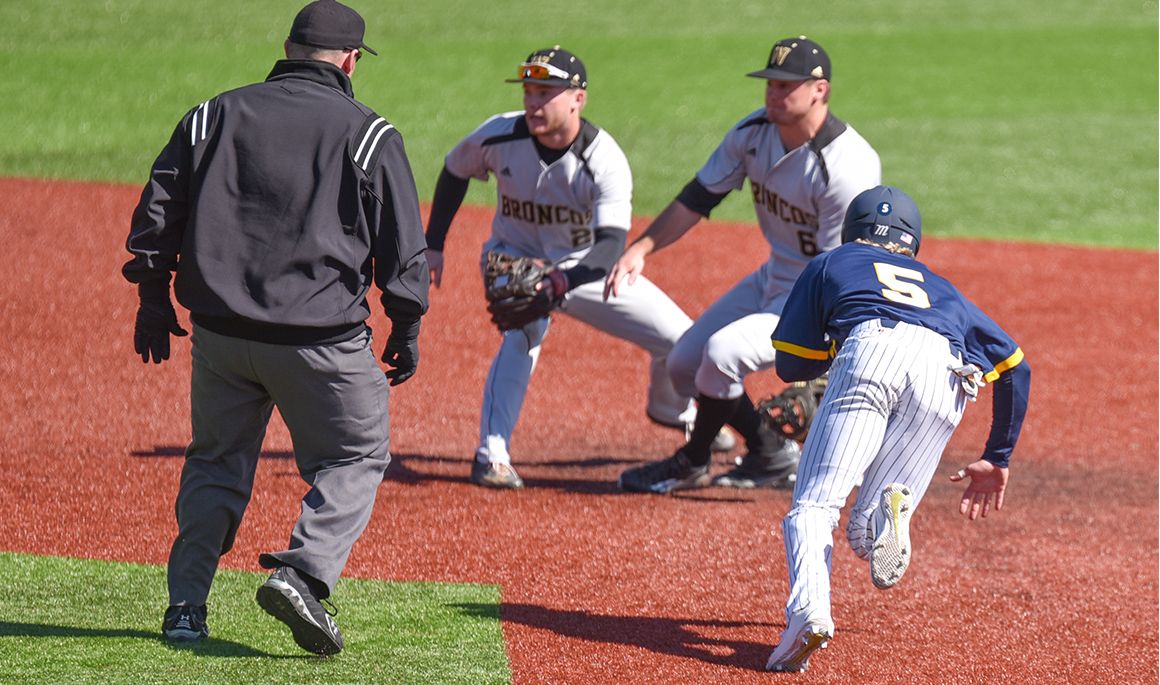 Coming into the series with Western Michigan, Hunter Parker (Chattanooga, Tenn.) was tied for first in the country in hits, and after a three-game series with WMU, he now leads the team with an impressive 16 hits in eight games.

Today the junior from Chattanooga knocked a team-best two hits including a gap-splitting double in the seventh inning. He also leads the Blue and Gold in doubles (4), slugging percentage (.741) and on-base percentage (.645) on the season.

The lone run for ETSU came off the bat of freshman Cullen Smith (Lebanon, Tenn.) when he connected on a single to center field to bring home Aaron Maher (Brentwood, Tenn.), who reached on a fielder’s choice earlier in the inning. As a rookie, Smith is third on the team with a .429 batting average including 11 RBIs on the year, which is second on the squad.

Blake Smith (Ninety Six, S.C.) earned the start on Sunday as he pitched in his second game of the season. The senior totaled 100 pitches in the game as he went six innings. He allowed four runs (one earned) with all of the runs coming in the fourth inning. He struck out three batters and scattered four hits in his second outing. In four of his six innings of work, he sat the Bronco lineup down in order.

The Buccaneer offense was limited to just six hits on the day, which breaks a seven game streak of double-digit hits. The offense also struggled with runners in scoring position as they went 1-for-9 including going 1-for-15 with runners on base.

The 11 runs allowed also is a season high as the Broncos scored most of those runs late in the game.

Despite the series finale loss, ETSU has won three straight series and has started its season 6-2.

The Bucs will take several days off from the diamond as they will rest up for their first road series of the season against Florida A&M. The three-game set begins Friday, March 3 in Tallahassee, Fla. at 4 p.m.

Blake Smith cruised through the first three innings as he faced the minimum batters in each frame. He started the game with just 11 pitches as he forced the first three Broncos to pop out or fly out.

After scoring in the first inning in four straight games, ETSU couldn’t muster a run in the first. The first three Buccaneers struck out and flew out as the Bronco starting pitcher, Jacob Piechota, went 1-2-3 to start the game.

Western Michigan started the inning with a runner reaching on a throwing error. After a sacrifice bunt, Grant Miller roped a double down the left field line to score the unearned run. Evan Nelson followed with a single to right field, which scored his teammate from second easily.

The Broncos took advantage of the Buccaneer miscue as Tanner Allison knocked his third home run of the series to right field, which scored a pair to make the game 4-0.

ETSU responded as Hagen Owenby (Knoxville, Tenn.) walked to lead off the inning, and Maher switched places with him following a fielder’s choice. Maher moved to second on a balk, and a batter later, Cullen Smith roped a single to center field, which gave Maher time to round third base and score to cut into the lead.

Blake Smith quickly rebounded after being rustled in the fourth inning. He faced the minimum in the fifth and just four Broncos in the sixth frame.

Western Michigan added to its lead after the Bucs made the call to the bullpen. The Broncos scored seven unanswered runs from the seventh inning on to eventually take the game 11-1.

Piechota earned his second win of the season and goes to 2-1, and Blake Smith was pinned with his first loss of the season (0-1).