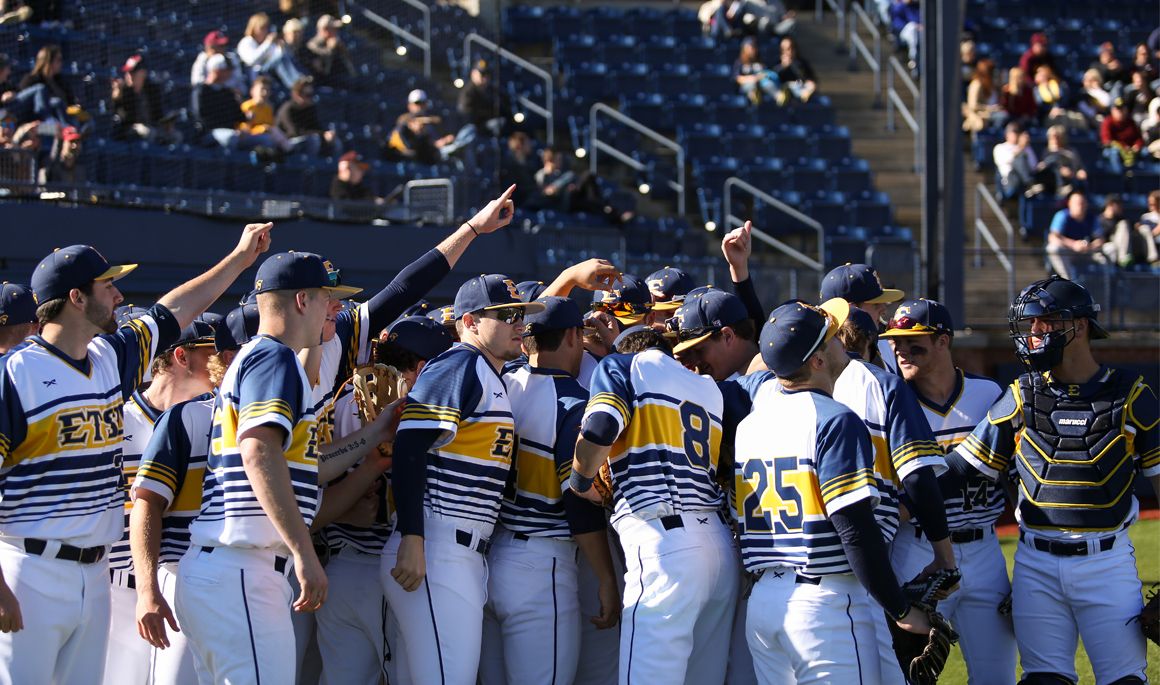 JOHNSON CITY, Tenn. (March 2, 2017) – Following three straight series victories, ETSU baseball will look to make it four consecutive as the Bucs travel to Florida A&M for its first road series of the season.

The three-game set is scheduled to begin Friday, March 3 in Tallahassee, Fla.

This is the first-ever meeting between the two ball clubs. The last time ETSU traveled to Florida was when the Bucs were part of the Atlantic Sun Conference as the team participated in the 2014 A-Sun Championships in Fort Myers, Fla.

Winners of five in the last six games, ETSU looks to win its fourth straight series of the season as the team travels to face Florida A&M this weekend. ETSU is 6-2 on the year with all of the games being played at Thomas Stadium.

The Bucs have six players hitting over .300 on the season. Hunter Parker (Chattanooga, Tenn.) leads the team with a .593 batting average including a team-best 16 hits. Parker is fifth in the country in batting average, ninth in on-base percentage (.645) and 17th in hits per game (2.0).

Just behind Parker is Chris Cook (Kingsport, Tenn.). The red-shirt junior totes a .438 batting average including a team-leading five extra-base hits. Cook has a .719 slugging percentage and a .561 on-base percentage as the ETSU leadoff hitter. He is also third in the country in runs scored (15) and runs scored per game (1.88).

The starting pitching is off and running as Ryan Simpler (Lewes, Del.), Jamin McCann (Kingsport, Tenn.), and Blake Smith (Ninety Six, S.C.) have combined for six starts this year. Blake Smith has the best ERA on the starting staff with a 3.97, and McCann has the best opponents’ batting average at .279. Simpler and McCann have combined for 23 strikeouts in 22.2 innings pitched.

Peyton Taylor (Kingsport, Tenn.), Griffin Krieg (Nashville, Tenn.) and Dillon Cate (Sevierville, Tenn.) each have come out of the bullpen at least four times this year. Krieg and Cate have appeared in four games each, and Taylor has pitched in six games this season. The trio have combined for 17 strikeouts in 20.2 innings of work. Krieg has an opponents’ batting average of .133, and Taylor has limited batters to a .214 average.

Florida A&M is off to a 7-2 start including a series sweep over George Washington where they won all three games by a walk-off hit.

FAMU has hosted a pair of Southern Conference members this season – Wofford and Mercer. The Rattlers are 4-1 in SoCon games this year, and they are fresh off a two-game sweep of the SoCon regular season champions Mercer. In the Mercer series, Florida A&M mustered runs in four innings whereas the Bears scored in nine of the 18 innings.

A week ago, Ben Ellzey was named the Mid-Eastern Athletic Conference player of the week after delivering the walk-off single against George Washington. He went 8-for-17 (.471) with two runs scored, three RBIs and a home run in the week.

Leading the Rattlers squad offensively is Kaycee Reese. He has recorded 13 hits in 30 at-bats this year. Providing most of the power in the lineup is Aubrey McCarty as he has a home run and a triple while plating a second-best on the team 10 RBIs on the year. Willis McDaniel has four extra-base hits, and Brian Davis has three (all doubles) and a team-best 13 RBIs.

The backbone of the Florida A&M team is its pitching staff. As a team, they have a combined 4.01 ERA including three saves in 83 innings pitched. They have limited batters to a .252 batting average with only four home runs allowed.

McCarty, a two-way player, is 1-0 on the year with two starts. He has totaled 12 innings and limits batters to a .227 batting average. Joining him is JoJo Durden who has started a pair of games and totes a 3.60 ERA.

Hunter Fillingim and Jamie Grant are one of the key relief pitchers for FAMU this year. Fillingim has a 1.59 ERA and a team-best two saves with eight strikeouts in 5.2 innings. Grant has appeared in five games and is 2-0 on the year, and he limits batters to a .237 batting average.