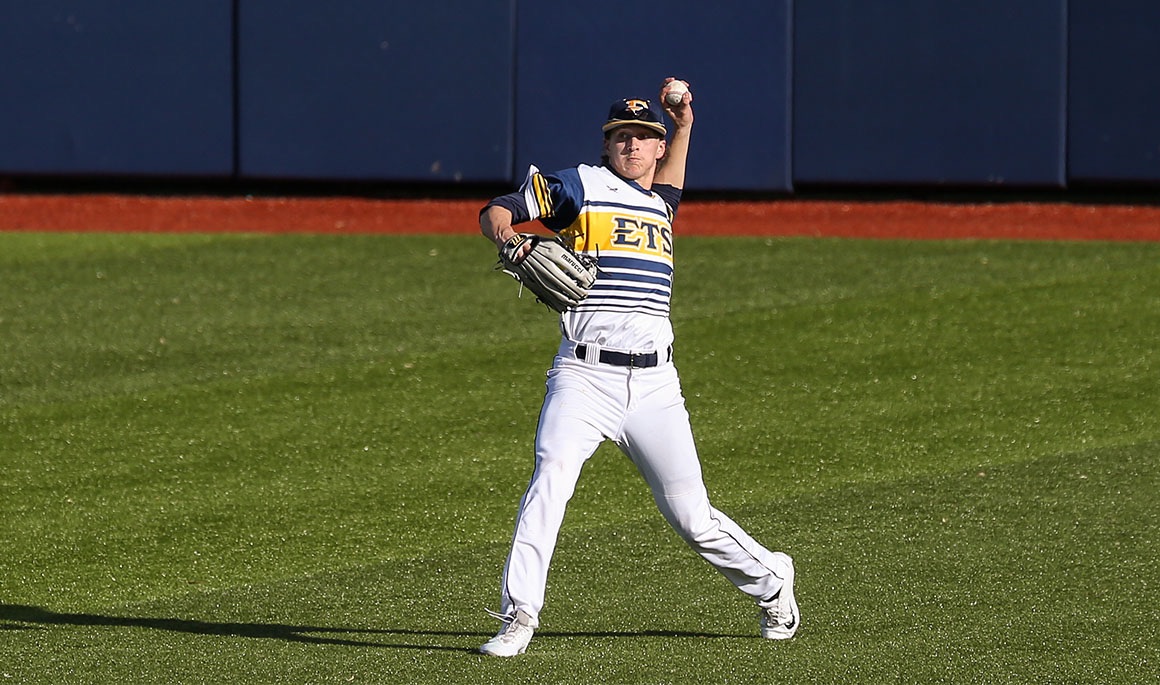 Four Buccaneers posted multi-hit games as ETSU mustered three runs in its first road contest of the season. Hunter Parker (Chattanooga, Tenn.) rallied for his sixth multi-hit game of the season and five in the last six games. Parker walked once and plated a run on the afternoon.

Joining him with a multi-hit performance was Aaron Maher (Brentwood, Tenn.), Christian Bailey (Kingsport, Tenn.), and Caleb Longley (Cleveland, Tenn.). Maher finished the day going 2-for-5 including smacking the only extra-base hit for the Blue and Gold.

Seth Cunningham (Bristol, Va.) had a 1-for-4 afternoon and either plated or scored all three runs for the Bucs (scored twice and drove in one). Despite only scoring three runs, ETSU went 4-for-12 with runners in scoring position, but the Bucs did leave 12 base runners stranded.

Ryan Simpler (Lewes, Del.) got the starting nod for the Bucs, and he went 5.2 innings on Saturday. He scattered three hits and struck out five Rattlers. Dillon Cate (Sevierville, Tenn.) finished the game for the Bucs as he went 1.2 innings without allowing a hit or run. The ETSU pitching staff limited the Rattlers to one hit in 12 chances with runners in scoring position.

With the win, Florida A&M are winners of six straight games as they move to 8-2 on the season. ETSU drops to 6-3 as the Bucs look to rebound in game two with first pitch scheduled for 1 p.m. on Saturday.

Bailey started the scoring in the game as he reached on an FAMU error. After advancing to second on a fielder’s choice, Cunningham hit a single to right field to plate Bailey. Longley followed with an opposite field single, which put runners at the corners. Parker scored Cunningham as he slapped a single down the left field line to make the game 2-0.

Florida A&M matched ETSU’s two runs as the Rattlers plated a pair in the frame. The inning started with a walk followed by a double to put two runners in scoring position. ETSU walked the bases loaded, and the Rattlers made them pay as they plated two runs off a throwing error.

Both teams exchanged a run in the inning to make the game 3-3.

ETSU scored its run off a Florida A&M fielding error as Cunningham scored from third with one out, and the Rattlers scored theirs off a groundout to score a teammate.

The FAMU bats exploded in the sixth frame as it scored three runs with all three coming off Brian Davis’ bat. After a pitching change, Davis knocked a three-run home run to double the lead, 6-3.

The Rattlers added insurance in the inning as Garrett Wilkinson doubled down the right field line for his second hit of the game.

Maher tried to start a rally in the final inning as he doubled down the left field line with two outs. Bailey followed with a single through the left side, but Florida A&M brought in its closer and struck out Cullen Smith (Lebanon, Tenn.) swinging to end the game.

Jamie Grant remains undefeated as he moves to 3-0 on the season, and Simpler was pinned with his first loss of the year.