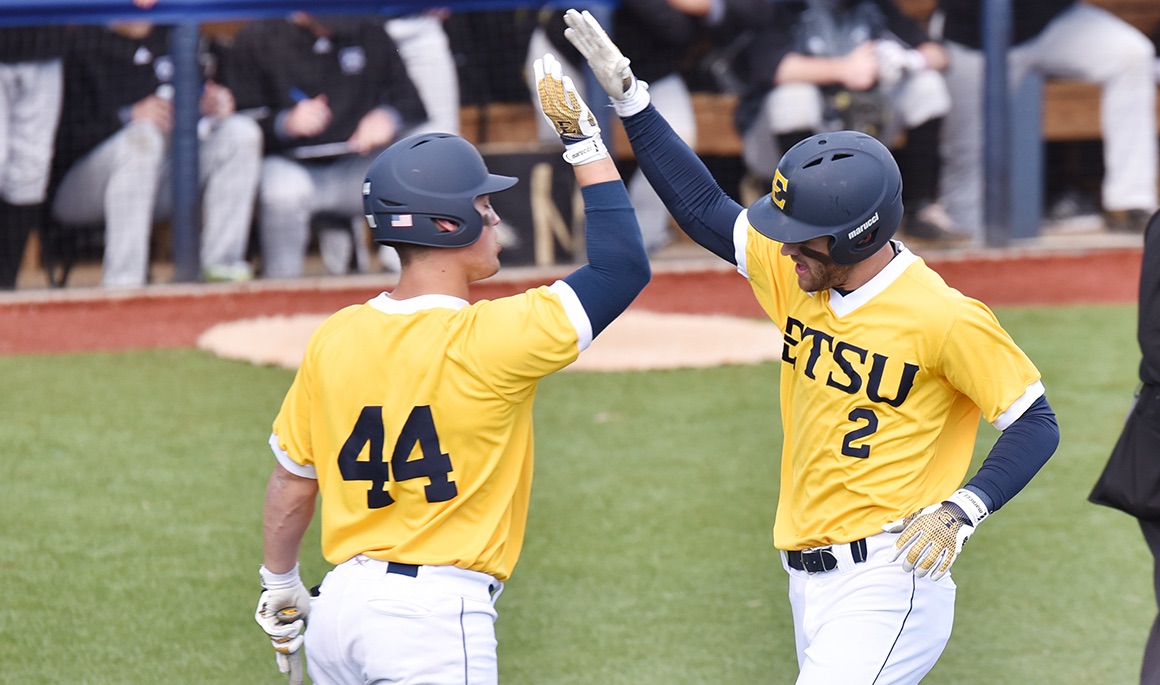 Chris Cook leads the team with four hits including plating the go-ahead runs in the ninth to give the Bucs the 10-8 victory.
Late rally powers Bucs past FAMU 10-8
ETSU at Florida A&M | March 04, 2017
Related Links

TALLAHASSEE, Fla. (March 4, 2017) – The ETSU baseball team outscored Florida A&M 5-1 after the sixth inning as the Bucs powered past the Rattlers 10-8 on Saturday afternoon in Tallahassee, Fla. to end the Rattler’s six-game win streak.

After being outscored by four runs in the second half in the series opener, the ETSU baseball team rebounded in game two on Saturday as the Bucs outscored the Rattlers 5-1 after the sixth inning. ETSU plated one run in the seventh and a pair in the eighth and ninth innings to win the game 10-8.

Leading the offensive charge for the Bucs was red-shirt junior Chris Cook (Kingsport, Tenn.). Cook went 4-for-6 with three RBIs with all three RBIs coming with two outs.

The one through four hitters for ETSU combined for 10 hits with four RBIs and five runs scored. Blake Rowlett (Clarksville, Tenn.), Hagen Owenby (Knoxville, Tenn.), and Aaron Maher (Brentwood, Tenn.) each recorded a pair of hits on Saturday at the top of the order. Rowlett connected with the only extra-base hit of the game for either team.

Cullen Smith (Lebanon, Tenn.) joined in on the hit parade as he smacked two singles including scoring a pair of RBIs.

The Buccaneer offense stole three bases on the day with Hunter Parker (Chattanooga, Tenn.), Smith, and Cook each swiping one base.

Defensively, the Bucs turned an impressive four double plays Saturday. Prior to the FAMU series, ETSU was ranked 20th in the country and first in the Southern Conference in double plays turned.

Florida A&M scored seven of its eight runs before the seventh inning including a four-run sixth frame. However, the ETSU bullpen was strong as Drew Korzybski (Knoxville, Tenn.) and Peyton Taylor (Kingsport, Tenn.) combined for 3.1 innings while scattering three hits and one run scored (none earned).

The rubber match of the series is set for a 1 p.m. first pitch in Tallahassee on Sunday. ETSU is hoping to come out with the series win, which would be its fourth straight series win.

The Rattlers struck first as they plated a run in the second off a sacrifice fly from Ty Russ. They extended that lead as Aubrey McCarty and Willis McDaniel each knocked a RBI single in the third inning to take the 3-0 lead.

The ETSU offense quickly caught fire in the fourth as the Bucs scored four runs off three hits and two FAMU errors.

With the bases loaded, Smith hit into a groundout to score Owenby from third. Seth Cunningham (Bristol, Va.) laid down a safety squeeze back to the pitcher, which scored Maher to make the game 3-2. ETSU tied the game up at 3-3 as the Rattlers committed an error in the inning. ETSU scored the go-ahead run as Cook knocked a single to right center to score Caleb Longley (Cleveland, Tenn.) from second base to make the game 4-3.

The Bucs padded their lead by a pair as Rowlett delivered an RBI single through the right side to pull ahead 5-3.

Florida A&M regained its second lead of the game as the Rattlers took advantage of Buccaneer miscues to score three runs to take the 7-5 advantage.

Maher led the inning off with his second hit of the game as he singled to left. After advancing to second, Smith smacked a single into center field to pull the game to 7-6.

For the second time of the game, ETSU took the lead as Cook scored on a wild pitch. Owenby followed with a walk and on the play, the ball got past the Rattlers catcher, which scored Rowlett from third.

The Rattlers did not surrender as Brian Davis knocked a RBI single to knot the game again at 8-8.

The Rattlers gifted the Bucs the game-winning runs in the ninth as the Bucs went on to win 10-8.

Daniel Rodriguez came on to pitch for FAMU, He forced a groundout and a strikeout to start the inning. However, Longley reached on a FAMU error to give the Bucs a glimpse of hope. Sam Stewart (Kingsport, Tenn.) came on to pinch run for Longley, and Stewart advanced to third after Rodriguez made a failed pickoff move. Parker walked and stole second to put two runners in scoring position. Cook came in clutch as he knocked the game-winning two-RBI single to left.

Florida A&M went down in order in the ninth as the Rattlers couldn’t match the Bucs’ two-run inning as they fell 10-8 to end their six-game winning streak.