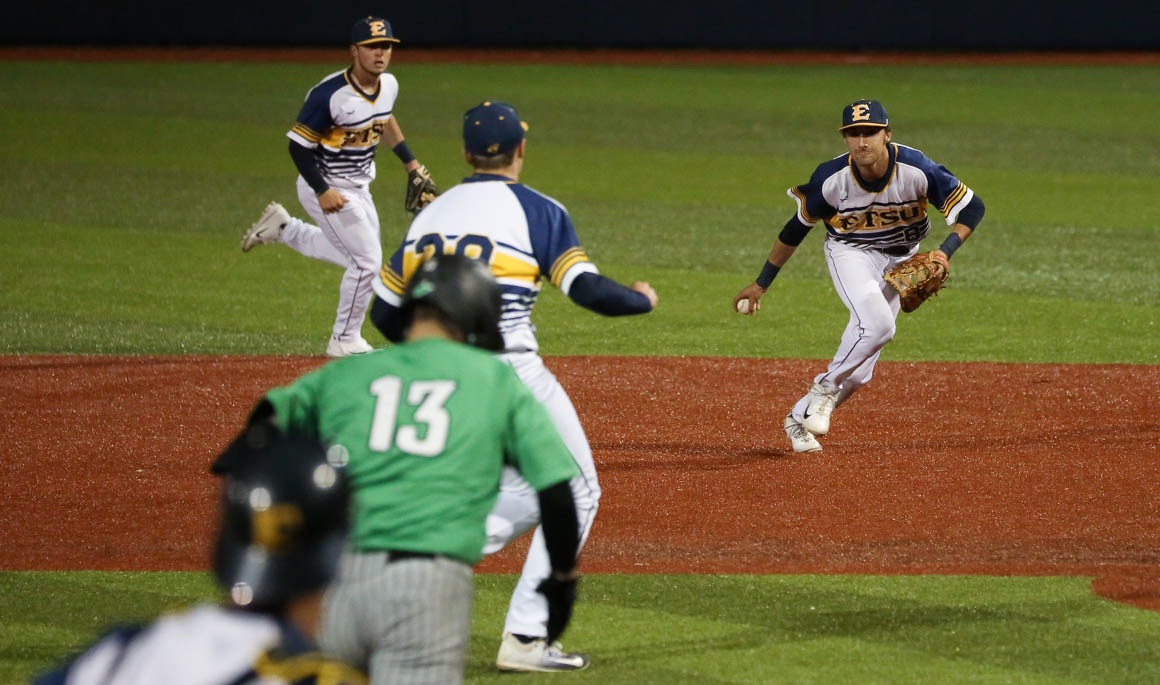 JOHNSON CITY, Tenn. (March 8, 2017) – The Bucs couldn’t get the clutch hit on Wednesday against Marshall as ETSU baseball fell 9-3 and were held hitless in eight chances with runners in scoring position at Thomas Stadium.

ETSU had eight opportunities with runners in scoring position, but the Bucs couldn’t get timely hits as they were held hitless in those chances. The ETSU offense was also limited to just two hits with runners on base in 15 chances.

The pitching staff nearly matched a season high as the seven ETSU pitchers combined for 15 strikeouts with senior Griffin Krieg (Nashville, Tenn.) leading the way with six. Just behind him was Dillon Cate’s (Sevierville, Tenn.) three strikeouts in his one inning of work. Daniel Shaw (Memphis, Tenn.) worked 1.1 innings as he totaled a pair of strikeouts without a run to score.

Also having a successful day on the bump for the Bucs was Logan Gentry (Kingsport, Tenn.), Russell Koesters (Kingsport, Tenn.), and Matt Turner (Knoxville, Tenn.). Gentry worked the fourth inning where he didn’t allow a run or hit while totaling one strikeout. Koesters had his best outing of the year as he worked one inning without a run or hit to occur while striking out one. Red-shirt freshman Turner appeared in his third career game, and he faced the minimum in the ninth while striking out one Thundering Herd batter.

The ETSU offense connected with nine hits including six of the nine Buccaneer starters recording at least one hit.

The Bucs had a trio of players with multi-hit performances - Christian Bailey (Kingsport, Tenn.), Cullen Smith (Lebanon, Tenn.), and Hunter Parker (Chattanooga, Tenn.). Bailey spanked the only extra-base hit for the Blue and Gold as he crushed a double to center field. Bailey finished the day with an RBI and a run scored. Freshman Smith posted another two-hit night as he has seven multi-hit games this year including three straight games with two or more hits. Parker continued his hit streak to five straight games as he slapped a pair of singles on Wednesday. He has only been held hit-less in one game this year in 12 games starts.

The three through five hitters for the Bucs - Hagen Owenby (Knoxville, Tenn.), Aaron Maher (Brentwood, Tenn), and Bailey – accounted for all three runs for ETSU as the trio touched home once. Seth Cunningham (Bristol, Va.) recorded the second RBI for the Bucs as he scored Bailey on a fielder’s choice in the ninth inning.

Marshall starter Will Ray earned his first win of the year, and Buccaneer starter Krieg was pinned with his first loss on the season. ETSU drops to 7-5, and the Thundering Herd advance to 6-5.

The next game for ETSU baseball will be at Thomas Stadium, as the Bucs welcome Gardner-Webb for a three-game series. The Bucs and Runnin’ Bulldogs series is scheduled to begin Friday, March 10 at 6:30 p.m.