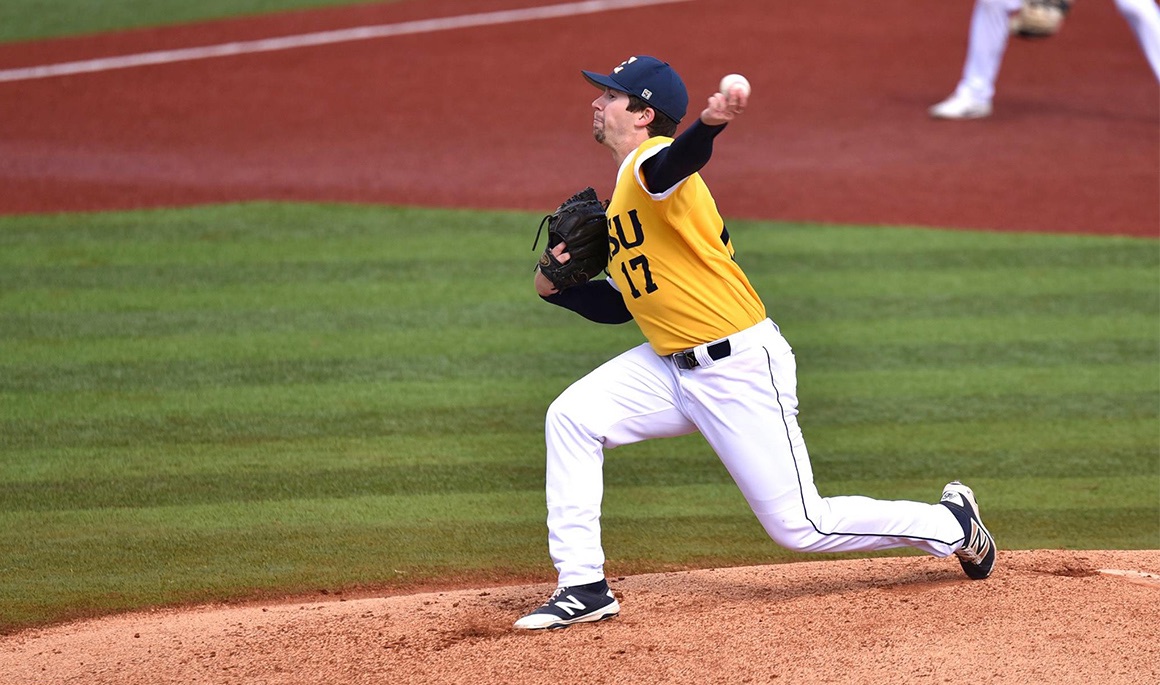 JOHNSON CITY, Tenn. (March 10, 2017) – The ETSU pitching staff shined as the Bucs swept the double header against Gardner-Webb on Friday as the Bucs won game one 19-4 and game two 5-4 at Thomas Stadium.

The wins give ETSU its fourth series win of the year, and the Bucs look to seal their first three-game series sweep of the season Saturday at 1 p.m. inside Thomas Stadium.

The Buccaneer pitching staff used five pitchers for both games as they allowed two earned runs in the 18 innings on Friday. The staff also combined for 23 strikeouts and four walks in the double-header affair.

Game two starting pitcher - Jamin McCann (Kingsport, Tenn.) – was phenomenal as he reached a career high in innings pitched at 8.2. He hurled 134 total pitches including 82 for strikes (61.2 strike percentage). He scattered seven hits with one earned run while striking out nine batters – which is one short of tying his career-high that he set at the Southern Conference Tournament last year against The Citadel.

McCann earned the victory and moves to 2-0 on the year, and Peyton Taylor (Kingsport, Tenn.) slammed the door in the ninth by striking out the last batter to seal the 5-4 victory in game two.

Game one starter – Ryan Simpler (Lewes, Del.) – was also lights out as he tossed six innings and set a career-high with nine strikeouts. He walked one batter and let one earned run score to receive his third win of the year to lead the Bucs. Dillon Cate (Sevierville, Tenn.) and Connor Bartow (Jonesborough, Tenn.) finished the first game as both pitchers did not allow a hit or run with each striking out a pair of Runnin’ Bulldogs.

In the 19-4 victory, the ETSU bats caught fire as the Bucs rallied for 18 hits including eight extra-base hits.

Caleb Longley (Cleveland, Tenn.) crushed two home runs off the scoreboard in left field, and he now has five homers on the year to lead the team. Chris Cook (Kingsport, Tenn.) contributed to the slugfest as he knocked his third home run of the year and his fourth double of the season.

Aaron Maher (Brentwood, Tenn.) had the lone triple on Friday as he hustled out a long hit to right-center. Christian Bailey (Kingsport, Tenn.), Cullen Smith (Lebanon, Tenn.), and Jammer Strickland (Knoxville, Tenn.) all slapped a double with Bailey extending his team-best, sixth two-bagger of the year.

The six through nine batters for the Blue and Gold all had multi-hit performances with Blake Rowlett (Clarksville, Tenn.) connecting with three hits in the game. These four hitters for the Bucs all scored at least twice with Strickland leading the group with three runs scored. Longley and Smith also combined for nine RBIs with Longley leading the surge with six.

Six ETSU batters recorded multi-hit games with Cook and Bailey joining Rowlett with a trio of hits in game one. Cook and Bailey both plated three RBIs as Cook touched home four times in the 19-4 victory. Hagen Owenby (Knoxville, Tenn.) walked once and knocked a single as he plated two RBIs while touching home twice as well.

In the second game, the ETSU offense cooled off as the Bucs tallied nine hits. The Blue and Gold didn’t get on the board until a game-tying fly out in the sixth inning from Smith.

Maher walked to lead off the sixth, and he advanced to third a throwing error by the GWU third baseman. Smith connected on a fly out to left field, which scored Maher easily from third to tie the game at 1-1.

The Buccaneer bats provided just enough offense in the seventh inning as they plated four runs highlighted by Maher’s first homer of the year.

Owenby turned on an inside pitch and placed the ball into left field, which scored Longley from second base to give ETSU its first lead of the day. On the second pitch, Maher crushed a three run homer to right field, which padded the ETSU lead to 5-1.

However, Gardner-Webb did not surrender as the Runnin’ Bulldogs scored three runs in the ninth inning off a pair of hits. Jacob Whitley took advantage of an ETSU error earlier in the inning that would have ended the game. He smacked a three run homer to right to pull the ETSU lead to one run. Taylor came in to pitch for the Bucs to get the final out, and he struck out the final batter to seal the double-header sweep over Gardner-Webb.