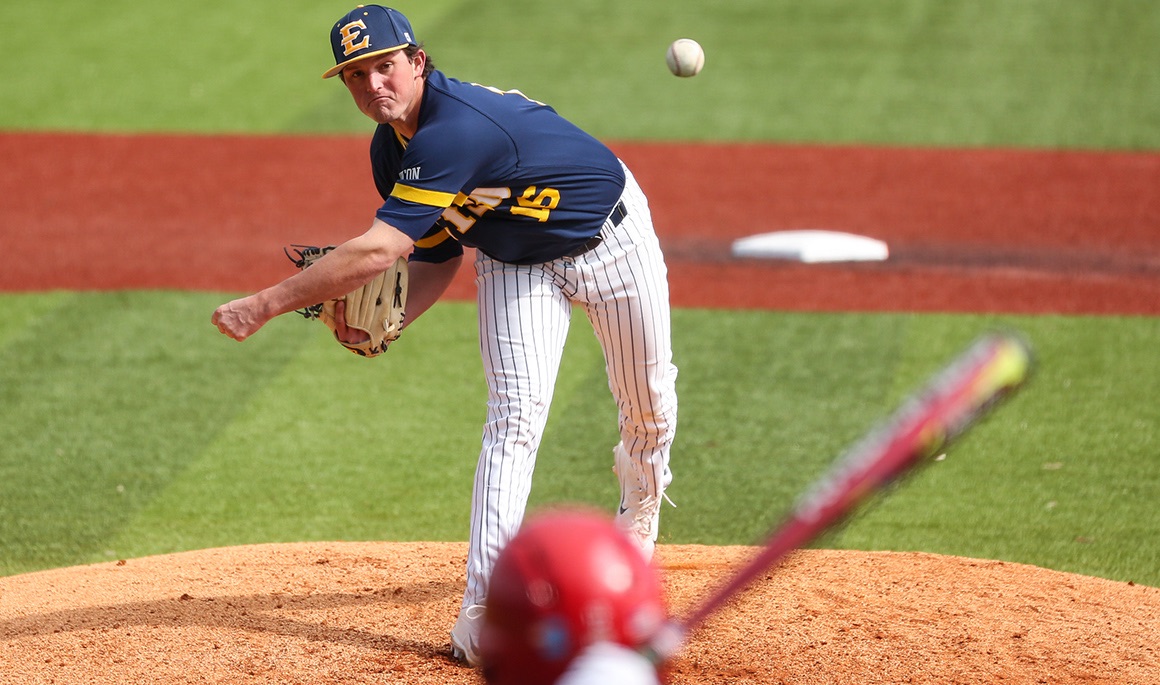 JOHNSON CITY, Tenn. (March 11, 2017) – Despite holding Gardner-Webb scoreless for seven innings on Saturday, the ETSU baseball team slipped 5-1 in game three of the series as the Bucs were held to a season-low five hits inside Thomas Stadium.

The Buccaneer bullpen was nearly perfect as the four relief pitchers combined for four innings without a run to score. They struck out five batters and allowed just a pair of hits to fall.

The ETSU pitching staff, however, did surrender seven total walks, and the Runnin’ Bulldogs took advantage of the free bases as they scored five runs in the second and third innings.

Griffin Krieg (Nashville, Tenn.) was the first reliever for the Bucs as he tossed one inning of work. He got into some trouble as he allowed a pair of walks with two outs in the sixth, but the senior struck out the final batter to end the threat.

Logan Gentry (Kingsport, Tenn.) was the second reliever for the Blue and Gold, and he faced two batters and got both Runnin’ Bulldogs out on ten pitches. Daniel Shaw (Memphis, Tenn.) followed with 0.2 innings with a strikeout and one hit allowed. With the 0.2 innings of work for both pitchers, Gentry lowered his season ERA to 1.59, and Shaw dropped his mark to 2.08 as both have appeared in five games this year.

Peyton Taylor (Kingsport, Tenn.) was the final pitcher for the Bucs as he hurled 1.2 frames. He struck out a trio of batters while scattering a lone hit between the eighth and ninth innings.

ETSU’s offense was limited to a season-low five hits as the Gardner-Webb starting pitcher Bradley Hallman tossed a complete game. He allowed one run that was earned and struck out four Buccaneers on 106 pitches in the series finale.

Hallman (2-2) earned his second win of the year, and ETSU starter Blake Smith (Ninety Six, S.C.) was pinned with his second loss of the season as he drops to 0-2.

The Bucs move to 9-6 on the season as the Runnin’ Bulldogs leave Johnson City with a 6-11 record.

Junior Christian Bailey (Kingsport, Tenn.) provided most of the ETSU offense in game three as he contributed two of the team’s five hits on Saturday. He knocked the only extra-base hit for the Blue and Gold as he roped a triple to lead off the seventh inning. He eventually scored the lone Buccaneer run as Cullen Smith (Lebanon, Tenn.) plated his teammate on an RBI groundout.

Hagen Owenby (Knoxville, Tenn.) and Aaron Maher (Brentwood, Tenn.) tried to light a spark in the Buccaneer offense in the ninth inning as both hit back-to-back singles with one out in the frame. However, Hallman forced the lone double play of the afternoon to end the rally and seal the 5-1 victory.

For Gardner-Webb, Corey Howard and Collin Thacker combined for half of the eight GWU hits. Thacker knocked two extra-base hits with a double and his first home run of the year.

The Bucs next game will be against Radford at home on Tuesday, March 14 at 6:30, and on Wednesday, March 15, ETSU will travel down to Asheville, N.C. to square off against UNC-Asheville with a 6 p.m. first pitch.