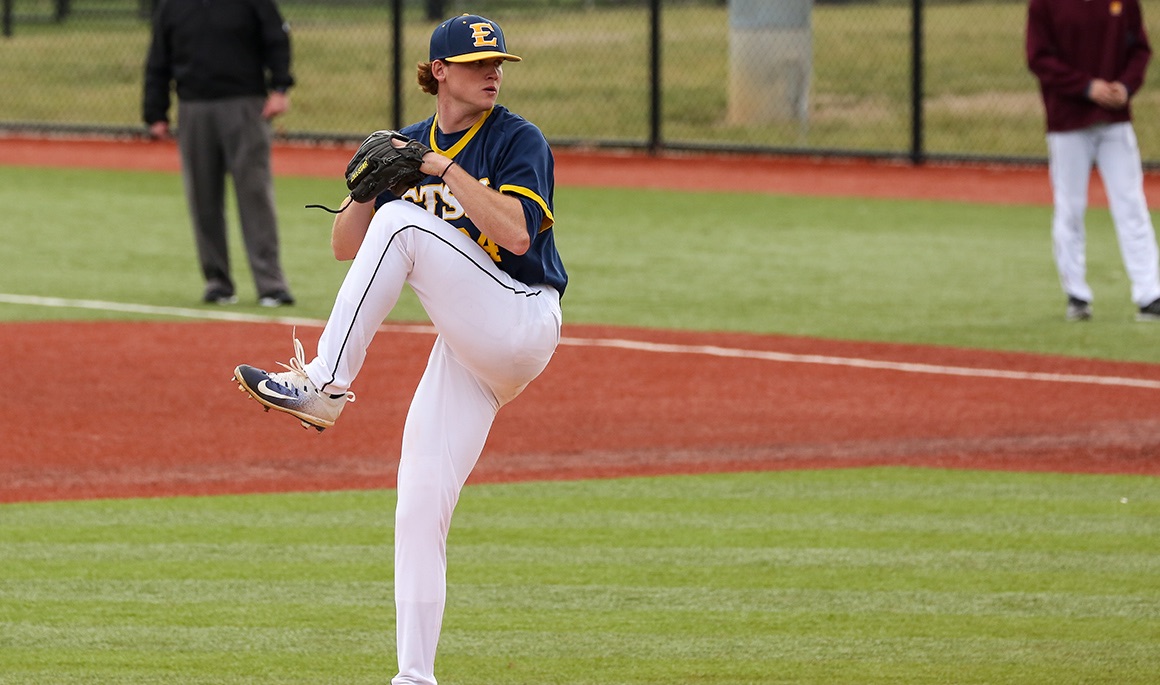 ETSU wins 2-1 duel in game one; Smith tosses 2-hit shutout with 14 strikeouts in the rubber match

After dropping game one of the series on Saturday, the Buccaneers bounced back with a doubleheader sweep over the Redhawks at McKie Field. Junior Drew Korzybski (Knoxville, Tenn.) tossed 6.1 scoreless innings of four-hit ball, while Hunter Parker’s (Chattanooga, Tenn.) fielder’s choice plated the game-winning run as ETSU evened the series with a 2-1 victory in game one of the twinbill.

With the series evened, senior Blake Smith (Ninety Six, S.C.) stuffed the Redhawks’ lineup as he struck out a career-high 14 batters en route to tossing a two-hit shutout as the Bucs cruised to a 14-0 series-clinching victory in the nightcap.

Smith – who missed tying the ETSU single-game strikeout record by one – became the first Buccaneer hurler to register a complete game shutout since All-American Kerry Doane accomplished that feat back on May 10, 2013 when he delivered the Blue and Gold a 1-0 victory at No. 21 Mercer. Smith’s previous single-game high for strikeouts was seven, which was set last season in a relief appearance (2.2 innings) at UNC Asheville, while his 14 punch outs are the most by a Buccaneer pitcher since Reid Casey fanned a school-record 15 against Xavier back on Feb. 23, 2001. This year’s NCAA Division I single-game strikeout record is 17, which has been done twice, while Smith’s 14 strikeouts is the third highest total by a Southern Conference pitcher this season.

Smith struck out the side in the first and seventh innings, while he retired the final 11 Miami hitters after surrendering a one-out single in the sixth inning. Six of his final 11 outs came via the strikeout as he ended the game with back-to-back punch outs to conclude the 14-run victory. In total, Smith totaled 111 pitches (73 strikes), while also inducing four groundouts and 10 fly outs.

The Buccaneer right-hander earned his first win of the season (1-2) following his spectacular start, while his ERA went from a team-leading 3.63 to 2.59. Smith also doubled up his strikeout total on the season as he entered the game with 12 and saw that number rise to 26.

The Bucs have now won four of their five weekend series to start the season and improved to 11-7, while the Blue and Gold now gear up for SoCon play as ETSU heads to Macon, Ga. next weekend to face reigning regular season champion Mercer.

In the first game of the doubleheader, ETSU plated a run in the first and added one more in the fifth to secure a 2-1 victory behind key outings from Korzybski and Peyton Taylor (Kingsport, Tenn.).

Despite being out-hit, 7-6, the Bucs did just enough to manufacture the two runs.

Chris Cook (Kingsport, Tenn.) – who led off the game with a walk – stole second, went to third on a balk and later scored on a passed ball. After being held scoreless for the next three innings, the Blue and Gold capitalized on Caleb Longley’s (Cleveland, Tenn.) leadoff double in the top of the fifth. Longley advanced to third on Seth Cunningham’s (Bristol, Va.) sacrifice bunt and sprinted home on Parker’s fielder’s choice RBI ground out to put ETSU ahead, 2-0.

After Korzybski came out of the pen in relief of Jamin McCann (Kingsport, Tenn.) with two outs in the first, the Buccaneer righty did a sensational job in an extended relief outing. Korzybski held the Redhawks scoreless on four hits over the next six-plus innings to keep ETSU’s two-run lead intact.

Miami scratched across its only run in the bottom of the eighth when Carlos Texidor reached on a leadoff error by second baseman Blake Rowlett (Clarksville, Tenn.) and later scored on Ross Haffey’s two-out RBI single through the left side, making it a 2-1 score.

With Taylor limiting the damage to one run in the eighth, the Buccaneer senior retired three of the four batters he faced in the bottom of the ninth to even the series, 1-1.

Korzybski picked up the win (2-2) as he tossed 6.1 scoreless innings and scattered four hits, while Taylor notched his third save of the year after securing the final six outs.

Zach Spears suffered the loss (1-4) as he was charged with the two runs (one earned) on four hits with seven strikeouts and two walks in five innings.

Hagen Owenby (Knoxville, Tenn.) and Longley both finished with two-hit performance for the Bucs.

After a nip-and-tuck game in the opener, the Buccaneer offense supported Smith with plenty of runs as ETSU cruised to a 14-0 victory.

As Smith was mowing down Redhawk hitters, the ETSU sluggers were feasting on Miami’s pitching as nine Buccaneer batters accounted for the 18 hits. Aaron Maher (Brentwood, Tenn.) and Christian Bailey (Kingsport, Tenn.) led the charge as they both finished with three hits, while Hagen Owenby went 2-for-4 with a double, home run, two walks, two runs and three RBI.

The Bucs gave Smith all the offense he needed with a four-run third inning, which was highlighted by Owenby’s two-run home run to left for his third homer of the season.

Following the four-run third, the Blue and Gold broke the game open by plating six runs on five hits in the top of the fourth, making it a 10-0 contest. Again, Owenby continued swinging a hot bat as he drove in the first run of the frame when his double plated Parker – who led off the inning with an infield single – while Maher drove in two with a single through the right side. Rowlett connected on a two-run scoring double to left-center, and he later scored on a two-out passed ball to advance the Buccaneer lead.

ETSU added a run in the fifth, two in the sixth and capped off the scoring in the eighth. Chris Cook touched the dish on a balk in the sixth, while Rowlett and Longley scored unearned runs an inning later. Freshman Cade Gilbert (Ringgold, Ga.) came through with his first collegiate hit and RBI in the eighth as his two-out infield single plated Cunningham.

As the Bucs were busy tying their season high for hits, Smith only allowed four base runners – two singles, a walk and a hit batter – while he only allowed one Redhawk to reach second. Adam Yacek led off the bottom of the second with an infield single, and he moved to second on a sac bunt. However, he was left stranded as Smith struck out Ryan McLelland swinging and induced Steve Sada into an inning-ending ground out to short.

Miami also put a runner on base in the third when Brooks Urich worked a two-out walk, and he later singled up the middle in the sixth to snap a stretch of eight consecutive hitters retired.

Brad Schwartz was dealt the loss (1-2) as he issued six runs (five earned) on eight hits in 3.1 innings. Five Redhawk relievers accounted for eight runs on 10 hits with five walks and seven strikeouts over the final 5.2 innings.

Miami dipped to 4-13 after the doubleheader setbacks.