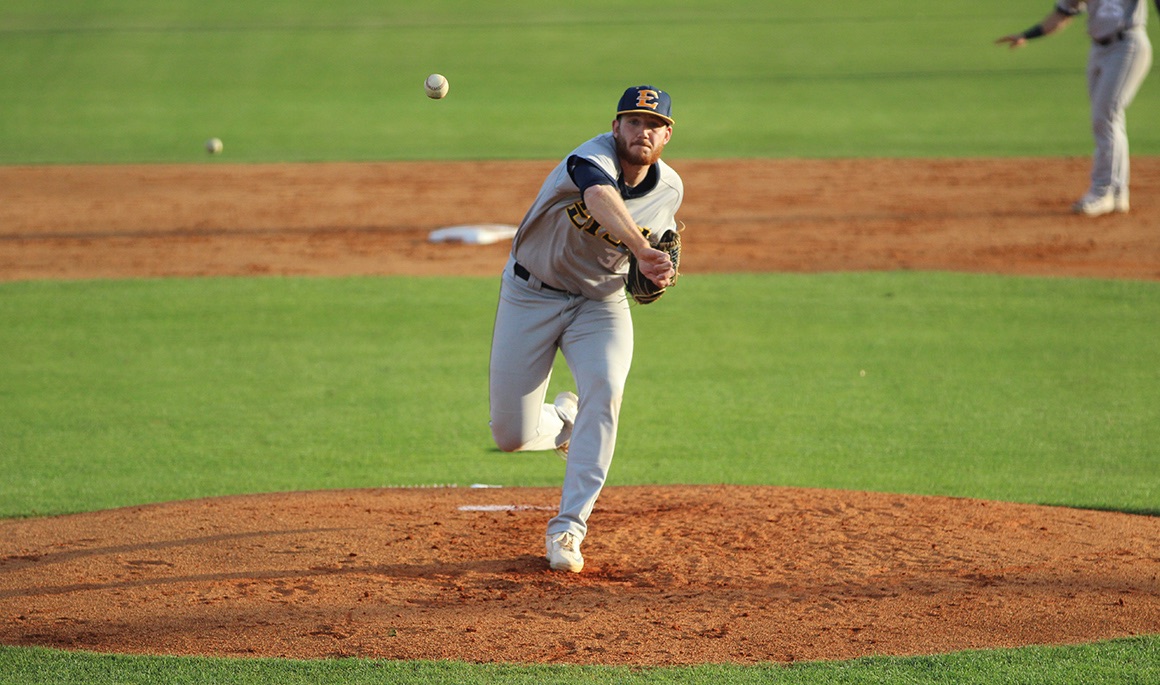 MACON, Ga. (March 24, 2017) – The ETSU baseball team faltered late in the Southern Conference opener to Mercer as the Bears connected with a pair of home runs in the eighth inning to give Mercer the 5-2 win in Macon, Ga. on Friday.

The Bucs battled back-and-forth with Mercer in the SoCon series opener in Macon as there were two ties and three lead changes on Friday at OrthoGeorgia Park.

Mercer jumped out to a 1-0 lead in the third inning, and the Bucs retaliated with their first run of the game in the fifth as Chris Cook (Kingsport, Tenn.) hit a seeing-eye single to first, which scored Caleb Longley (Cleveland, Tenn.) from third base.

However, the Bears came back later in that inning as they regained the lead at 2-1.

ETSU was held scoreless for the next two innings, but Aaron Maher (Brentwood, Tenn.) scored the tying run as he scored on an infield single from second base. The run in the top of the eighth made the game 2-2.

The Bears took advantage of a pitching change in the eighth as they knocked two home runs to open the game up to a 5-3 advantage. ETSU couldn’t respond in the final frame as the last three batters went down in order.

Ryan Simpler (Lewes, Del.) hurled a quality outing as the junior tossed seven strong innings – which matched a career-high. He struck out eight batters and only walked one while allowing one earned run in the series opener.

Offensively, the Bucs pounded out eight hits with all being singles. Three Buccaneers contributed a pair of hits – Maher, Cook and Hunter Parker (Chattanooga, Tenn.). Cook tallied one of the two RBIs in the game where Maher scored the second game-tying run of the series opener. Smith recorded the second RBI of the night for ETSU as he connected with an infield single in the eighth.

Christian Bailey (Kingsport, Tenn.) was the last Buccaneer to tally a hit as he knocked his 31st of the season – which is a team-best.

Despite the quality outing, Simpler was pinned with his third loss of the year and goes to 3-3 on the season. Mercer reliever Robert Broom earned his fourth win as he moves to 4-1.

The second game of the conference opening series for the Bucs continues tomorrow at 2 p.m. at OrthoGeorgia Park. Drew Korzbyski (Knoxville, Tenn.) is scheduled to take the hill for the Bucs in game two against the Bears.