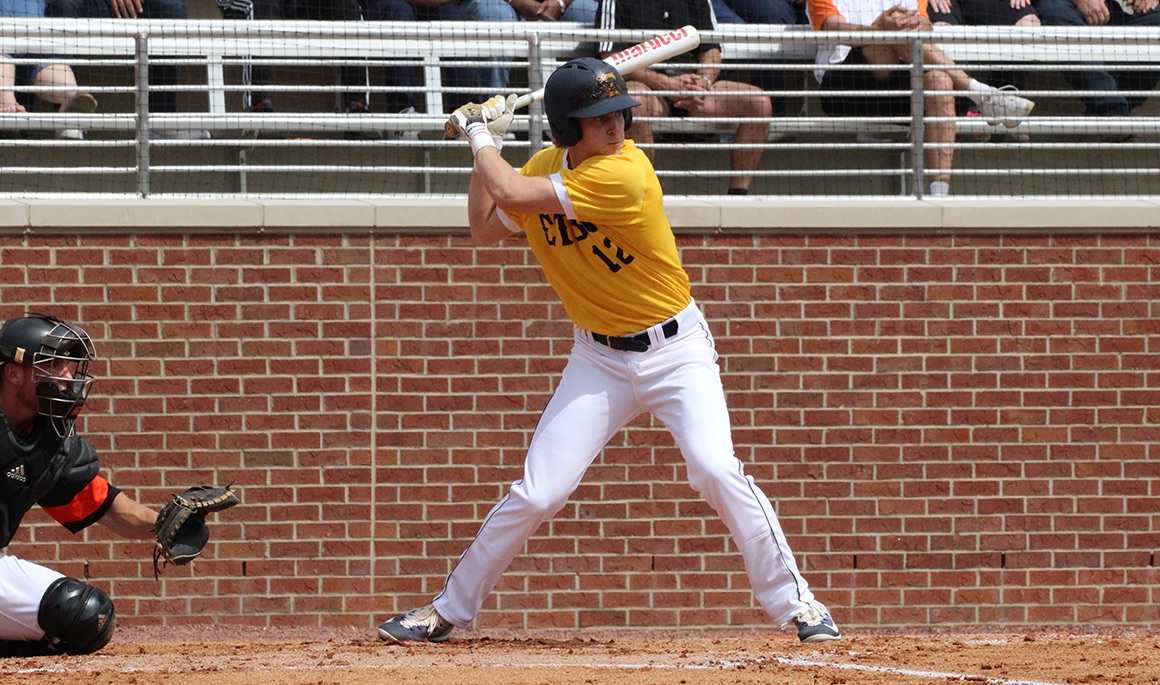 Seth Cunningham (pictured) connected with two hits while stealing a pair of bases and scoring once on Saturday.
ETSU scores six unanswered but falls 10-6 to Mercer
ETSU at Mercer | March 25, 2017
Related Links

MACON, Ga. (March 25, 2017) – Despite scoring six unanswered runs between the third to seventh innings, the ETSU baseball team fell 10-6 to Mercer on Saturday in Macon, Ga. as the Bears plated eight runs in the first two innings and two in the eighth frame to win game two of the series at OrthoGeorgia Park.

However, ETSU did not roll over as the Blue and Gold scratched and clawed its way back into the game after the second inning. The Bucs scored six unanswered runs for the next five innings. The six runs pulled the game within a pair, but that was the closest the Bucs could come as Mercer padded its lead by adding two more runs in the seventh inning. The Bears held onto that 10-6 lead as they won game two of the series on Saturday.

ETSU came close to extending its three-run seventh inning, but the Mercer first baseman snagged a line drive off the bat of Blake Rowlett (Clarksville, Tenn.) to end the inning and minimized the ETSU damage.

Offensively, the Bucs pounded out 12 hits including three going for extra bases. Junior catcher Hagen Owenby (Knoxville, Tenn.) had a solid outing as he recorded three singles and scored once. Hunter Parker (Chattanooga, Tenn.) came up to bat in three clutch situations, which resulted in a pair of RBIs and a left-center field double. Also contributing a pair of RBIs was junior Caleb Longley (Cleveland, Tenn.) as he snuck a single through the left side to start the three-run rally in the seventh frame.

As a team, eight of the nine starters totaled a hit in game two of the series. The two through five batters for the Blue and Gold scored at least once with Maher touching home twice to lead the team. Also, the four through seven hitters combined for all five RBIs for the Buccaneers.

The Bucs sent out eight different pitchers on Saturday as junior college transfer Daniel Shaw (Memphis, Tenn.) posted the longest outing with 2.1 innings of work. The Memphis native struck out a team-best three batters while not allowing a run to score. Prior to Shaw, Victor Gonzalez (Jupiter, Fla.) tossed a pair of scoreless frames while allowing just one hit. Connor Bartow (Jonesborough, Tenn.) finished the game for the Bucs as he worked a scoreless ninth inning while fanning one Mercer batter.

In his second start of his ETSU career, Drew Korzybski (Knoxville, Tenn.) was pinned with the loss as he drops to 2-3 on the year. Mercer starter Austin Cox received the win after hurling five innings of three run ball.