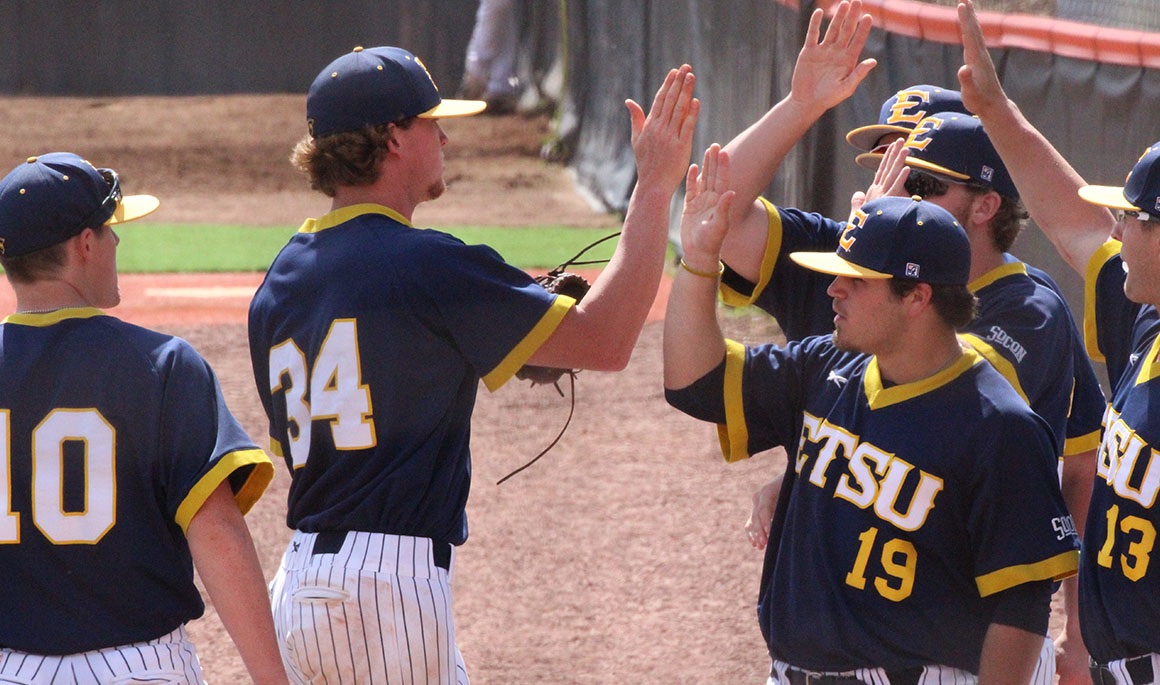 JOHNSON CITY, Tenn. (March 30, 2017) – After concluding its season-long road trip, the ETSU baseball team will begin its longest home stretch of the season as the Bucs host 12 straight games starting this weekend with Southern Conference rival UNCG on Friday, March 31 at 6:30 p.m.

Coming into the series as one of the best hitting teams in the country, the Bucs prepare for a three-game set with Southern Conference rival UNCG. The Blue and Gold are hitting at a .323 clip, which ranks the second-best in the SoCon. Leading the Bucs are six players hitting above .300. At the top of the Buccaneer squad is Hunter Parker (Chattanooga, Tenn.). The junior is hitting at a .413 mark, which ranks 26th in the country, and right behind him is fellow junior Christian Bailey (Kingsport, Tenn.) who is 65th in the country with a .394 batting average.

Bailey leads the team in extra-base hits with ten including a team-leading eight doubles. Cullen Smith (Lebanon, Tenn.) leads the squad with 22 RBIs and is second in doubles with six. Junior Aaron Maher (Brentwood, Tenn.) is third on the Buccaneer team with a .374 batting average in 22 starts in right field. The 2016 MLB draftee has a .457 on-base percentage and is second on the team with 34 total hits.

In the 12 home games this year, the Bucs have combined for 13 home runs. Caleb Longley (Cleveland, Tenn.), Chris Cook (Kingsport, Tenn.), and Blake Rowlett (Clarksville, Tenn.) have combined for ten of those with Longley leading the way with five home runs. While inside Thomas Stadium this year, the Bucs have out-scored opponents 104-77 and out-hit visiting team 145-113 en route to a 8-4 record in Johnson City.

The ETSU pitching staff this season has been great as the staff totes a 4.68 ERA and a .274 opposing batting average. The Bucs have also struck out 182 batters in 22 games, which amounts to 8.27 strikeouts per game.

Leading the team in strikeouts this year is Friday’s starter Ryan Simpler (Lewes, Del.). The junior has 41 strikeouts and eight walks this season in 35.2 innings of work. Just behind him is senior Sunday starter Blake Smith (Ninety Six, S.C.). Blake Smith has started six games and holds a 2-2 record, and he has limited opponents to a .255 batting average in 39.1 frames of work.

In the bullpen, the Bucs have seen some good outings from several players this season. Leading the surge is Connor Bartow (Jonesborough, Tenn.). The senior captain has tossed in four games this season and sports a perfect 0.00 ERA. He has struck out six batters and hasn’t allowed a walk this year. Dillon Cate (Sevierville, Tenn.) has been a reliable bullpen pitcher for the Bucs as he has tossed in nine games this year and has a 2.00 ERA. Joining that list is Daniel Shaw (Memphis, Tenn.) and Logan Gentry (Kingsport, Tenn.). The duo has combined for 14 appearances this year in 14.2 innings of work and striking out 16 while walking four batters.

Like ETSU, UNCG has one of the potent offenses this season as the Spartans lead the country in batting average (.338), triples (21) and triples per game (0.84). UNCG is also ninth in the nation in total hits with 290 and 17th in scoring with 8.1 runs per game.

The Spartans come to Johnson City with a 16-9 overall record and a 2-1 SoCon mark. The Spartans have played just four games on the road this season and boast a 1-3 record in road contests.

Leading the UNCG offense is Caleb Webster who has played in 19 games and started in 17 this year. Webster has a team-leading .455 batting average, seven doubles, .488 on-base percentage and .621 slugging percentage. Joining him on the team hitting above .300 this season are five other teammates including a .411 batting average from Austin Embler. He is tied for the most home runs on the team with three and second on the squad with 23 RBIs. Andrew Moritz leads the team in triples as he has recorded six.

On the UNCG pitching staff, they have their Sunday starter Matt Frisbee who leads the starting rotation. Frisbee was named the SoCon player of the month for February as he tossed a combined 14 innings in the month. The highlight of his month was when he shut down then-No. 8 South Carolina in a 1-0 victory.

Andrew Wantz and Chad Sykes have been the best relievers for the Spartans. Wantz has appeared in the most games this year (12) and leads the team with 41 strikeouts. Sykes has the second-most appearances with 11 as he limits opponents to a .231 batting average in 13.2 innings pitched.