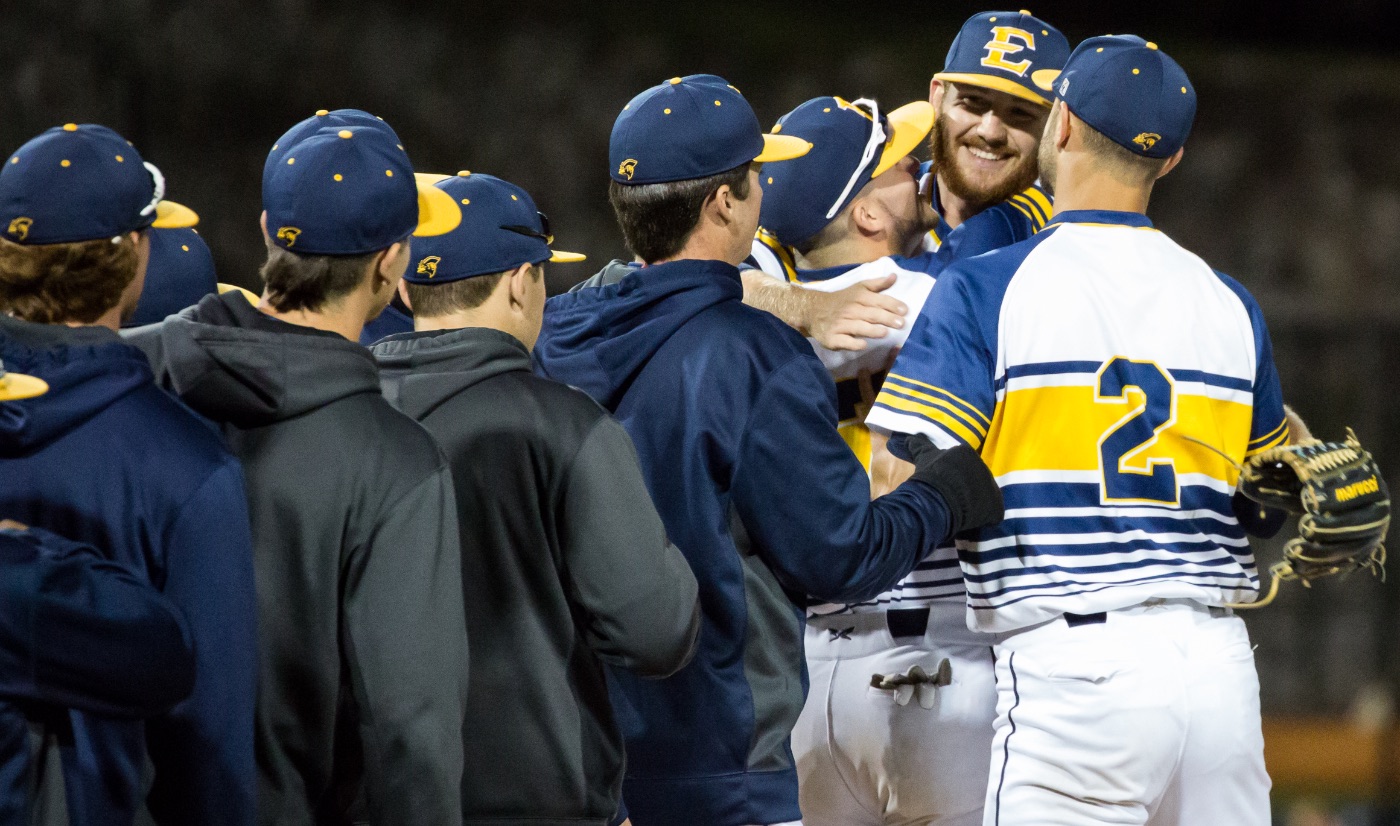 Simpler – who posted his first collegiate complete game shutout – limited UNCG to six hits, while striking out seven and walking one. Simpler tossed 108 pitches (76 strikes) en route to improving to 4-3 on the season.

The outing marked the first shutout at home since April 12, 2013 when Kerry Doane pitched ETSU to an 8-0 win over Lipscomb.

This was the first time in about two years that UNCG was shutout.

Despite allowing five Spartans to get on base to leadoff an inning, Simpler minimized the damage as he picked off two Spartans at first base while inducing a pair of double plays. He also limited the visitors hitless in nine chances with runners on base, and he did not allow a batter to reach third base or score in the series opener at Thomas Stadium.

To back up his dominating outing, the Bucs drilled 14 hits for their 15th double-digit hit performance of the year. Of those 14 hits, Caleb Longley (Cleveland, Tenn.) drilled three doubles on Friday including drawing a hit-by-pitch and walking once. The junior led the team as he brought home three teammates and even touched home once in the series opener. The Cleveland, Tenn. native also swiped a pair of bases, which doubled his career total.

Joining Longley with a three-hit performance was Christian Bailey (Kingsport, Tenn.). For the 12th time this season, Bailey finished with a multi-hit game by going 3-for-5 including a pair of RBIs and scoring once. Aaron Maher (Brentwood, Tenn.) dropped a pair of hits including his second home run of the season in the seventh inning. Blake Rowlett (Clarksville, Tenn.) and Hunter Parker (Chattanooga, Tenn.) rounded out the multi-hit games for the Blue and Gold as each Buccaneer knocked a pair of hits.

As a team, the Bucs struck out ten times. However, the Bucs worked deep into counts that allowed ETSU to draw ten walks – which ties a season high. One of the biggest differences in the game was holding UNCG hit-less with runners in scoring position whereas the Bucs knocked five hits with runners on second and/or third.

In the previous four three-game series where the Bucs won on Friday, the Bucs went on to win the series in three of those sets. ETSU picked up its fifth series-opening win on Friday as the Bucs routed the Spartans in Johnson City.

Behind Simpler’s commanding start, the Bucs hand UNCG its tenth loss of the season as the Spartans fall to 16-10 overall and 2-2 in conference play. With the fifth win on Friday, ETSU moves to 13-10 and 2-2 in the SoCon.

Game two of the series with UNCG is scheduled to begin at 2 p.m. at Thomas Stadium on April 1. Right-handed pitcher Drew Korzybski (Knoxville, Tenn.) will take the hill for the Bucs for his third start of the season.