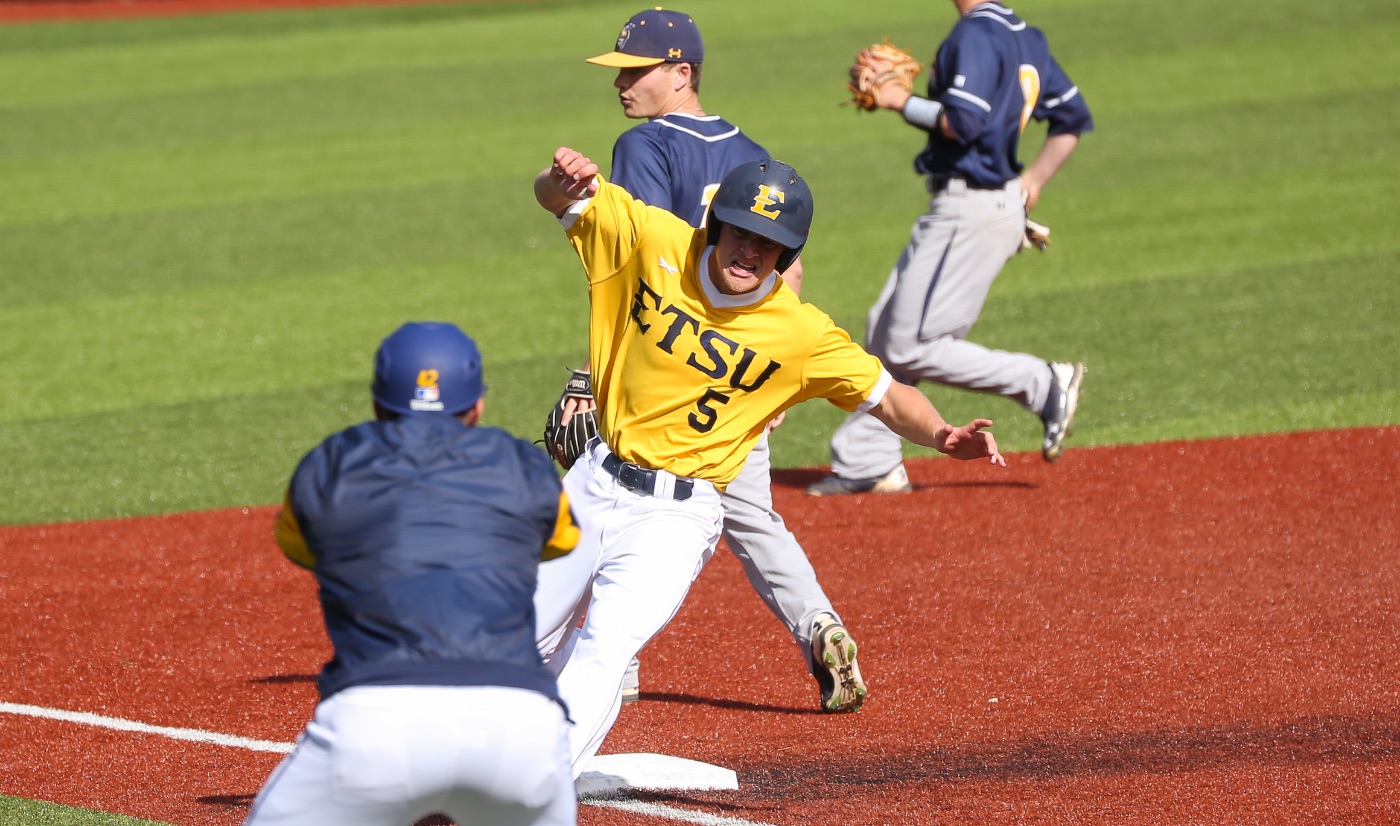 JOHNSON CITY, Tenn. (April 1, 2017) – Despite scoring five unanswered runs in the final two innings, the ETSU baseball team fell 9-7 on Saturday at Thomas Stadium as UNCG evened the series at 1-1.

Neither team could muster a run in the first two innings, but UNCG tallied a run in each the third and fourth innings to pull ahead 2-0. However, the Bucs came back with a vengeance in the bottom of the fourth as freshman Cullen Smith (Lebanon, Tenn.) roped a two-out, two RBI double down the right field line to knot the game at 2-2.

The lead quickly dissipated as the Spartans put up a crooked number in the sixth with five runs. Of the five runs that scored, only three were earned after the Bucs squandered two putouts in the frame. After taking a 7-2 lead, UNCG padded that lead to 9-2 in the seventh.

However, the Bucs started hitting reliever Andrew Wantz as they scored two runs in the eighth to pull within five. In a 9-4 hole, the Bucs plated three runs off Wantz to bring his game total to five runs - all of which were earned. The Spartans quickly pulled the string on Wantz and called for Chad Sykes to close the game. He forced the final two outs to earn his seventh save of the season and preserve the 9-7 win.

Up until the eighth inning, the ETSU offense could only muster four hits in game two of the series. However, the Bucs connected for five hits in the last two frames to pull the game within a pair.

Overall, the Bucs struck for seven runs off nine hits with Hunter Parker (Chattanooga, Tenn.) and Aaron Maher (Brentwood, Tenn.) leading the team with multi-hit performances. Parker connected with his second three-hit game of the season, and Maher dropped a pair of singles and also stole two bases on Saturday. The two Bucs also accounted for five of the seven ETSU runs as both Buccaneers touched home twice.

Joining the duo offensively was Smith who finished the outing going 1-for-3 with a team-best two RBIs and a run scored. Caleb Longley (Cleveland, Tenn.) joined in on the action as he knocked his sixth double of the season in the three-run ninth inning for the Bucs.

ETSU sent out six different pitchers on Saturday in the 9-7 loss. Every pitcher on the staff surrendered at least two hits except for Russell Koesters (Kingsport, Tenn.) who silenced the UNCG bats in the top half of the ninth inning. Connor Bartow (Jonesborough, Tenn.) continued his success on the hill as he worked a scoreless frame while striking out one. In his inning of work, he forced two batters to line out while striking out the final Spartan swinging.

UNCG struck for 17 hits including six extra-base hits. The 17 hits allowed is the second-most the Buccaneer staff has surrendered in a game this year. The Spartans capitalized with five hits in runners in scoring position, but UNCG still stranded 11 batters on the base paths.

Senior Griffin Krieg (Nashville, Tenn.) was pegged with the loss as he drops to 0-2 on the year. UNCG’s starting pitcher, Bryce Hensley, earned his fourth win of the season as he moves to 4-3.

The rubber series between ETSU and UNCG is scheduled to begin at 1 p.m. at Thomas Stadium on April 2. Senior right-handed pitcher Blake Smith (Ninety Six, S.C.) is set to toe the rubber as he faces the nation’s top-hitting team on Sunday.