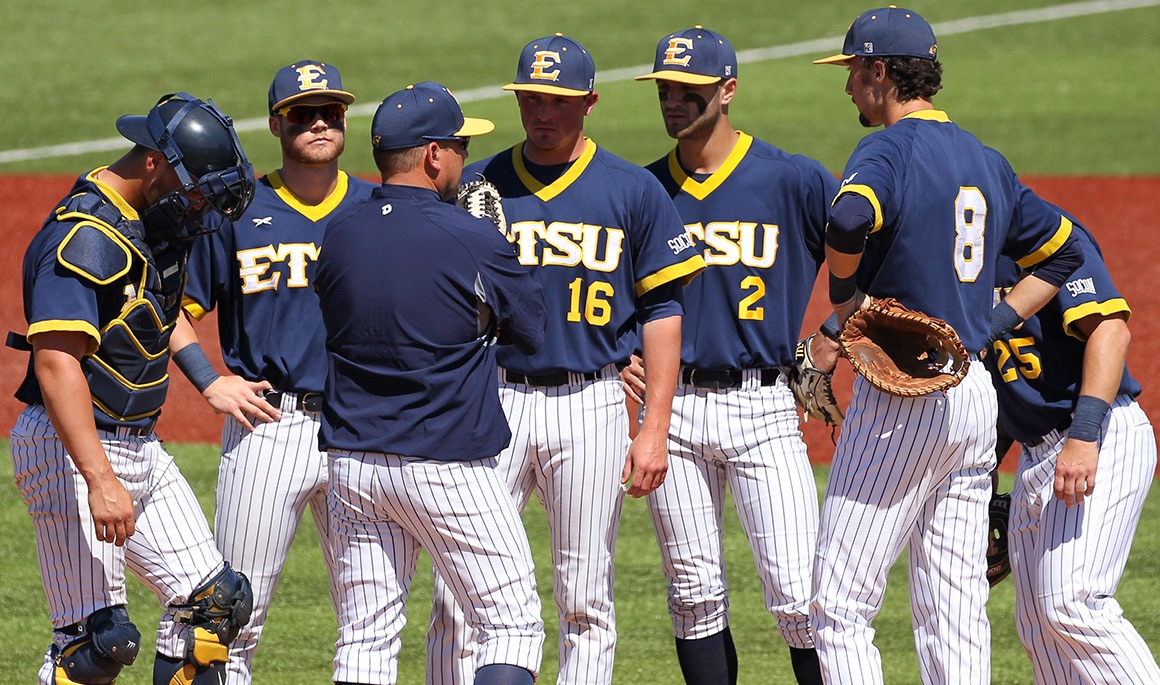 JOHNSON CITY, Tenn. (April 2, 2017) – The ETSU baseball team tried to rally past UNCG on Sunday at Thomas Stadium, but the Spartans scored runs in eight straight innings to overpower the Bucs in the series finale 12-3.

The UNCG starting pitcher – Matt Frisbee – was efficient on Sunday as he worked 7.2 innings while working 1-2-3 innings in five frames.

The Buccaneer offense put together a rally in the second with a walk and two singles as they scored their first run of the game off a Caleb Longley (Cleveland, Tenn.) single up the middle.

ETSU was held in-check the next four innings as Frisbee sat the Buccaneer lineup in order all four times. However, ETSU finally started to hit the right-hander in the seventh and eighth innings when the Bucs recorded a run off three hits and two walks between both frames.

ETSU ran Frisbee out of the game in the eighth inning as the Bucs worked the bases loaded after a double and two walks, but Chad Sykes fended ETSU off the board by forcing a ground out to get out of the jam.

The Bucs’ offense was able to score twice in the last three innings as Christian Bailey (Kingsport, Tenn.) roped an RBI double off the wall in right center, and Seth Cunningham (Bristol, Va.) drove in a run off his fielder’s choice in the ninth.

The Sunday starter for ETSU – Blake Smith (Ninety Six, S.C.) – was pinned with the loss as he drops to 2-3 on the year. The senior hurled five innings while allowing six runs and walking four, and he struck out four Spartans to bring his season total to 38.

The Bucs sent out three relievers to face the Spartans in the series finale, and Peyton Taylor (Kingsport, Tenn.) posted the best outing for ETSU with his only miscue coming off a solo home run in the eighth inning. The red-shirt senior minimized the damage as he came in relief in the seventh inning after a single, a home run and a hit-by-pitch. Taylor struck out one and forced a pair of fly outs to stop the UNCG momentum.

Offensively, the Bucs struck for seven hits with five of those coming after the sixth inning. Longley and Cullen Smith (Lebanon, Tenn.) each struck for a pair of hits. Cullen Smith touched home twice, and Longley drove in one RBI. Bailey and Chris Cook (Kingsport, Tenn.) each contributed a double. Aaron Maher (Brentwood, Tenn.) rounded out the hits for ETSU as he connected with a single in the seventh. He eventually came around to score to end the four-inning scoring drought.

The Bucs next game will be at Thomas Stadium on Tuesday, April 4 at 6:30 p.m. as the Bucs host Appalachian State.