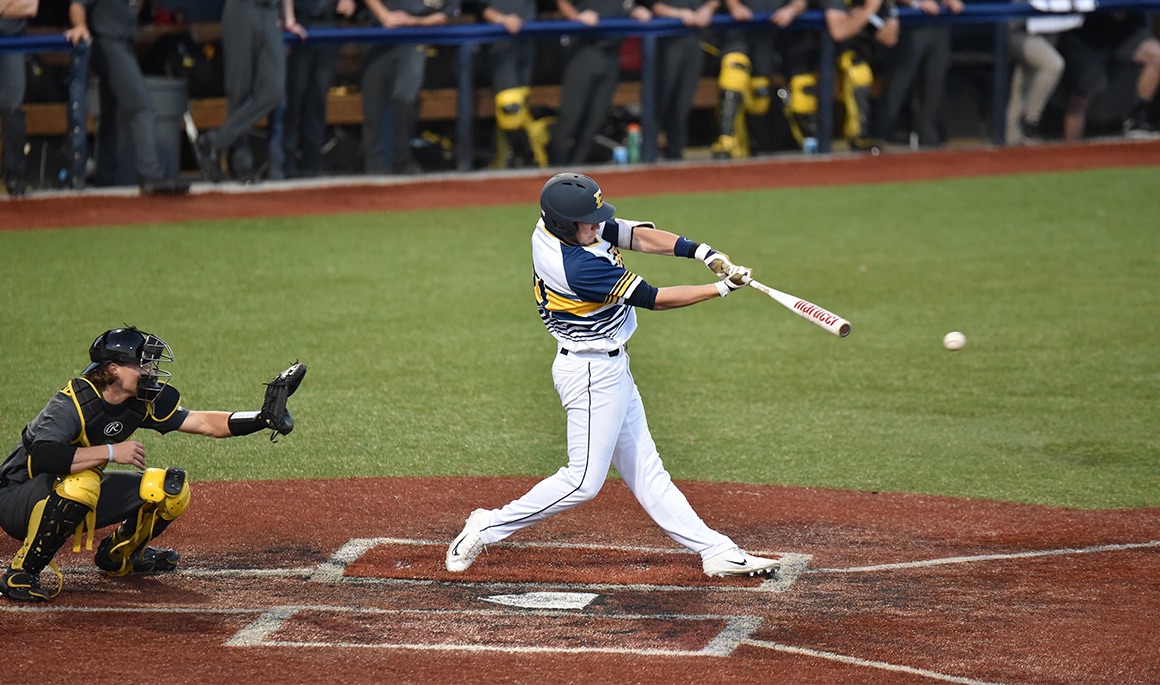 Caleb Longley delivered the game-winning hit in the eighth inning with an opposite field single through the right side.
Bucs down Appalachian State, 5-4
Appalachian State at ETSU | April 04, 2017
Related Links

Despite falling behind by two runs early, the Blue and Gold used a three-run fifth inning to take their first lead of the night, while Cook – who was making his season debut on the mound – worked out of a bases loaded situation to earn the save.

Maher tossed two scoreless innings with three strikeouts to secure his first collegiate win. On top of their dominating season debuts on the mound, Maher knocked two hits while scoring once and driving in one while Cook scored twice and recorded his fifth home run of the season.

As a team, the Bucs knocked ten hits with Hunter Parker (Chattanooga, Tenn.) recording the second extra-base hit for the Buccaneer squad with his sixth double of the season. The team knocked five hits with two outs, which resulted in two runs scored. ETSU also hit .333 with runners on base including going 3-for-7 with runners in scoring position.

The Bucs sent out seven pitchers on Tuesday with four relief pitchers posting shutout performances. Daniel Shaw (Memphis, Tenn.) earned the starting nod where he struck out three batters in two innings while allowing one run. Connor Bartow (Jonesborough, Tenn.) continues to be a solid option out of the bullpen as he hurled a scoreless and hitless fourth inning. Russell Koesters (Kingsport, Tenn.) matched Bartow as he worked a scoreless frame. Maher and Cook closed the final three innings where they combined for four strikeouts while scattering one hit.

Maher’s relief appearance marks the first outing since May 16, 2015 when he tossed 1.1 innings in relief against Wofford. Cook’s season debut marks his first outing on the hill since February 12, 2016 when he faced North Kentucky at Thomas Stadium.

The win on Tuesday ends ETSU’s two-game mid-week losing skid after the Bucs fell to Radford on the road and Marshall in Johnson City.

Shaw made his first start for the Blue and Gold, and Cade Gilbert (Ringgold, Ga.) made his first collegiate start as he earned the starting nod at second base. Gilbert finished the game going 1-for-3 with a run scored. He also recorded four put outs and two assists in the error-free game.

Maher earned his first collegiate win as he goes to 1-0 on the season, and Cook recorded his second collegiate save. Appalachian State reliever Sean Mason was pinned with the loss as he drops to 0-2 this season.

ETSU’s next game will be at Thomas Stadium as the Bucs host Western Carolina for a Southern Conference three-game set beginning on Friday, April 7 at 6:30 p.m.