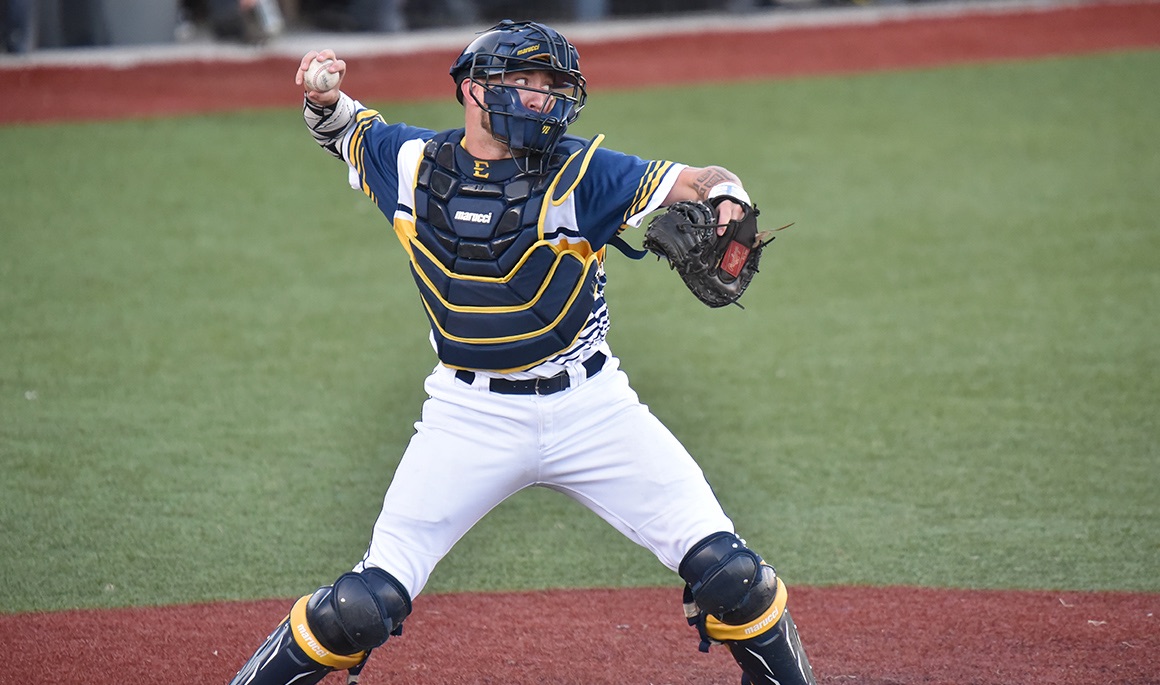 JOHNSON CITY, Tenn. (April 6, 2017) – After ending its two-game losing skid on Tuesday with a 5-4 win over Appalachian State, the ETSU baseball team will host Western Carolina for a three-game set starting April 7 at Thomas Stadium.

ETSU enters the weekend tilt with a 14-12 overall record and 2-4 SoCon mark this season. In the most recent game, the Bucs fended off Appalachian State on Tuesday where the Bucs used seven different pitchers en route to a 5-4 victory at Thomas Stadium.

In its last four conference games, ETSU is 2-2 with wins over Mercer and UNCG. Both of those teams are first and second in the conference, respectively.

The Blue and Gold continue to swing a hot bat as six Buccaneers are hitting above .300 this year including three batting above .375. Hunter Parker (Chattanooga, Tenn.) continues to lead the team in batting average as he hits at a .409 clip, but junior Aaron Maher (Brentwood, Tenn.) has pulled his batting average to .390 for the second-best mark on the team. Christian Bailey (Kingsport, Tenn.) has started all 26 games at first and has hit at a .378 batting average including a team-best nine doubles.

Chris Cook (Kingsport, Tenn.) knocked his fifth home run of the season against Appalachian State to move into a tie for first on the team in homers. Caleb Longley (Cleveland, Tenn.) is the second Buccaneer to knock five home runs. Four of the five total home runs for the Cleveland, Tenn. native have come in series openers and inside Thomas Stadium.

As a team, the Bucs tote a 4.85 ERA including tossing two complete game shutouts courtesy of Friday starter Ryan Simpler (Lewes, Del.) and Sunday starter Blake Smith (Ninety Six, S.C.). Simpler will open up the series against the Catamounts, and he has the most wins (4) and strikeouts (48) on the team. Out of the ETSU starting pitchers, he has the fewest walks allowed (9), and he is tied for the lowest opposing batting average (.273). Smith has tossed 44.1 frames this year in seven starts where he also limits opponents to a .273. He is also 2-3 this season. Last year, he picked up the win in the series opener in Cullowhee, N.C against WCU.

Cook and Maher pitched in their first outings this season, and the duo combined for three innings where they allowed just one hit and struck out four Mountaineers. Connor Bartow (Jonesborough, Tenn.) has been successful this season as he has worked in six games and sports a 0.00 ERA without allowing a walk. Dillon Cate (Sevierville, Tenn.) has pitched in 10 games this year with all appearances in relief. Also, he sports a 2.79 ERA while striking out 13 batters.

As the reigning SoCon Tournament champions, Western Carolina comes into the weekend with a 12-15 overall record and 4-2 mark in the SoCon. The Catamounts are fresh off a three-game sweep of The Citadel at home, and in the three games with the Bulldogs, WCU outscored The Citadel 24-4 including winning the series finale 14-1 in seven innings.

The Catamounts have played stiff competition this season, and Western Carolina handed the reigning NCAA Champions, Coastal Carolina, its first loss of the season in Conway, S.C. WCU has faced five other nationally ranked opponents and even upended No. 20 North Carolina State 9-8 on the road.

Western Carolina had a trio of players hear their names called in the 2016 MLB Draft. Two of which were seniors, and one player, Bryson Bowman, returned to the diamond for his final season. The red-shirt senior leads the team this year in batting average (.353) slugging percentage (.549), RBIs (27), hits (36), walks (20) and runs scored (27). He has 11 combined extra-base hits including the second most home runs on the squad (4).

Three other Catamounts join Bowman hitting above .300 this season with Nobu Suzuki hitting at a .313 clip in 21 starts. The Walt Nadzak Most Outstanding Player of the 2016 Southern Conference Tournament, Matt Smith, comes to Johnson City with a .295 batting average while sporting a team-best nine doubles and eight stolen bases.

The Catamounts have a solid starting rotation this year with Friday starter, Bryan Sammons, having the most success season. He is 4-1 on the year with a 2.84 ERA in seven starts. He leads the team with 53 total strikeouts. The Bucs will face starter Brendan Nail on Sunday, and he averages the most strikeouts per inning with 1.26 per frame.

As a pitching staff, Western Carolina enters the weekend series with a 6.47 ERA and 213 strikeouts.