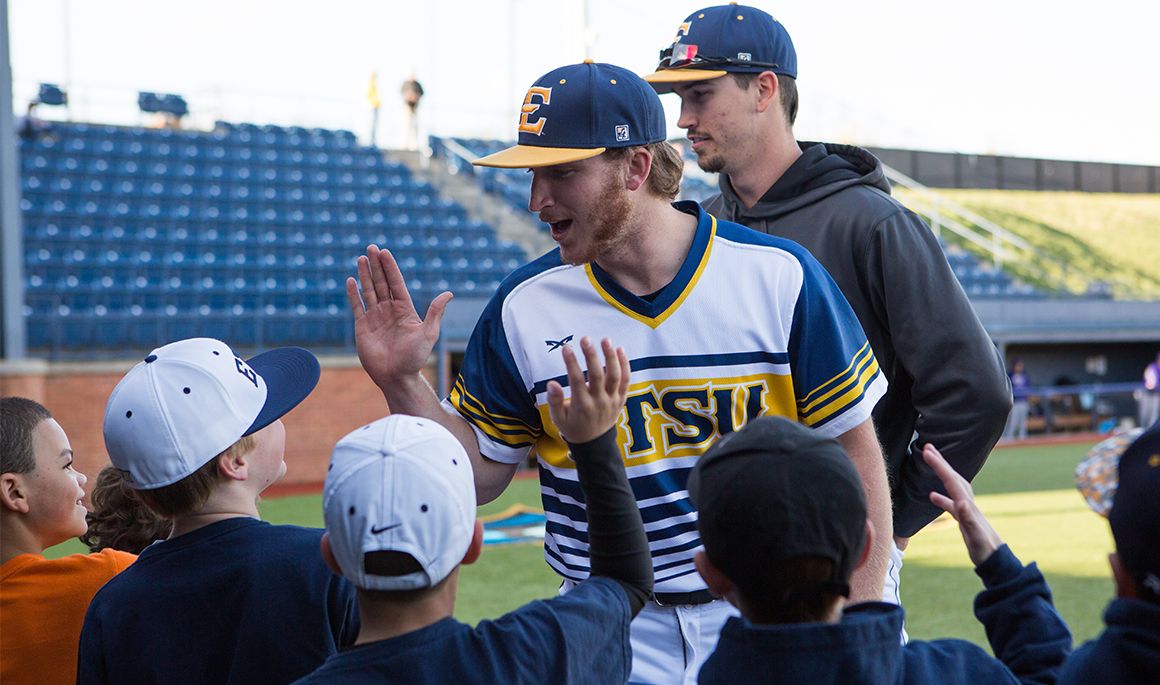 Last Game Recap and About the Bucs

ETSU had strong pitching performances in Tuesday’s upset win against the Vols. Highlighting the pitching staff performances was senior starting pitcher Jamin McCann (Kingsport, Tenn.). He tossed five scoreless innings where he struck out five Volunteers and surrendered only one walk. He earned the win in his first start since March 18 at Miami University. He moves to 3-0, and he remains the only undefeated starter for ETSU with at least two starts.

Aaron Maher (Brentwood, Tenn.) provided an early spark for the ETSU offense in the game as he led the team with three hits including a double. Christian Bailey (Kingsport, Tenn.) continued to hit the ball hard as he posted another multi-hit game and plated three RBIs to lead the squad. Jammer Strickland (Knoxville, Tenn.) launched his second home run of his ETSU career as he smoked a solo home run in the second inning off the scoreboard. As a team, ETSU walked eight times and struck out six times in the game. On the year, the Bucs have walked 142 times and struck out 180 times as opposed to opponents walking a combined 111 times and striking out 242 times.

Prior to their game with Norfolk State that’s being played Wednesday night, the Tribe are 18-15 overall and 4-5 record in the Colonial Athletic Association. William & Mary is an impressive 12-4 on its home turf, but on the road, the Tribe is 3-11 with their lone wins coming against UNC-Wilmington, Delaware and VCU.

William & Mary are playing four consecutive road games starting tonight with a game at Norfolk State, which was a makeup game from earlier in the season. Following the one game clash, the Tribe will travel to Johnson City for a three-game set with ETSU.

In the last five games, the Tribe is 3-2 with a pair of wins coming against Elon at home to win its first CAA series.

Heading into the Norfolk State game, Brandon Raquet leads the team with a .346 batting average. He has played in 32 games and started 26. Cullen Large leads the squad with 17 extra-base hits including a team-leading 12 doubles. He has knocked three home runs and recorded a pair of triples. Right behind him is Ryan Hall who hits at a .328 clip, and he leads the team in slugging percentage at .520 and runs scored with 36. Charles Ameer is a perfect 4-for-4 in stolen bases this season as he has started in all 33 games for the Tribe.

Brandon Raquet’s brother, Nick Raquet, is the Tribe’s stud starting pitcher as he has started in seven games and sports a 1.98 ERA. He is 1-1 on the year in 41 innings pitched, and he has limited opponents to 32 hits and a .216 batting average. Bodie Sheehan has tossed one of the two shutouts for William & Mary as he is 4-2 on the year with a 3.88 ERA. He leads all starters with an opposing batting average of .208 and 55 strikeouts.

Robert White leads the team in saves with four. He has appeared in 14 games and has worked 15 innings on the hill. Charlie Fletcher is a key reliever for William & Mary as he is 1-0 on the year with a 3.31 ERA in a team-leading 18 appearances. He forces batters to put the ball in play as he only has nine strikeouts this year in 16.1 innings of work.