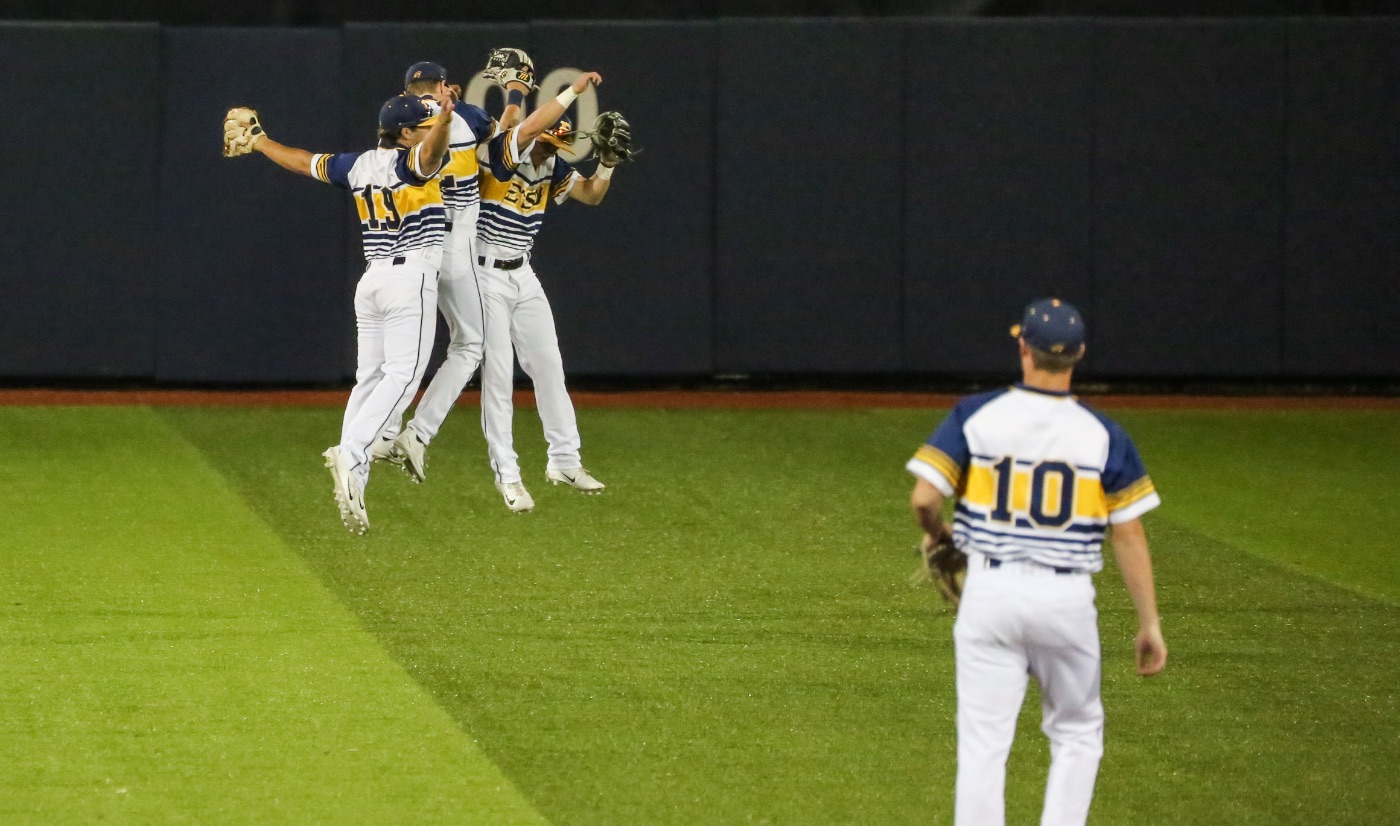 JOHNSON CITY, Tenn. (April 13, 2017) – The ETSU offense, pitching and defense was nearly flawless in the series opener with William & Mary on Thursday at Thomas Stadium as the Bucs thrashed the Tribe 15-3 with the Blue and Gold pounding 17 hits and Ryan Simpler (Lewes, Del.) striking out a career-high 11 batters.

The ETSU bats exploded in game one of the series as the Bucs registered 17 hits, which is one short of tying a season high. Of those 17 hits, eight went for extra bases including three home runs. Eight different Buccaneers totaled all eight extra-base hits.

Every starter recorded at least one hit including six Buccaneers registering multi-hit games. Christian Bailey (Kingsport, Tenn.) and Blake Rowlett (Clarksville, Tenn.) each finished the game going 3-for-4 with each contributing a home run. Bailey crushed his second career home run to left center, and Rowlett poked an opposite field two-run homer, which was his fifth of the year. Cullen Smith (Lebanon, Tenn.) demolished his first collegiate home run as he drove the ball over the right-center field wall in the first inning.

The Buccaneer pitching staff shined, as well. Starting pitcher, Simpler, shut down the William & Mary offense for six scoreless innings. The junior recorded a career-high 11 strikeouts where he averaged 1.57 strikeouts per inning. In three of the seven innings pitched, he recorded at least two strikeouts including a three-strikeout frame in the fourth inning.

Matt Turner (Knoxville, Tenn.) and Daniel Sweeney (Johnson City, Tenn.) combined for the final two innings as neither allowed a hit or run. Turner struck out a pair of batters, and Sweeney sat down one Tribe player as he finished the game. Between the three ETSU pitchers, the trio combined for 14 strikeouts and only two walks.

The ETSU offense scored all 15 runs before William & Mary could get on the board in the seventh inning. The Bucs went an impressive 8-for-16 with runners in scoring position and succeeded 17 times in advancing runners. Also, the Buccaneer offense batted .400 in two-out situations (6-for-15).

William & Mary had minimal chances to get on the board as the Buccaneer pitching staff shut down the Tribe offense. The Tribe was only able to get one leadoff runner on base in the nine-inning game and only connected with two hits in 12 chances with runners on base.

The Bucs move to 16-15 overall as Simpler (5-3) earns his fifth win of the season. William & Mary drops to 18-17 overall, and Tribe starting pitcher Daniel Powers moves to 3-4. The Tribe has lost four straight games to four different opponents, and ETSU is on a two-game win streak after downing Tennessee 10-2 inside Thomas Stadium on Tuesday.

Game two of the ETSU and William & Mary series is set to begin at 6:30 p.m. at Thomas Stadium on April 14. Senior Blake Smith (Ninety Six, S.C.) is scheduled to get the ball for ETSU for his ninth start of the season.