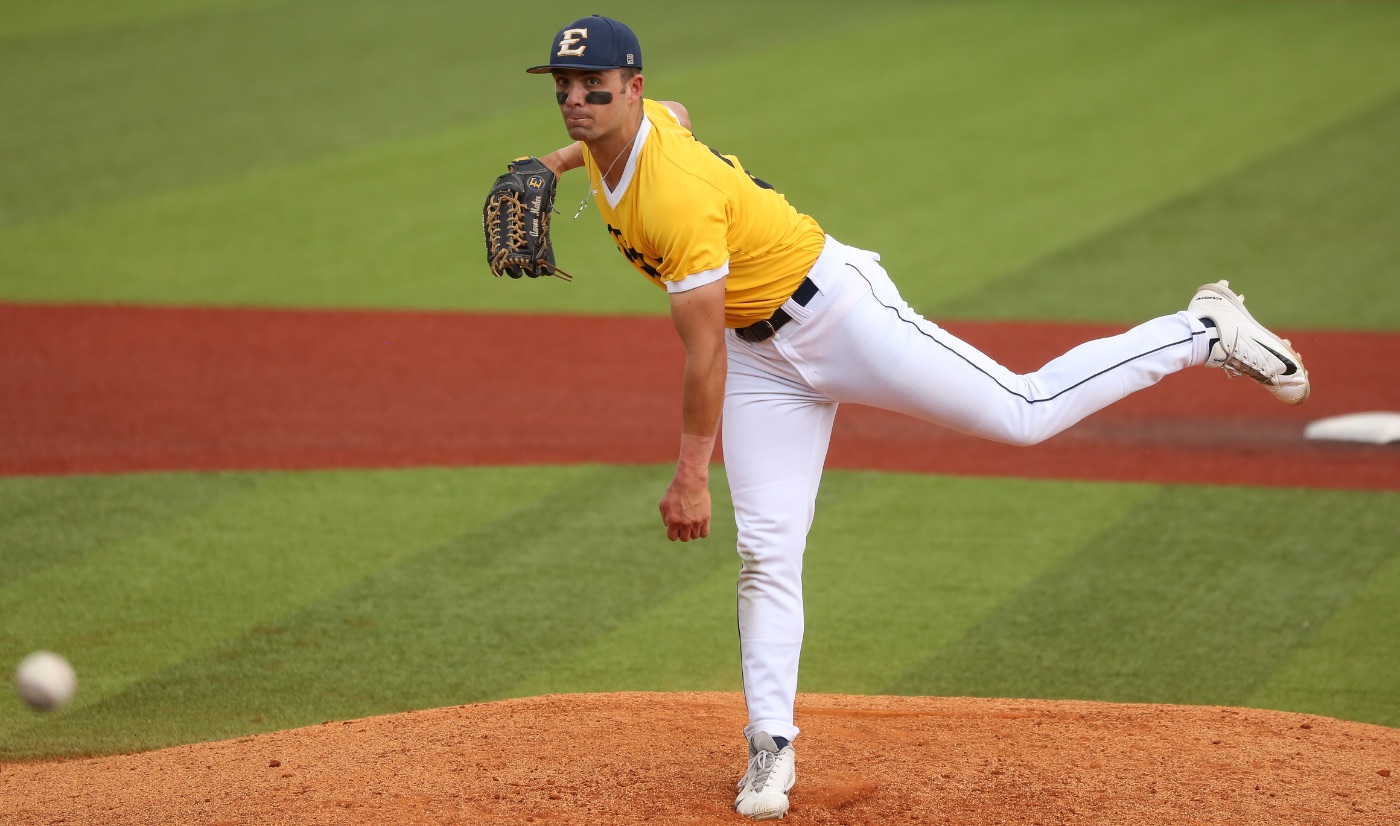 Aaron Maher (pictured) tosses one inning on Saturday where he earned the win against William & Mary.
BUCS SWEEP! ETSU rallies past William & Mary with a four-run eighth inning
William and Mary at ETSU | April 15, 2017
Related Links

JOHNSON CITY, Tenn. (April 15, 2017) – For the first time this season, the ETSU baseball team swept a three-game series as the Bucs rallied past William & Mary on Saturday afternoon 8-6 at Thomas Stadium.

The Bucs battled back-and-forth with the Tribe as ETSU regained the lead twice. ETSU scored in the first two innings and the last two innings. The biggest runs of the game for ETSU came in the eighth inning as the Bucs were down 6-4. ETSU struck for four runs in the frame, which gave the Bucs their biggest lead of the afternoon (2). The Tribe tried to rally back with a leadoff walk in the ninth, but after a fly out, Chris Cook (Kingsport, Tenn.) induced a game-ending double play to seal the 8-6 victory and the sweep.

ETSU pounded out another double-digit hitting performance as the Bucs drilled 12 hits including five for extra bases. Of the five extra-base knocks, red-shirt juniors Cook and Caleb Longley (Cleveland, Tenn.) recorded all five. Cook roped a pair of doubles and his sixth home run of the season, which gave ETSU a 3-2 advantage in the second frame. Longley came up with two clutch hits with a solo, opposite field home run in the seventh inning and a bases clearing double in the eighth to put ETSU ahead for good.

Longley led the team with three RBIs where Cook paced the team in runs scored with two.

Christian Bailey (Kingsport, Tenn.) cut the ETSU deficit in half in the first inning as he singled through the left side to score Cook from second base. Later in the game, Bailey connected with an opposite field single, which tied the game at 6-6 in the eighth inning. Bailey ended the game going 2-for-5 with a pair of RBIs and a run scored.

The one through five hitters for ETSU combined for 10-for-23, and the five Buccaneers accounted for all eight runs as they all touched home at least once.

The ETSU bullpen silenced the Tribe as all four Bucs combined for six innings of work while allowing one run and three hits. Russell Koesters (Kingsport, Tenn.) was the first reliever for the Blue and Gold, and he twirled two scoreless innings while allowing one hit and striking out one. Drew Korzybski (Knoxville, Tenn.) matched Koesters with two innings of work, but he made one mistake, which was a leadoff home run by Cullen Large.

Aaron Maher (Brentwood, Tenn.) made his second appearance of the season as he tossed a scoreless eighth inning. He struck out one without allowing a hit. He earned his second victory as the Bucs plated four runs in the eighth to regain the lead. Cook slammed the door as he faced the minimum and ended the game with a 6-4-3 double play. The save was Cook’s second of the season and the third of his career.

The ETSU pitching staff limited the Tribe to just one hit in two out situations.

The William & Mary starter struck out nine Buccaneers in six innings of work, but he received the no-decision after leaving with the lead. Nick Brown was pinned with the loss as he pitched two innings while allowing five runs off five hits. Brown drops to 3-4 on the season.

With the sweep, ETSU moves to 18-15 overall, and William & Mary drops to 18-19 as the Tribe continues their struggles by dropping six straight contests. The sweep of William & Mary is the first sweep at home since last year when the Bucs downed VMI in a three-game Southern Conference matchup.

ETSU will take two days off before the Bucs welcome Virginia Tech to Johnson City on April 18. The game will conclude theW&M Buccaneers longest home stretch of the season (12 games). First pitch against the Hokies is set for 6:30 p.m. at Thomas Stadium. You can purchase tickets here for the game.