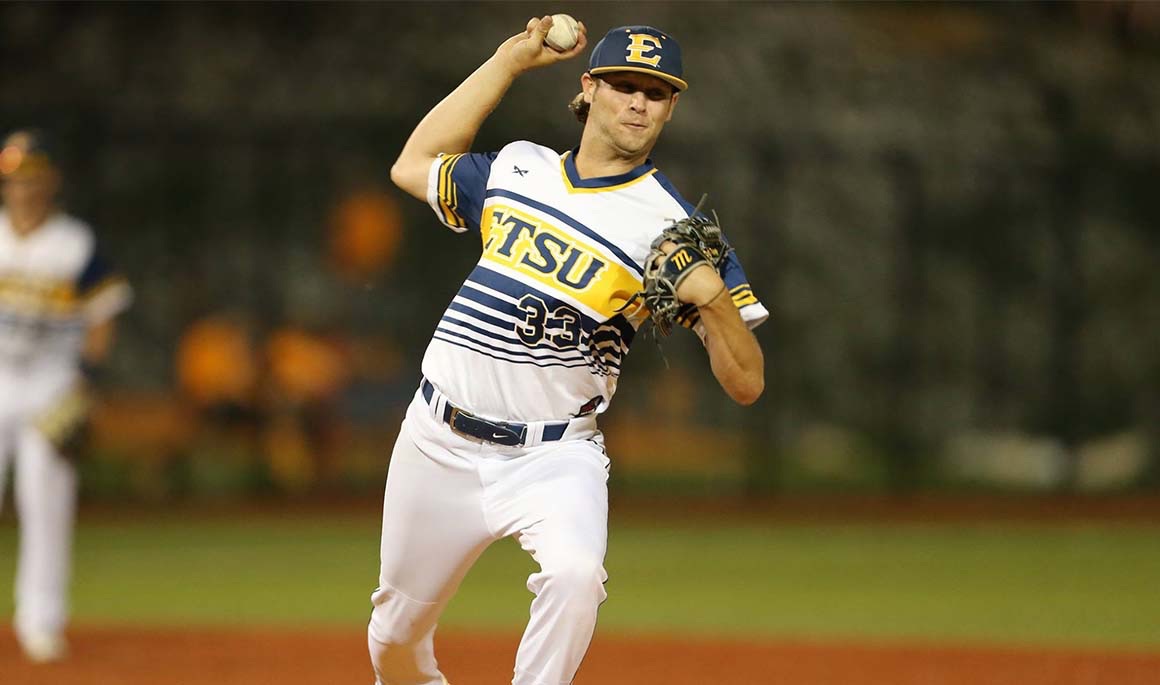 The Hokies came into the contest with Jack Owens leading the country in hits and Sam Fragale ranked fourth in the nation in home runs. However, ETSU kept the high-powered VT offense in-check as Griffin Krieg (Nashville, Tenn.) and the Buccaneer bullpen held the Hokies to five hits in the mid-week clash.

Krieg was making his 32nd start of his career and his third start of the season. He dazzled in his outing as he twirled six innings with 91 pitches (55 strikes). He allowed three hits and two runs, and the red-shirt senior was two strikeouts shy of matching a career-high as he sat down eight Hokies in the 7-4 victory.

Dillon Cate (Sevierville, Tenn.) was the first reliever for the Bucs, and the red-shirt junior worked 1.1 innings where he allowed one hit and one run that was unearned while striking out three.

Daniel Shaw (Memphis, Tenn.) pitched out of a game-tying, bases loaded situation in the eighth inning. The junior came out of the bullpen and struck out the first two batters he faced to end the threat and preserve the four-run advantage for the Bucs. He closed out the game and earned his first save at ETSU.

The ETSU pitching staff struck out 14 batters with each pitcher recording at least three strikeouts. The Bucs minimized VT’s chances to score as the Hokies only had six opportunities with runners in scoring position. The Buccaneer pitching staff also only allowed one two-out hit whereas the ETSU offense totaled five two-out hits against Hokie pitchers.

The Buccaneer offense backed Krieg and the pitching staff as they posted multi-run innings in three of the eight innings.

The Hokies struck an early 1-0 lead in the first off a pair of singles. After being held scoreless for the next two innings, ETSU gained its first lead of the game in the third off a one out, two RBI double from Hagen Owenby (Knoxville, Tenn.).

Virginia Tech knotted the game in the fifth inning with a leadoff homer, but the Buccaneer offense came roaring back with a pair of runs highlighted by RBI doubles from Aaron Maher (Brentwood, Tenn.) and Christian Bailey (Kingsport, Tenn.). The Bucs struck for two runs off three hits in the inning to regain the lead, 3-2.

In the seventh inning, the Bucs added three insurance runs off three two-outs hits. After getting two outs, the Hokies pitched to Bailey, and he made them pay as he stroked a two RBI double to left field for his second two-bagger of the night. Caleb Longley (Cleveland, Tenn.) followed two pitches later with an opposite field double to score Bailey to take the commanding 7-3 lead.

Virginia Tech tried to muster a comeback as Rahiem Cooper dropped a solo home run over the right field wall, but the Bucs stayed strong and preserved the 7-4 victory.

The win over the Hokies marks the first victory for the Blue and Gold since 2009 and ends a five-game losing skid against VT.

Bailey led the offensive surge as the junior went 3-for-4 with three RBIs and a pair of doubles. He boosted his season total to 13 doubles, which leads the squad. Chris Cook (Kingsport, Tenn.) and Maher each knocked two hits with Maher leading the Bucs with three runs scored. Hunter Parker (Chattanooga, Tenn.) stroked a single to lead off the two-run third inning, and he finished the mid-week contest going 1-for-3 with two runs scored and a walk.

The two through five hitters for ETSU accounted for all seven RBIs with Bailey and Owenby combining for five RBIs.

Krieg earns his first win of the season, and he moves to 1-2 on the year as Andrew McDonald drops to 2-3 on the season. Shaw earned his first save at ETSU.

Sporting a five-game winning streak, the Bucs look to carry their momentum on the road as they return to Southern Conference action against Furman. The first game of the three-game set is scheduled for Friday, April 21 at 6 p.m. in Greenville, S.C.