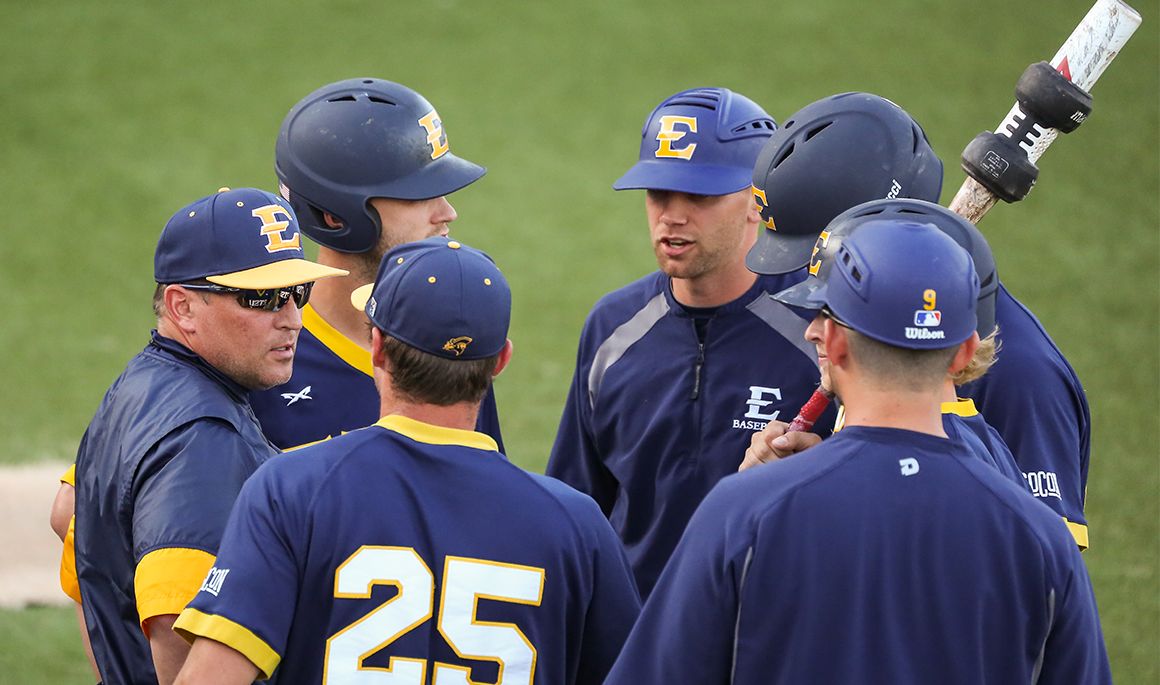 ETSU has won five straight games including two of those victories coming against “Power Five” opponents – Tennessee and Virginia Tech. Sandwiched in between those two victories, the Bucs swept their first three-game series of the season against William & Mary.

The Blue and Gold enter the SoCon set with a 19-15 overall record and a 2-7 conference mark.

After a three-hit game against VT, Christian Bailey (Kingsport, Tenn.) jumped over a .400 batting average as he now sits .403 in 34 starts at first base. He recorded a pair of doubles and three RBIs against Virginia Tech on Tuesday. The junior still holds the team lead in doubles (13) and hits (58), and he gained the team lead in RBIs with 34. Aaron Maher (Brentwood, Tenn.) is right behind his teammate as he is now hitting at a .369 clip, which is second on the team. Maher is leading the team in runs scored (43) and stolen bases (11) as he is second on the ETSU squad in hits (52), doubles (11) and total bases (71).

Chris Cook (Kingsport, Tenn.) keeps hitting the cover off the ball as he is batting at a .347 average in 34 starts. He has connected with 51 hits and has touched home 39 times for the second-most on the team. Caleb Longley (Cleveland, Tenn.) has been leading the team in power numbers as he is tied for first in homers with seven and first on the team in slugging percentage (.619). Longley is also tied for the second-most stolen bases on the team as he is a perfect 6-for-6 on the year.

Blake Rowlett (Clarksville, Tenn.) has seen his batting average creep up in the last several games as he is now connecting at a .262 batting average. He is second on the Buccaneer squad in home runs with six while he has driven in 29 RBIs.

Griffin Krieg (Nashville, Tenn.) tossed his best outing this year on Tuesday as he twirled six innings against a power-hitting Hokie lineup. He scattered three hits and allowed two runs while striking out eight Hokies. He picked up his first win of the season in three starts.

Ryan Simpler (Lewes, Del.) has been on fire lately as the Friday starter for the Blue and Gold. This year he sports a 5-3 record including a 3.02 ERA. His ERA is the fifth-best among SoCon pitchers, and he has recorded the fourth-most strikeouts in the league with 68. In nine starts and 59.2 innings pitched this year, he has limited batters to a .258 batting average and only 20 earned runs.

Saturday starter Blake Smith (Ninety Six, S.C.) has been solid in three road contests this year. He is 2-0 with a 0.78 ERA in 23 innings pitched in such games. He has struck out 25 opposing batters on the road and only walked four while allowing just two earned runs. He has held opponents to a .229 batting average and has only allowed one extra-base hit, which was a double.

Furman also enters the weekend series with a winning streak as the Paladins swept Western Carolina in Cullowhee, N.C. last weekend. They continued their win streak to four games as they downed Presbyterian on Wednesday at home, 11-6.

Leading the team offensively is junior first baseman Brandon Elmy. He is hitting at a .359 mark while he leads the team in doubles (12), home runs (6), total bases (82), slugging percentage (.566) and hits (52). Carter Grote and Landon Kay are connecting with a .324 and .322 batting average, respectively. Grote has started in all 35 games as he leads the team with 29 RBIs and five triples. Kay has played in 30 games and started in 29, and he has connected with 39 hits with nine of those being doubles.

Junior pitcher Will Gaddis headlines the starting rotation for Furman as he is 3-3 on the year with a 2.30 ERA in nine starts. His ERA is the second-best in the conference while he limits opponents to a .228 batting average, which is the eight-lowest in the SoCon. He has allowed the fewest runs (18) on the squad in 62.2 innings pitched. He has also struck out 59 batters and walked just 12 opponents.

Sunday starter Matthew Quarles is fresh off being named the SoCon Pitcher of the Week after his complete game performance at Western Carolina. He hurled nine innings while allowing four hits, one earned run, no walks and striking out eight Catamounts. On the year, Quarles is 4-2 with a 5.00 ERA. He leads the team in wins and complete games (2).