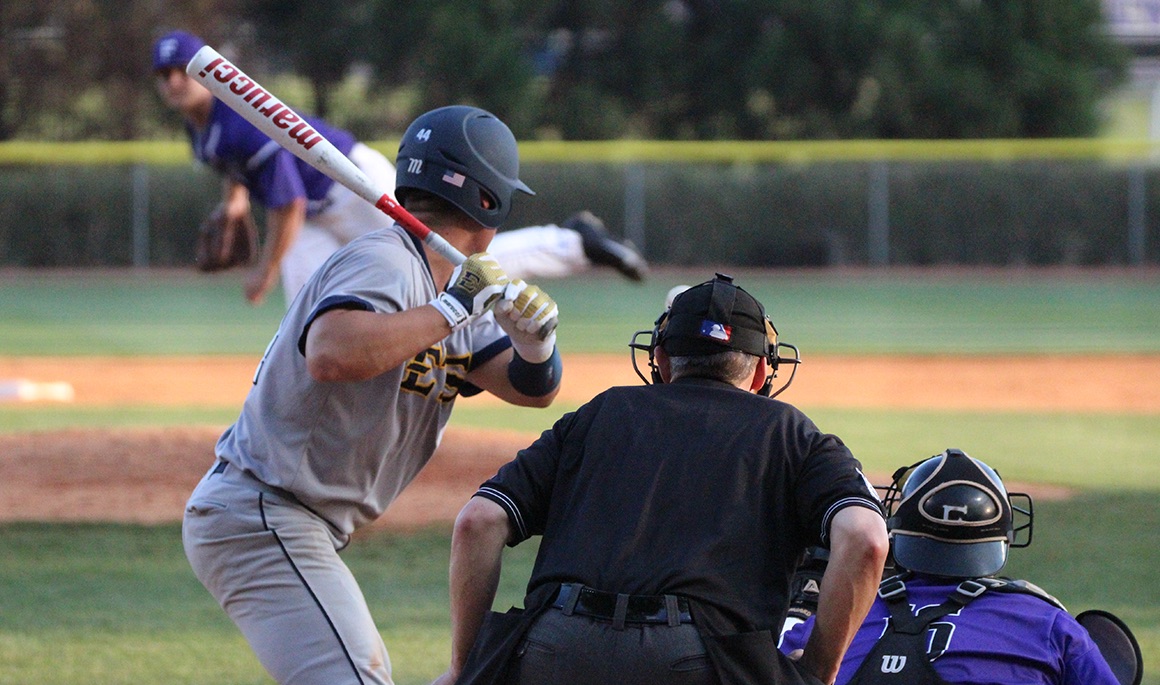 GREENVILLE, S.C. (April 21, 2017) – Sporting a five-game winning streak, the ETSU baseball team saw that stretch come to an end in extra innings at Furman on Friday night as the Bucs fell 9-8 in ten innings at Latham Stadium in Greenville, S.C.

The Bucs battled back after being down two runs in the seventh with a run in both the eighth and ninth innings, but Furman’s Sims Griffith tallied the game-winning hit in the tenth to vault Furman to a one-run victory over ETSU.

Furman took the early lead in the second with a RBI single from Carter Grote. However, the Blue and Gold came back in the next inning as the Bucs tallied three runs off five hits to take a 3-1 lead.

In the third inning, Chris Cook (Kingsport, Tenn.) drilled a two-run homer to left field, which scored Jammer Strickland (Knoxville, Tenn.) after his leadoff single. Hagen Owenby (Knoxville, Tenn.) drilled a double to left field, which scored Aaron Maher (Brentwood, Tenn.) from first base to account for the third run of the frame.

The Bucs increased their lead with a pair of runs in the top of the fifth. Christian Bailey (Kingsport, Tenn.) recorded the two runs as he spanked his second home run of the season to left field.

Furman knotted the game as Cameron Whitehead knocked the third home run of the game between the two squads.

After holding ETSU scoreless in the top of the sixth, Furman plated four runs in the bottom half to regain the lead at 7-5. Following a walk, the Paladins recorded three extra-base hits to regain the lead. Jake Crawford started the rally with a triple, and Jabari Richards knocked a triple of his own to tie the game at 5-5. Grote connected with the third extra-base hit in a row as he smoked a double down the left field line to give Furman the 6-5 lead. Sky Overton capped off the inning with a RBI single after an ETSU pitching change.

The Bucs didn’t surrender as they plated a run in the seventh to pull within one run. Cook drilled a double to left field, and following a fly out, Owenby pulled a single through the left side to score his teammate to make the game 7-6.

However, Furman matched ETSU as the Paladins plated a run of their own off a throwing error.

Down 8-6, ETSU came back with a vengeance by scoring a run both the eighth and ninth innings. Cullen Smith (Lebanon, Tenn.) led off the eighth inning with a seven-pitch walk, and Blake Rowlett (Clarksville, Tenn.) followed with an opposite field double to left center to put two runners in scoring position with no outs. Hunter Parker (Chattanooga, Tenn.) scored Smith from third off a fielder’s choice, but Rowlett was caught napping at second to record the second out of the inning. Parker swiped second for his seventh stolen base of the year, but Cook grounded out to end the frame.

Furman threatened to match the Bucs with a run in the eighth, but Peyton Taylor (Kingsport, Tenn.) stranded Overton at third base after he reached on a leadoff single.

The Bucs had their best chance to go ahead again in the final inning as ETSU started a one-out rally. Owenby started the surge as he reached base on a throwing error by the Furman catcher. Bailey knocked a single to left to put two runners on base. After being held hitless in four at-bats, Caleb Longley (Cleveland, Tenn.) drilled a single down the left field line, which scored Seth Cunningham (Bristol, Va.), who pinch ran for Owenby, enough time to come in to score and tie the game at 8-8 with one out.

Following a Furman pitching change, Smith dropped down a safety squeeze in an attempt to score the go-ahead run from third, but Bailey was called out at home with a headfirst slide. Rowlett followed with a fly out, which stranded a pair of Buccaneers on the base paths.

Furman contributed a single in the ninth, but the batter never reached second as the Bucs forced a ground out and Taylor picked off the runner at first to end the frame.

In the 10th inning, the Bucs went down in order, which gave Furman a second chance to walk off at home. The Paladins started the inning with a leadoff single. After a sacrifice bunt and an intentional walk, Cook recorded a strikeout to make it two outs in the tenth inning. On a 0-2 count, Griffith dropped a single into left field, and Grote hustled home and scored the game-winner for Furman.

With the extra-inning, walk off win, Furman moves to 16-20 overall and 5-8 in Southern Conference play. The Bucs saw their winning streak come to an end as they drop to 19-16 overall and 2-8 in the SoCon.

The Bucs and Paladins will conclude the series tomorrow with a doubleheader at Latham Stadium beginning at 1 p.m. Blake Smith (Nintey Six, S.C.) is scheduled to start game two, and Jamin McCann (Kingsport, Tenn.) is set to start the series finale for the Blue and Gold.