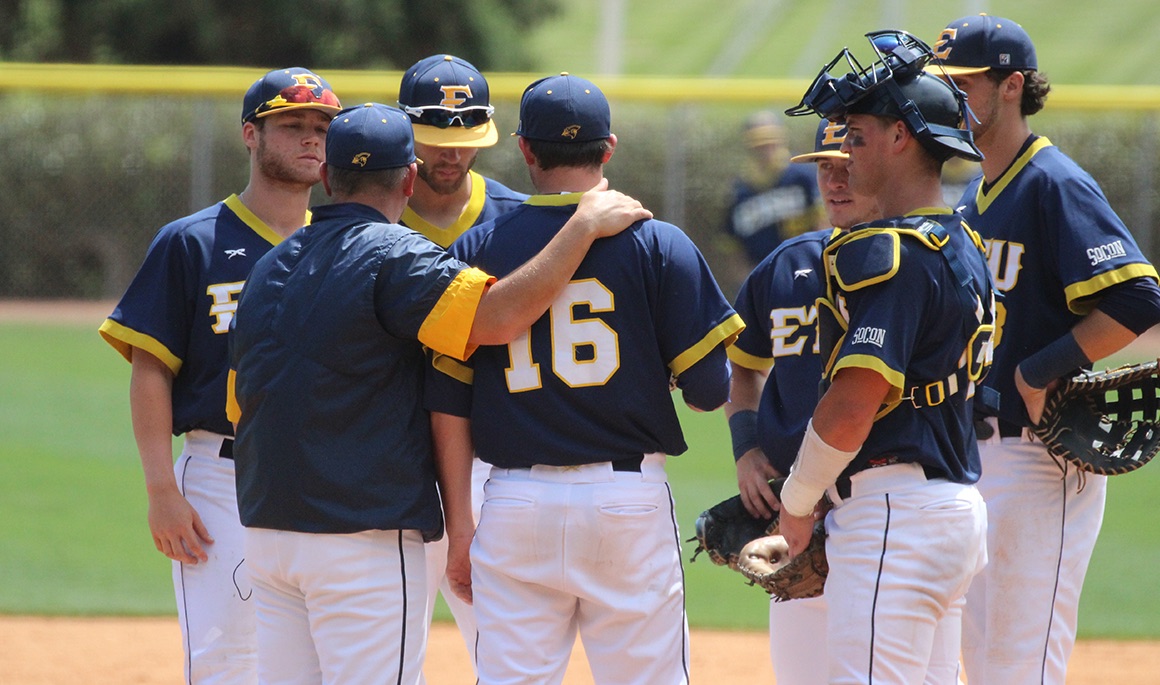 GREENVILLE, S.C. (April 22, 2017) – After falling in game one of the series at Furman, the ETSU baseball team dropped the doubleheader – 11-4 and 6-3 - to conclude the series with the Paladins on Saturday at Latham Stadium in Greenville, S.C.

The Bucs went toe-to-toe with the Preseason Conference Pitcher of the Year as ETSU struck Will Gaddis for eight hits in his seven innings of work. The Bucs tallied the only runs allowed by the junior as ETSU struck for three hits in a row to start the game.

Chris Cook (Kingsport, Tenn.) opened the game with a single up the middle. Aaron Maher (Brentwood, Tenn.) struck a triple down the right field line, which scored Cook from first. On the first pitch he saw, Hagen Owenby (Knoxville, Tenn.) knocked an opposite field single to take the early 2-0 lead for the Blue and Gold.

That was the only runs Gaddis would allow as he silenced the ETSU scoring for the next six innings. The Bucs were able to get a hit in five of the next six innings, but ETSU couldn’t capitalize as the Bucs left a base runner stranded in each of the frames.

Furman capitalized on ETSU’s scoring woes as the Paladins scored all eleven runs between the third and seventh innings including a five-run third inning. All 11 runs were unanswered, but ETSU ended that stretch in the last inning after Nolan Mullen came in to pitch the final frame for Furman.

ETSU struck for two runs in the last inning as Blake Rowlett (Clarksville, Tenn.) highlighted the scoring as he dropped a two-run homer against the wind in right field. It was his seventh of the year, which is a tie for the second-most on the ETSU squad.

Despite the seven-run difference, the Paladins only out-hit the Bucs by one (13-12). Four ETSU players registered multi-hit games. Owenby recorded the only RBI for a Buccaneer that slapped two hits, and Rowlett tallied the only multi-RBI game, which came off his two-run bomb in the ninth inning.

Cook and Cullen Smith (Lebanon, Tenn.) totaled a pair of hits, but the duo also touched home once in game one of the doubleheader.

The starters for both squads were pinned with the decision. Blake Smith (Ninety Six, S.C.) was given the loss as he drops to 3-5 this year, while Will Gaddis earned the victory (4-3).

ETSU was leading or tied with Furman for over half the game. Just like in the first game, ETSU jumped out to an early lead as Cook destroyed the first pitch of the game over the left field wall. The leadoff home run by Cook marks the first time that has happened for a Buccaneer since Paul Hoilman cranked a leadoff homer against Stetson on March 27, 2011.

However, that lead dissipated quickly as the Paladins started a two-out rally to match the Bucs in the first. Jason Costa started the rally with the first hit of the game. Sky Overton walked to move his teammate into scoring position, and Brandon Elmy took advantage as he singled through the right side in a 0-2 count to tie the game at 1-1.

The Bucs quickly regained the lead in the second as Cullen Smith split the left-center field gap with one out. Rowlett smoked a single to center, and Cullen Smith came running home to give ETSU its second lead of the game.

Just like the first inning, Furman came roaring back as Jabari Richards singled up the middle to take advantage of a leadoff walk.

After both teams were held scoreless for the first time in the game, ETSU took its third lead of the nightcap in the fourth inning. After getting back-to-back strikeouts to start the frame, Rowlett started the rally with an opposite field single. After stealing second – which was Rowlett’s second of the year – Hunter Parker (Chattanooga, Tenn.) drove a double down the left field line, which gave Rowlett plenty of time to score and give ETSU the 3-2 lead.

Furman tried to rally in both the fourth and fifth innings. The Paladins registered a hit in both innings including a one-out double in the fourth, but the ETSU pitchers stranded the Paladins on the base paths.

The Paladins took their first lead of the game in the sixth. Sims Griffith – who tallied the walk-off hit on Friday – slapped his second home run of the season to tie the game at 3-3. The Paladins piled it on after the solo homer with back-to-back singles, and Jake Crawford brought in the go-ahead run with a RBI groundout.

After a pitching change, Furman’s Carter Grote knocked a solo home run to lead off the seventh inning, which gave the Paladins a two-run lead. They did the same thing in the bottom of the eighth as Bret Huebner connected with his first collegiate home run to advance the lead to 6-3.

Between Furman’s starting pitcher, Matthew Quarles, and the reliever, Billy Greenfield, the duo combined to face the minimum in four of the last five innings. They allowed one walk in that stretch, which came with two outs in the sixth inning.

Rowlett registered the only multi-hit game for the Bucs as ETSU could only muster six hits in the second game of the doubleheader. He finished the game with a RBI and a run scored, and Parker tallied a RBI in three at-bats.

Krieg was given the loss as he drops to 1-3 on the year. Quarless earned the victory as he advances to 5-2, and Greenfield recorded his second save of the year.

The Bucs’ next game will be on the road as the Bucs travel to Boone, N.C. to face off against Appalachian State on April 25. First pitch is set for 5 p.m.