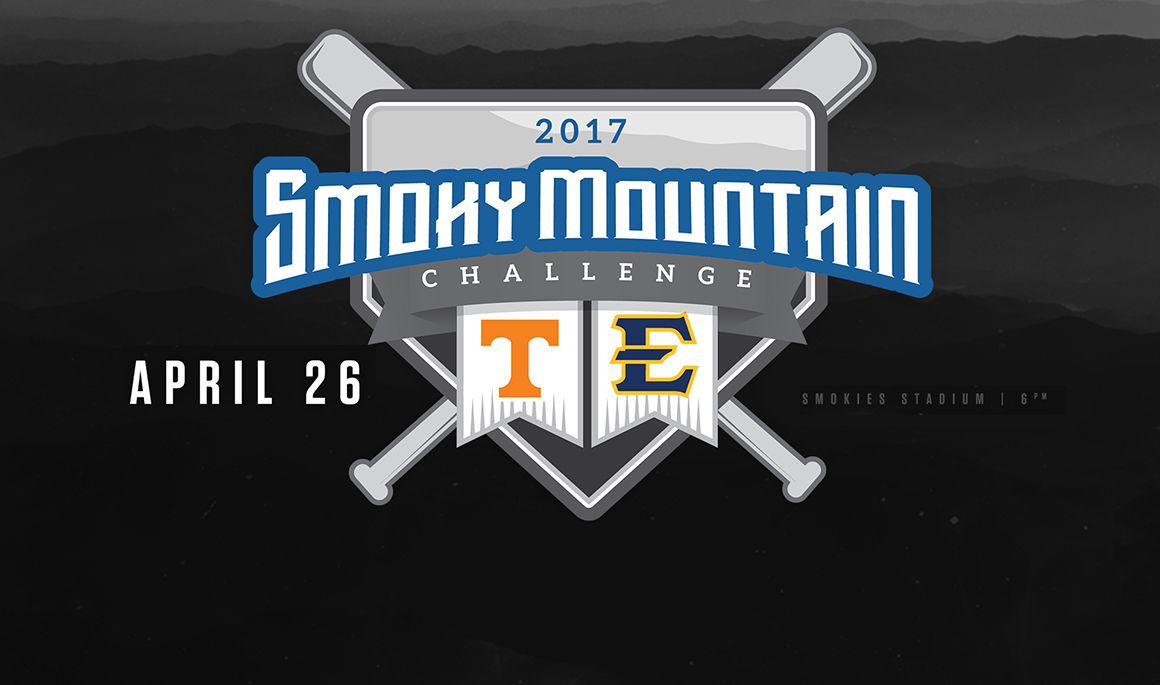 JOHNSON CITY, Tenn. (April 24, 2017) – Winners of three straight mid-week games including Tennessee and Virginia Tech, the ETSU baseball team will put that streak to the test as the Bucs travel to Appalachian State on Tuesday at 5 p.m. followed by competing in the Smoky Mountain Challenge with Tennessee at Smokies Park on Wednesday at 6 p.m.

The game on Wednesday, April 26 at Smokies Park – home of the Tennessee Smokies – is set to begin at 6 p.m. with gates opening at 5 p.m.

The game will feature multiple ticket options for fans. Field level seating prices will be $10 for adults, $8 for children and seniors, and $5 for current ETSU and UT students. The Smokies will also offer “All You Can Eat” options ranging from $19 for adults, $17 for children, and $15 for students. For more ticket information fans can call (865) 286-2300, visit smokiesbaseball.com, or visit the Smokies Box Office Monday through Friday between the hours of 10 am and 5 pm. Click here to purchase tickets online.

Smokies Stadium will be in full operation, as all concession stands will be open along with the Kids Zone, on-field games, music, and more. Tennessee Smokies ticket vouchers for the 2017 season will not be valid for this game.

A special ticket price is available for ETSU Faculty/Staff, fans, and students by using the promo code BUCS17. When purchasing tickets online, the code needs to be typed in the box where it says “Special Offer Code” and click submit.

*Anyone who purchases a ticket that is listed as ETSU faculty/staff or student may be asked to show a valid student ID.

ETSU enters the mid-week contests with a 19-18 overall record. ETSU has gone 5-3 in its last eight games including winning five straight games against Tennessee, William & Mary and Virginia Tech at home.

Chris Cook (Kingsport, Tenn.) and Hagen Owenby (Knoxville, Tenn.) posted strong offensive outings at Furman this past weekend as the pair recorded six hits each in the three-game conference series. Cook led the ETSU squad with five extra base hits (three doubles and two home runs) while he touched home four times and drove in three RBIs. Owenby tallied a double and three RBIs in 13 at-bats this weekend against the Paladins.

On the year, Christian Bailey (Kingsport, Tenn.) continues to lead the Blue and Gold offensively as he is hitting at a .395 clip in 37 games started. Cook made big strides in the last several games as he is now second on the Buccaneer squad in batting average at .352. He also took over sole possession in home runs as he tallied a pair of bombs against Furman last weekend. Caleb Longley (Cleveland, Tenn.) saw his team-leading hit streak (14 games) and on-base streak (27 games) come to an end Saturday as he went 0-for-4 with a pair of strikeouts against Southern Conference Preseason Pitcher of the Year Will Gaddis.

Ryan Simpler (Lewes, Del.) has continued to dominate on Friday night as he is 5-3 as the opening series starter for the Bucs. On the year, he is 5-3 with a 3.60 ERA in ten starts. He has a complete game shutout to his name in 65 innings pitched. The junior leads the team in strikeouts with 73 and limits opponents to a .263 batting average.

Cate and Bartow continue to find success out of the bullpen for ETSU. Cate has the third-most appearances on the team with 15 relief outings where he sports a 2.50 ERA. He has also struck out 25 batters in 18 innings of work. Bartow holds opponents to a .233 batting average where he has walked just one batter.

Appalachian State enters Tuesday’s game with a 16-24 overall record and a 6-12 Sun Belt Conference record. The Mountaineers have won two straight games and are 4-6 in their last ten games.

Drake Zupcic and Matt Vernon lead the Mountaineer offense as both are hitting at a .301 mark. Vernon leads the squad with 11 doubles and 50 hits, and Zupcic has 41 hits in 136 at-bats along with seven extra-base hits and 21 RBIs. Tyler Stroup leads the Apps with seven bombs on the year and 25 RBIs.

As a pitching staff, Appalachian State sports a 4.25 ERA in 40 games played. The Mountaineers allow opponents to hit at a .280 mark while their own offense connects at a .237 clip. The staff has allowed 33 home runs this year and walked 302 batters in 345 innings of work.

Tristan Helms and Reed Howell are the best relief pitchers for the Mountaineers. Helms leads the team with a 0.93 ERA in 14 appearances this year, but he has only tossed 9.2 innings and has walked five. Howell has competed in 18 games with 33 total innings. He has five saves to his name and averages one strikeout per inning, and he limits opponents to a .210 batting average.

The Vols enter the mid-week contest with a 20-17 overall record. They are fresh off an extra-inning victory at Texas A&M where UT defeated the Aggies 4-3 in 14 frames. Since losing to ETSU on April 11 at Thomas Stadium, UT has gone 3-4 with wins over Auburn, UNC Asheville and Texas A&M.

The game at Smokies Park – home of the Tennessee Smokies – is the second game of a three-game season series with ETSU and Tennessee. In the first game, the Bucs downed the Vols 10-2 at home. The eight-run defeat ties the second-largest margin of defeat this year for the Volunteers.

Jordan Rodgers continues to lead the UT squad with a .371 batting average, and he has reached base in all 36 starts this year. The senior also leads the Vols in runs (28), hits (56), doubles (9), RBIs (24), total bases (82) and slugging percentage (.543). He has walked 14 times and has swiped five bases on the year. Jeff Moberg is second on the team with a .331 batting average where he leads the team with six home runs and is second in runs scored with 25.

Jon Lipinski and Andrew Schultz continue to be the backbone of the UT bullpen as both have combined to appear in 28 games. Lipinski has a team-leading 0.98 ERA along with a 4-0 record in 16 appearances. He has hurled 18.1 innings where he has struck out 19 batters and only allowed two runs. Schultz has a 2.13 ERA in 12 starts this year, and he has struck out 16 batters in 12.2 innings of work. Schultz holds opponents to a .217 batting average while Lipinski limits batters to a .148 clip.