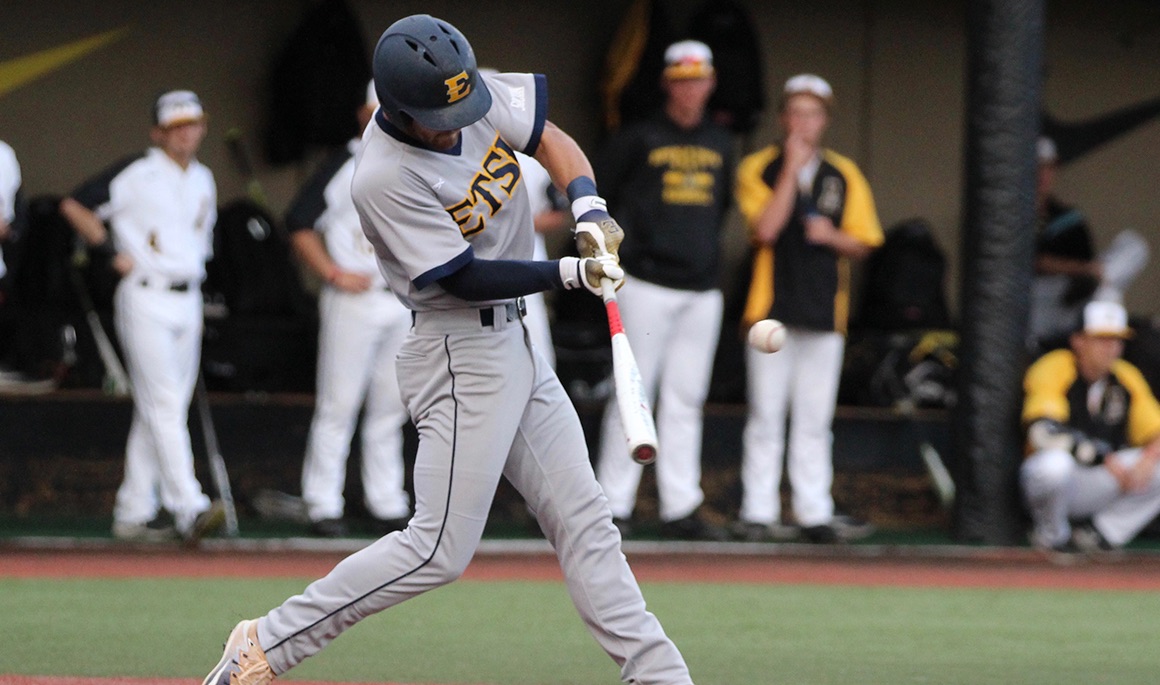 BOONE, N.C. (April 25, 2017) – In a back-and-forth battle, the ETSU baseball team faltered in the bottom of the ninth inning as the Mountaineers delivered a walk-off, solo home run at Smith Stadium to give Appalachian State the 8-7 victory on Tuesday in Boone, N.C.

Appalachian State’s Avery Jackson recorded the leadoff, walk-off home run, which vaulted the Mountaineers to an 8-7 victory in Boone. The Mountaineers ended the game by scoring three unanswered runs including the game-tying run in the eighth off a single up the middle along with the solo home run to left field in the ninth.

The battle at Smith Stadium saw five lead changes. The Bucs jumped out to an early 2-0 advantage in the first, but Appalachian State plated two runs to knot the game at 2-2. The Bucs regained the lead in the third with a pair of runs, but ASU answered in the bottom half to pull within one, 4-3.

For the first time in the game, the Mountaineers took the lead as they scored a pair of runs in the bottom of the fourth to take the narrow 5-4 lead. The lead dissipated quickly as the Bucs scored one in the fifth and two more in the sixth to take a 7-5 lead.

However, the Mountaineers kept chipping away as they pulled within one in the bottom of the six and later tied the game in the eighth.

ETSU out-hit App. State 13-12 in the nine-inning affair including knocking six doubles. The Bucs also walked four times and only struck out three times in 36 at-bats.

Recording four of those hits was Chris Cook (Kingsport, Tenn.). The red-shirt junior contributed a pair of doubles and two singles en route to leading the team with four runs scored.

In the last nine games, the Kingsport, Tenn. native is connecting at a .524 batting average with a team-leading 22 hits. In that same stretch, he has also connected with three home runs, nine doubles, 15 runs scored and recorded a .952 slugging percentage.

Also posting at least three hits on Tuesday was junior Christian Bailey (Kingsport, Tenn.) who knocked a trio of singles. He plated a pair of runs and even touched home once. Caleb Longley (Cleveland, Tenn.) recorded a pair of doubles in back-to-back innings, and Hagen Owenby (Knoxville, Tenn.) started the scoring for ETSU in the first inning as he clobbered a gap-splitting double to left-center. He finished the game going 1-for-2 with a pair of RBIs, two walks and a run scored. Blake Rowlett (Clarksville, Tenn.) knocked an RBI double in the fifth, which scored Longley after his leadoff double in the frame.

The three through five hitters for ETSU (Owenby, Bailey and Longley) plated six of the seven runs for ETSU and the trio recorded six of the 13 team hits.

Matt Turner (Knoxville, Tenn.) and Logan Gentry (Kingsport, Tenn.) were the lone pitchers for the Blue and Gold that posted scoreless outings. Turner worked 1.1 innings without a hit or run, and Gentry tossed 1.1 innings with a pair of strikeouts and no runs or hits allowed.

Dillon Cate (Sevierville, Tenn.) was given his first loss of the year as he drops to 0-1. Sean Mason of Appalachian State earns his first win of the season as he moves to 1-2.

ETSU drops to 19-19 overall while the Mountaineers advance to 17-24 and salvage a season series split with the Bucs.

ETSU will be back in action Wednesday against Tennessee at Smokies Park in Kodak, Tenn. First pitch in the Smoky Mountain Challenge is set for 6 p.m.