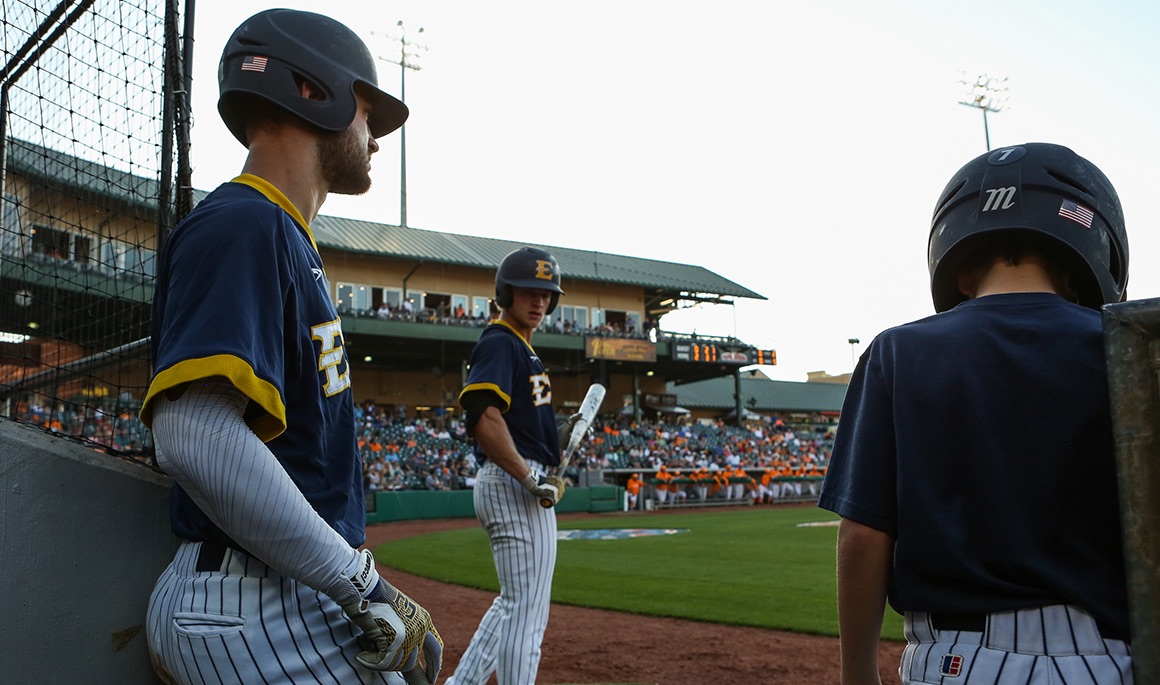 KODAK, Tenn. (April 26, 2017) – In the first-ever Smoky Mountain Challenge, the ETSU baseball team fell to Tennessee 8-1 at Smokies Stadium on Wednesday night in front of the biggest attendance for the Bucs this year – 3,351 fans.

The Bucs and the Vols squared off at Smokies Stadium in Kodak, and Tennessee scored early by plating a run in each the first and second innings. ETSU was able to cut the lead in half in the fifth frame as Chris Cook (Kingsport, Tenn.) knocked a two-out, opposite field single to score Cullen Smith (Lebanon, Tenn.).

However, UT scored six unanswered runs in the next three innings to seal the 8-1 victory in the neutral site matchup.

Cook continued swinging a hot bat as he led the ETSU squad with a trio of hits. Tennessee’s leadoff man, Jeff Moberg, matched Cook with three hits as the duo led both ball clubs with the most individual hits in the night game.

Cook knocked the only RBI for the Blue and Gold in the fifth inning as he dropped an opposite field single to right field. Smith – who led off the inning with his only hit of the night – touched home easily to make the game 2-1. The Bucs had a chance to knot the game after Aaron Maher’s (Brentwood, Tenn.) single to right, but the junior was tagged out at second base after trying to advance to second to put two runners in scoring position.

Maher, Smith and Cook recorded all five hits for the Blue and Gold as all five base knocks went for singles. The Bucs walked twice and struck out five times.

Getting his fourth start of the year, Griffin Krieg (Nashville, Tenn.) tossed 5.2 innings with three walks and one strikeout. Pitching in his second straight game, Matt Turner (Knoxville, Tenn.) finished the game as he allowed one run off a hit while striking out one.

Krieg was pinned with the loss as he drops to 1-4 on the year, and UT’s starting pitcher Will Neely earned the winning decision as he moves to 2-1 on the season.

ETSU drops to 19-20 overall and continues its losing streak to five straight. Tennessee moves to 21-17 on the season as UT evens the season series with ETSU at one game apiece.

The Bucs will return to Southern Conference action, as the Bucs host Wofford for a three-game series this weekend. The first match of the three-game set starts on April 28 at 6:30 p.m. at Thomas Stadium.