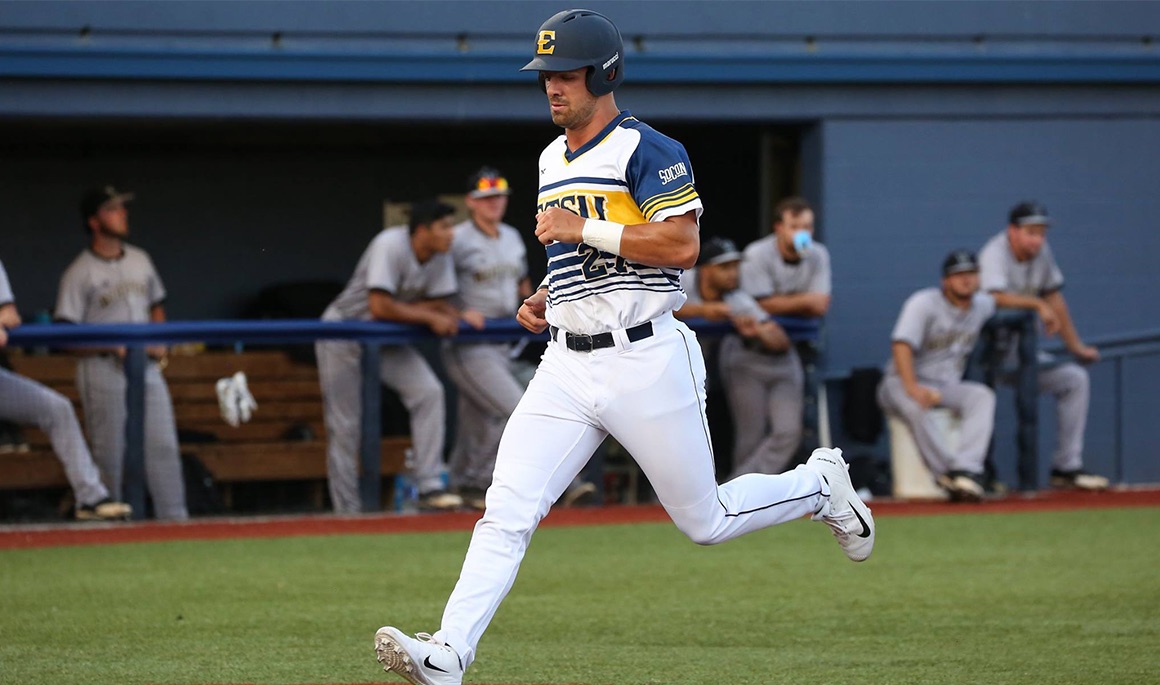 JOHNSON CITY, Tenn. (April 29, 2017) – The ETSU baseball team dropped game two of the series with Wofford on Saturday at Thomas Stadium as the Terriers connected with five home runs as they went on to even the weekend series 1-1.

The long ball for Wofford was the story of the game as the Terriers evened the Southern Conference series at one game apiece. Carson Waln and Cody Miller connected with two home runs each, while Brett Hash knocked one of his own as the Terriers raced past ETSU 14-5 on Saturday afternoon.

Between the two teams, there were a combined seven home runs. Hagen Owenby (Knoxville, Tenn.) and Aaron Maher (Brentwood, Tenn.) each knocked a home run for ETSU.

To start the game, Wofford jumped out to an early 2-0 lead. Just like in game one, Waln was the Terrier that provided the runs as he knocked his second home run of the series in the first inning. However, ETSU quickly responded in the home half with a solo homer from Owenby. His towering homer was his eighth of the season, which ties the team lead with Chris Cook (Kingsport, Tenn.).

ETSU gained the lead with a pair of runs in the next frame. Caleb Longley (Cleveland, Tenn.) started the inning with a single, and he moved to third on a sacrifice bunt and a wild pitch. Blake Rowlett (Clarksville, Tenn.) drove him in off grounder to second, but Rowlett was able to reach off a throwing error and advance to second on the miscue. Hunter Parker (Chattanooga, Tenn.) continued to keep his bat hot as he knocked an RBI single to center to give ETSU the 3-2 advantage.

The ETSU lead quickly disappeared as the Terriers scored two in the third off Waln’s second consecutive two-run home run to left field.

Despite being down for a second time in the game, the Buccaneers were able to tie the game at 4-4 in the fifth off an RBI groundout from Maher.

Tossing in his sixth inning on Saturday, Blake Smith (Ninety Six, S.C.) was batted around as the senior surrendered four hits and six runs (three earned). Mack Nathanson drilled a leadoff double, and after a sacrifice bunt, Max McDougald connected with an RBI single up the middle. In the next at-bat, Cody Miller drew the count full, and he connected with a two-run homer to left field to make the game 7-4, Wofford. After a fielding error and a walk, Brett Hash knocked a three-run home run to center field to pad Wofford’s lead to 10-4.

The following inning, Wofford extended its lead with two more runs, but ETSU cut into the Terrier lead as Maher cranked his third home run of the season. The Terriers plated two more in the eighth as they went on to claim the match 14-5.

Four Buccaneers posted multi-hit games including Parker and Owenby each tallying an RBI. Christian Bailey (Kingsport, Tenn.) and Cullen Smith (Lebanon, Tenn.) each recorded a pair of hits. Maher and Longley both finished the game going 1-for-5 with Maher recording two RBIs and a run scored while Longley touched home once.

Red-shirt freshman Sam Stewart (Kingsport, Tenn.) recorded his first collegiate hit as he came on to hit for the first time in the game in the eighth inning.

The rubber match of the three-game series between the Bucs and Terriers is scheduled for Sunday, April 30 at Thomas Stadium. First pitch is set for 1 p.m., and Jamin McCann (Kingsport, Tenn.) is set to toe the rubber for the Blue and Gold.