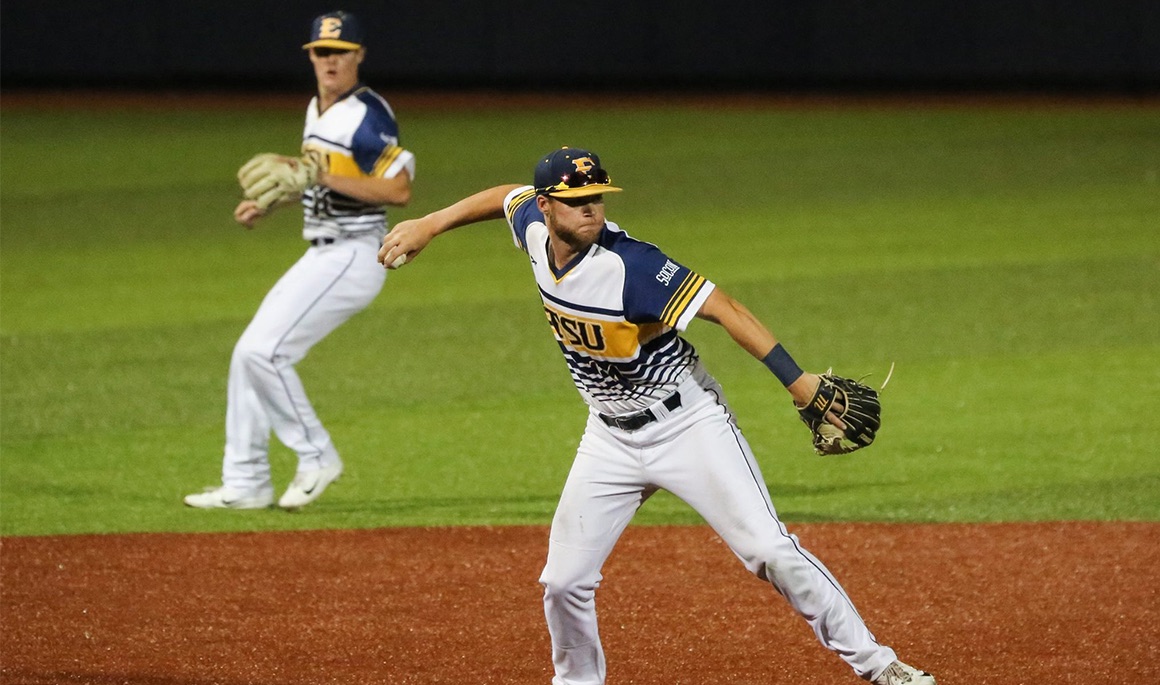 JOHNSON CITY, Tenn. (April 30, 2017) – The ETSU baseball team attempted a ninth inning comeback as the Bucs plated five runs in the final frame, but Wofford fended off the heavy attack as the Terriers claimed the series finale on Sunday 11-8 at Thomas Stadium.

For the first time in the three-game set, Wofford was held scoreless in the first frame as ETSU starting pitcher Jamin McCann (Kingsport, Tenn.) went 1-2-3 while inducing an inning-ending double play.

ETSU couldn’t capitalize holding the SoCon foe scoreless in the first frame as the Bucs could only muster one hit in the home half from Hagen Owenby (Knoxville, Tenn.).

Wofford took the lead in the second inning as Carson Waln and Mack Nathanson started the frame with back-to-back singles. Reed Massey took advantage as he knocked a three run homer to left field to give the Terriers the 3-0 lead.

Caleb Longley (Cleveland, Tenn.) cut into the deficit as he crushed a towering solo home run over the scoreboard in left field to lead off the inning. It was his eighth home run of the year, which puts him in a three-way tie for the most on the squad. The seven-pitch at-bat cut the deficit to two runs for the Blue and Gold.

After a scoreless third inning for both teams, Wofford padded its lead with a run in each the fourth and fifth innings. Stone Pellegrino connected with a RBI groundout in the fourth, and Brett Hash tallied Wofford’s first solo home run of the series to right field.

Down 5-1, ETSU cut into that deficit by plating two runs, which came off junior Christian Bailey’s (Kingsport, Tenn.) bat in the fifth. Owenby started the frame with a four-pitch walk, and Bailey jumped on the second pitched he saw as he drilled a moonshot over the scoreboard and into the parking lot in left field.

After another scoreless inning for both squads, Wofford pounced on the Bucs as it put up four runs in the top of the seventh. Dylan May started the inning with a single to left field, and following a sacrifice bunt, Kody Ruedisili snuck a two-run home run down the right field line. Nathanson made it a 9-3 game as he contributed a bases clearing, two RBI double to center field.

For the fourth inning of the game, both teams were held scoreless in the eighth. However, Wofford continued to add to its lead in the ninth as Nathanson connected with a two-out, two run homer to right field.

In the bottom half of the ninth, ETSU tried to start a late rally as Owenby and Aaron Maher (Brentwood, Tenn.) knocked back-to-back singles. After a groundout and a walk, Cullen Smith (Lebanon, Tenn.) burned the Terrier center fielder as he cleared the bases with a three RBI triple. It was his first triple of his career. The three RBI hit brought the game to 11-6, and after a pitching change, Smith trotted home on a balk to make it a four run game. Blake Rowlett (Clarksville, Tenn.) kept the momentum going as connected with his first hit of the game, which was an opposite field solo homer.

After the third Wofford pitching change of the frame, Matt Ellmyer struck out the first and only batter he faced to conserve the 11-8 victory.

The ETSU pitching staff continued to struggle against the Terrier lineup as the Bucs surrendered four home runs to four different players on Sunday. In the series, Wofford recorded ten home runs in the three-game series at Thomas Stadium while ETSU connected with six.

Eight of the ETSU starters recorded at least one hit on Sunday with Owenby, Smith and Parker each posting multi-hit games. Smith led the squad with three RBIs while Owenby and Longley each touched home twice.

The Terriers had the narrow edge as they went 3-for-7 with runners in scoring position while the Bucs were limited to one hit in seven chances.

Wofford starter Austin Higginbotham earned the win after tossing 7.1 innings and allowing seven hits. He moves to 4-4 on the year. McCann was pinned with his first loss of the season as he drops to 3-1.

ETSU’s next game will be a mid-week, non-conference matchup in Knoxville, Tenn. on Tuesday, May 2 as the Bucs look to win the season series with Tennessee. First pitch between the Bucs and Vols is scheduled for 6 p.m.