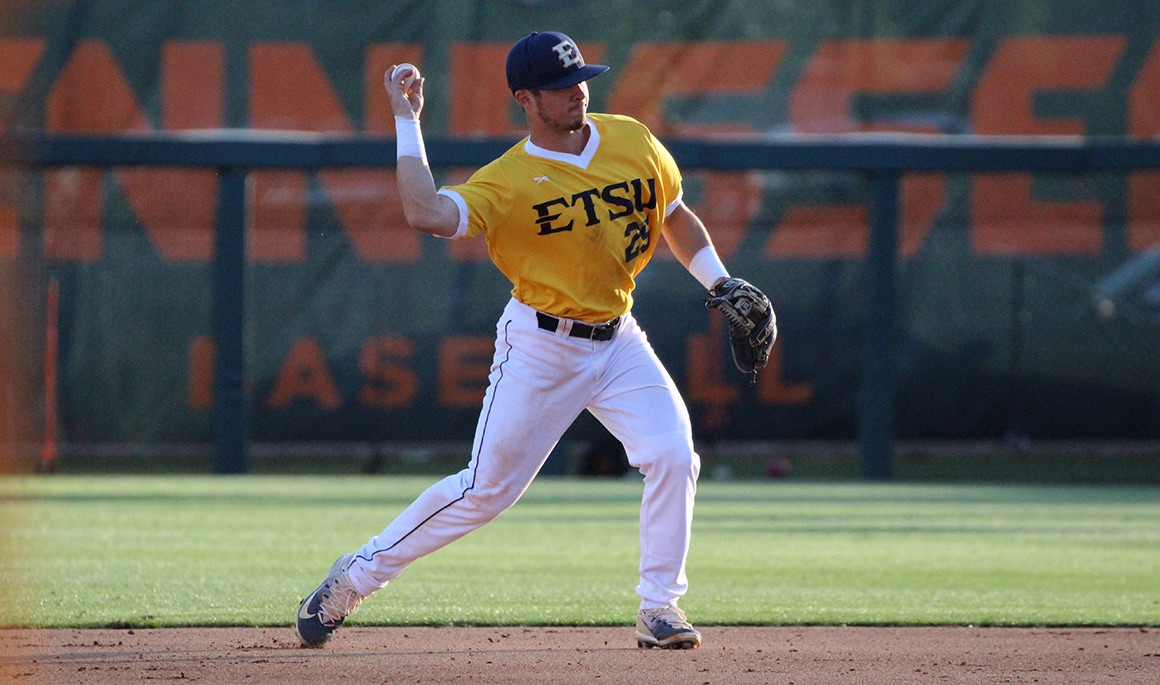 Rowlett connects with three hits as Bucs fall 9-2 at Tennessee
ETSU at UT | May 02, 2017
Related Links

KNOXVILLE, Tenn. (May 2, 2017) – Despite senior Blake Rowlett (Clarksville, Tenn.) going a perfect 3-for-3 on Tuesday, the ETSU baseball team fell to Tennessee 9-2 on the road in Knoxville, Tenn. as the Vols scored multiple runs in three frames at Lindsey Nelson Stadium.

Making his first start of the year, Logan Gentry (Kingsport, Tenn.) shut down the Volunteer lineup as he only surrendered one hit in the first two frames. The Tennessee starter - Zach Warren - matched Gentry along the way as he worked a pair of scoreless innings, but the Volunteer pitcher walked a pair, which gave ETSU a base runner in both innings.

After holding the Blue and Gold scoreless in the third, UT opened the scoring as it plated two runs off the bat of Jeff Moberg. Danny Sirven worked a one out single, and Moberg dropped his seventh home run of the season over the left field wall to give the Vols the 2-0 lead.

The Bucs cut the lead in half as they took advantage of a leadoff walk from Christian Bailey (Kingsport, Tenn.). After a pair of groundouts which pushed the junior to third base, Rowlett connected with a RBI single to right field to make the game 2-1, Tennessee.

However, the Volunteers quickly responded as they sent seven batters to the plate in the fourth. Max Heflin started the rally as he knocked a two out single down the left line. In a hit-and-run situation, Matt Waldren smacked a double down the left field line to score his teammate. After a fielding error, Waldren was able to score on a wild pitch from third base to give his team the 4-1 lead.

The ETSU bullpen was stellar for the next three frames as Peyton Taylor (Kingsport, Tenn.), Griffin Krieg (Nashville, Tenn.) and Dillon Cate (Sevierville, Tenn.) held the Vols scoreless and hitless. During that three-inning span, only one Vol reached base, which came in a nine-pitch at-bat for Justin Ammons. However, the Bucs were also held off the scoreboard during that same span. Bailey and Rowlett each tried to start rallies in the sixth and seventh innings as Bailey split the right-center field gap in the sixth, and Rowlett started off the seventh with a double to right. The two Bucs were stranded on second base, though, as their teammates couldn’t score them.

Tennessee blew the game open to 9-1 as it sent nine batters up to the plate. The Volunteers connected with four hits including a pair of RBI singles and a two RBI double from Luc Lipcius.

The Bucs didn’t surrender as Rowlett roped his third hit and second double of the night to right-center to start the frame. After a strikeout, Hunter Parker (Chattanooga, Tenn.) drove in his teammate with a single up the middle to make the game 9-2, but Zach Vasquez struck out the final two ETSU batters to seal the 9-2 victory in Knoxville.

Rowlett led ETSU as he dropped three hits including a pair of doubles. He scored the first Buccaneer run as he connected with a two out, RBI double in the fourth. Parker recorded the second run for the Blue and Gold as he went 1-for-4 with a RBI, and Bailey and Rowlett each touched home once.

Four Buccaneer pitchers had scoreless outings against the Southeastern Conference, in-state rival. Taylor twirled 1.1 innings of scoreless ball, and Krieg and Cate each tossed one frame while both didn’t surrender a hit or a run. Connor Bartow (Jonesborough, Tenn.) finished the game for the Bucs as he went 0.1 frames.

Gentry was pinned with his first decision of the year as he drops to 0-1. Will Neely, who started the game for UT at Smokies Park, earned the win as he moves to 3-1 on the season. ETSU moves to 20-23 overall while Tennessee advances to 23-18.

ETSU’s next game will be on the road as the Bucs travel to Southern Conference foe The Citadel for a three-game set beginning on May 5 at 4 p.m.