Baseball
Baseball
ETSU at The Citadel | May 06, 2017
BoxscorePlay-by-Play 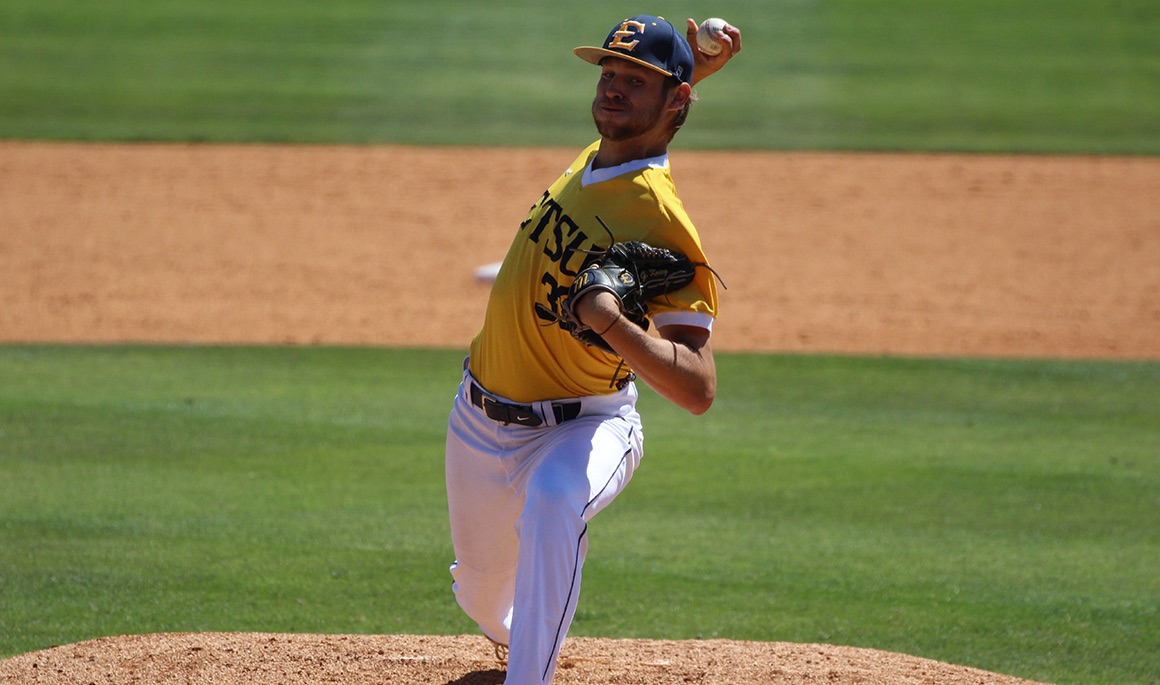 Krieg, Gentry combine for 13 strikeouts as Bucs fall 4-1 to The Citadel
ETSU at The Citadel | May 06, 2017
Related Links

CHARLESTON, S.C. (May 6, 2017) – Golden Spikes Watch List finalist JP Sears limited the ETSU baseball lineup to two hits as he twirled a complete game where the Bucs fell 4-1 to The Citadel on Saturday at Joe Riley Park.

Sears posted his second complete game of the year where he allowed two hits and one run, which was scored in the eighth inning. He walked a pair and recorded 13 strikeouts, and of the 13 strikeouts, 10 of the punch-outs were swinging.

ETSU starting pitcher Griffin Krieg (Nashville, Tenn.) struggled in the first frame as he allowed two runs off three hits. Taylor Cothran started the game for the Bulldogs with a solo home run to left field. Jonathan Sabo nearly took the ball out of the park, but he strolled into second with his third extra-base hit of the series. He later scored on a RBI single from William Kinney to take a 2-0 lead.

The Bulldogs extended their lead in the fourth inning by tacking on two more runs. After back-to-back hits to start the inning, Clay Martin drove in a teammate on a sacrifice bunt. The next batter for The Citadel, Cole Buffington, dropped the second sacrifice bunt in a row, and the Bulldogs plated their fourth run of the game.

The ETSU offense was held to only two hits, and the two hits came off the bats of Cullen Smith (Lebanon, Tenn.) in the fifth inning and Hagen Owenby (Knoxville, Tenn.) in the eighth frame.

Sears faced the minimum in five of the first six innings including going 1-2-3 in the first three frames.

The first ETSU base runner came in the fourth inning as Christian Bailey (Kingsport, Tenn.) reached on a fielding error under the third baseman’s glove.

ETSU recorded its only run of the game in the eighth inning as Sears walked Smith and hit Blake Rowlett (Clarksville, Tenn.) to start the inning. Hunter Parker (Chattanooga, Tenn.) moved the two Buccaneers up one base, and Jammer Strickland (Knoxville, Tenn.) came off the bench to pinch hit for Seth Cunningham (Bristol, Va.). The Knoxville, Tenn. native nearly beat out an infield single, and Smith was able to trot home to pull the game to 4-1.

In the final frame, Owenby reached base for a second time in the game as he connected with the second ETSU base knock to center field. After advancing to second on a groundout, Caleb Longley (Cleveland, Tenn.) struck out to end the game.

Between Krieg and Logan Gentry (Kingsport, Tenn.), the duo allowed six hits while striking out 13 batters. Krieg recorded nine of the strikeouts, which was one shy of matching a career high. Gentry matched a career high as he sat down four Bulldogs in two innings of work.

Sears earned the victory as he moves to 5-2 on the season, and despite nearly matching a career high in strikeouts, Krieg was pinned with the loss as he drops to 1-5.

The Citadel starter limited one ETSU leadoff batter to reach base in an inning, and he held the Buccaneer offense hitless (0-for-6) with runners in scoring position. Sears also held the Bucs without a hit with two outs.

The Bulldogs move to 14-29 and 5-12 in the Southern Conference, and ETSU falls to 20-25 and 3-14 in the league. With the win on Saturday, The Citadel claimed its second SoCon series victory of the season.

The Blue and Gold look to salvage game three on Sunday at Joe Riley Park, as Blake Smith (Ninety Six, S.C.) will take the mound for ETSU. First pitch is set for 1 p.m. in Charleston, S.C.