Baseball
Baseball
ETSU at The Citadel | May 07, 2017
BoxscorePlay-by-Play 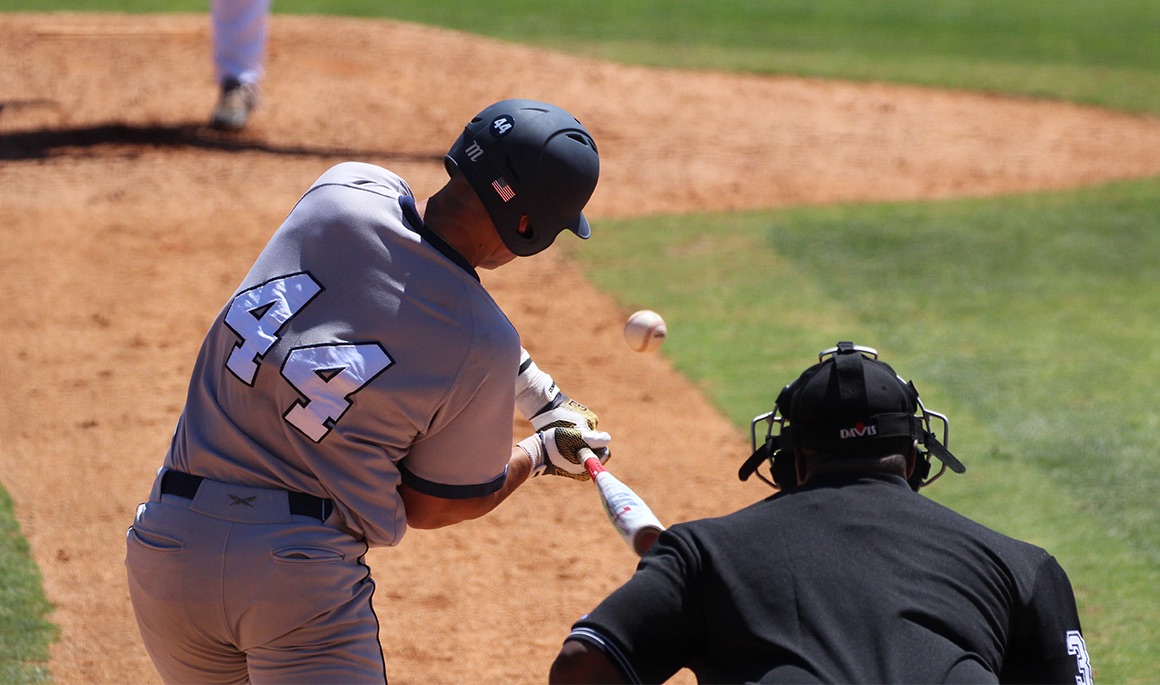 Hagen Owenby connecting with his 200th career hit at ETSU.
Late heroics and a career milestone give the Bucs an extra inning victory
ETSU at The Citadel | May 07, 2017
Related Links

CHARLESTON, S.C. (May 7, 2017) – Behind Hagen Owenby’s (Knoxville, Tenn.) 200th career hit and two run home run in the ninth as well as Jammer Strickland’s (Knoxville, Tenn.) RBI double in the tenth inning, the ETSU baseball defeated The Citadel 10-9 in ten innings to claim the series finale in Charleston, S.C. on Sunday at Joe Riley Park.

Owenby, Strickland and Logan Gentry (Kingsport, Tenn.) provided late heroics for the Bucs as the trio contributed to the extra-inning victory at Joe Riley Park. Owenby went 3-for-5 with three RBIs including recording his 200th career hit in the top of the seventh and smacking the ninth inning, two run, go-ahead home run. Strickland smacked his third home run of the season in the three-run sixth inning, and the Knoxville, Tenn. native plated the game-winning run in the top of the 10th inning off his double. Gentry came out of the bullpen in a walk-off situation for The Citadel, and he held the Bulldogs in-check by tossing 1.2 innings of scoreless and hitless ball.

For the first time in the series, neither team was able to score in the first inning. ETSU did however take the lead in the second frame as Christian Bailey (Kingsport, Tenn.) and Blake Rowlett (Clarksville, Tenn.) started the rally with back-to-back walks. Cullen Smith stroked a ball past the Bulldog’s second baseman, and Bailey hustled around third to score off his teammate’s single. Strickland followed with a safety squeeze, and Rowlett strolled home to give the Blue and Gold a 2-0 lead.

The first ETSU lead quickly dissipated as the Bulldogs started their inning with three straight hits including two doubles from Joe Sabatini and Jeffery Brown. Brown’s double plated his two teammates which tied the game at 2-2.

Maher connected with the first ETSU homer of the series as he started the top of the third with a home run to right field. The solo homer was his fourth of the year, and the run gave the Bucs a narrow 3-2 lead.

Holding a one run lead, ETSU starting pitcher Blake Smith shut down The Citadel lineup by posting back-to-back shutouts in the third and fourth innings.

The Citadel knotted the game up for a second time as the team smacked two hits in a row to leadoff the fifth inning. William Kinney dropped a sacrifice bunt, which scored Taylor Cothran from third base to tie the game at 3-3.

The Bucs quickly pounced on the Bulldogs’ starting pitcher Will Abbott in the following inning as ETSU recorded three runs off three hits. Bailey started the inning with a double down the left field line, and he moved to third on a groundout. Following a hit by pitch, Cullen Smith roped a single to right field, but Caleb Longley (Cleveland, Tenn.) was gunned down at third base trying to put two runners in scoring position. On the next batter, Strickland turned on a pitch to connect with his third home run of the season, which pushed ETSU into a 6-3 lead.

Entering the seventh inning one hit away from his 200th career hit, Owenby hit a RBI single over the third baseman’s head as the milestone hit pushed ETSU’s lead to 7-3.

With a four run lead heading into the bottom of the eighth, ETSU saw its lead disappear behind Cothron’s one out grand slam to left field. The Bulldogs started the inning with a double to center field, and after a wild pitch, Brown walked to put runners at the corners. Clay Martin singled through the right side to make it a 7-4 game. With two runners on, the Bulldogs drew a walk to force the bases loaded. Cothran jumped on the third pitch of the at-bat, and he smoked a grand slam to give The Citadel the narrow 8-7 lead.

Despite being down to their final three outs, the Bucs came back in the ninth inning with Owenby leading the surge. Maher stroked a one out single to center field to put a runner on base. After fouling off several pitches, Owenby crushed the go-ahead, two run homer to dead center field to give ETSU the 9-8 advantage.

The Citadel put the pressure on ETSU in the bottom of the ninth as the first two batters reached base on a single and a hit by pitch. Following a sacrifice bunt, Shy Phillips connected with a deep sacrifice fly to left center to tie the game at 9-9. With two outs and two runners on, Gentry made J.D. Davis line out to center field to force extra innings.

In the top of the 10th, Cullen Smith started the rally with a one out, four pitch walk. Strickland uncorked on the third pitch of the at-bat and drove a double down the left field line. Cullen Smith came hustling around third and touched home without a throw.

After coming in a tough situation in the ninth, Gentry posted a 1-2-3 inning in the bottom of the tenth to secure the 10-9 win.

Gentry earned his first victory of the year as he moves to 1-1. Kyle Smith was pinned with the loss as he drops to 0-1.

The Bucs next game will be on Tuesday, May 9 at Thomas Stadium as the Bucs conclude the home-and-home with Radford. First pitch is scheduled for 6:30 p.m.