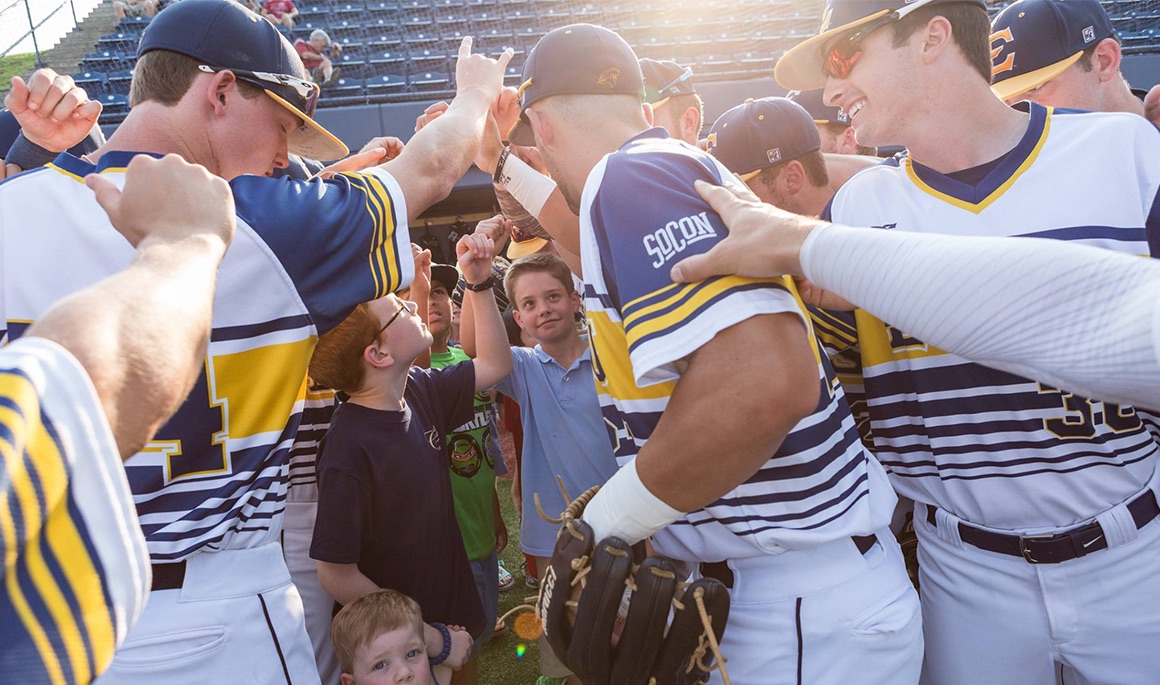 ETSU enters the mid-week contest with a 21-25 overall record including going 4-3 in Tuesday games.

The Blue and Gold are fresh off a road series with The Citadel where the Bucs went 1-2 in Charleston, S.C. ETSU had late heroics and a milestone hit, which vaulted them to a 10-inning victory at Joe Riley Park. Hagen Owenby (Knoxville, Tenn.) connected with his 200th career hit in the seventh inning off a RBI single. He also provided the go-ahead two run homer in the ninth inning, which proved to be pivotal in the extra-inning affair. Owenby joins Chris Cook (Kingsport, Tenn.) in the 200-hit club. Cook recorded his milestone hit at Appalachian State two weeks ago with a four-hit performance in Boone, N.C.

Christian Bailey (Kingsport, Tenn.) continues to lead the high-powered ETSU offense with a .366 batting average, 70 hits and 15 doubles. Owenby leads the team with nine home runs and a .545 slugging percentage as well as drawing 34 walks. Cook has 68 total hits including the second-most runs scored with 49 including 14 stolen bases. Hunter Parker (Chattanooga, Tenn.), Aaron Maher (Brentwood, Tenn.) and Cullen Smith (Lebanon, Tenn.) round out the top-6 players on the squad in batting average. Parker has recorded 55 hits with nine doubles while Maher has swiped 12 bases while knocking 64 total hits with 11 doubles, three triples and four home runs. Smith has knocked nine doubles and 51 hits including plating 32 RBIs during his rookie season.

Blake Smith (Ninety Six, S.C.) posted a strong outing in the series finale at The Citadel. The senior tossed seven innings where he walked only one batter and struck out seven. Griffin Krieg (Nashville, Tenn.) nearly matched a career high in strikeouts in game two of the series with The Citadel as he struck out nine batters in six innings of work. Logan Gentry (Kingsport, Tenn.) had a great weekend in Charleston, S.C. where he worked 3.2 innings where he didn’t allow a run and only allowed one hit. He even struck out five Bulldogs and held The Citadel to a .100 batting average.

Radford enters the mid-week game with a 20-25 overall record including posting a 10-16 road mark.

The Highlanders nearly swept a road series this past weekend as they traveled to Asheville, N.C. to square off with UNC Asheville. Radford won the first two games by a combined 18-4 score, but UNC Asheville out-dueled the Highlanders 7-6 in ten innings to salvage the series finale.

Kyle Butler – who has started in 40 of the 45 games this year – leads the team with a .323 batting average, 11 doubles and 54 total hits. Butler has connected with a pair of home runs and 25 RBIs, and he has swiped six bases on the year and has touched home 36 times. Spencer Horwitz has played in 43 games this year, and he has hit at a .316 clip. He has tallied 15 extra-base hits while recording a .503 slugging percentage and a .402 on-base percentage. Jonathan Gonzalez continues to lead the team with 20 extra-base hits including 11 home runs. He also leads the Highlander squad with 37 RBIs and 94 total bases.

Kyle Zurak is one of the top relievers for Radford as he has appeared in 18 games this year and sports a 3-3 record. He totes a team-leading 2.17 ERA and six saves in 37.1 innings pitched. Austin Gerber is right behind him, as he is 4-1 on the year in 17 games. He has tossed 39.2 frames while striking out 22 batters and walking only six batters.