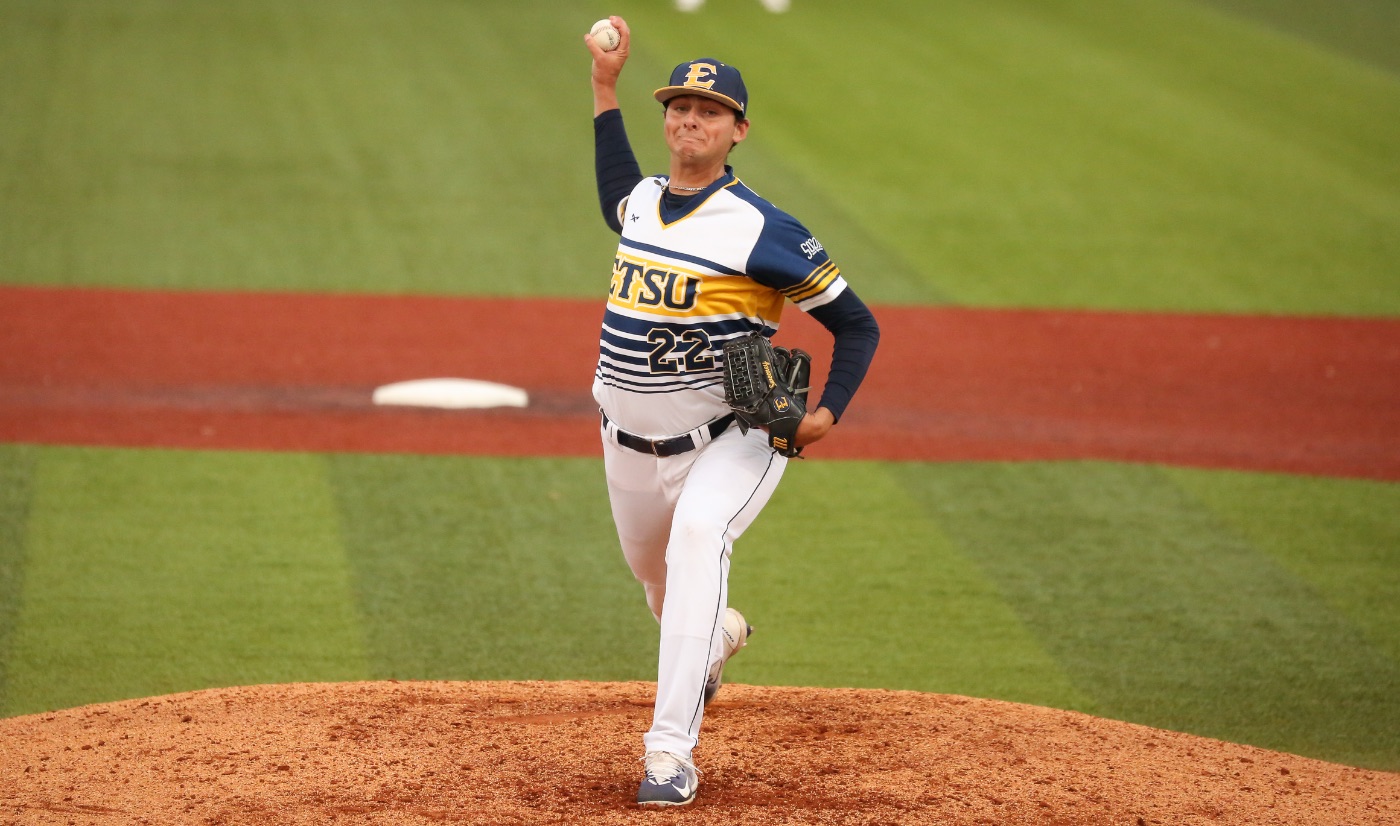 JOHNSON CITY, Tenn. (May 9, 2017) – In a game that didn’t see much offense until the final third of the match, the ETSU offense caught fire in the seventh inning by plating six runs en route to a 8-5 victory over Radford on Tuesday at Thomas Stadium in Johnson City, Tenn.

Both Cullen Smith (Lebanon, Tenn.) and Blake Rowlett (Clarksville, Tenn.) connected with solo home runs for the Bucs. Smith’s go-ahead bomb in the second inning was his second career homer while Rowlett’s leadoff home run in the eighth was his ninth of the season and 17th of his career. Smith and Rowlett combined for four runs scored and three RBIs.

The five through eight hitters for ETSU - Smith, Rowlett, Jammer Strickland (Knoxville, Tenn.) and Hunter Parker (Chattanooga, Tenn.) – each tallied a pair of hits in the mid-week contest. Strickland and Parker each dropped a double and a single while plating a RBI and a run scored. Jackson Greer (Knoxville, Tenn.) recorded a two RBI single in the six-run seventh inning and came around to score in the frame.

Connor Bartow (Jonesborough, Tenn.) earned his first collegiate start, and he twirled two innings while scattering two hits and walking one in a scoreless outing. Drew Korzybski (Knoxville, Tenn.) and Jamin McCann (Kingsport, Tenn.) each tossed an inning of work and combined for one hit allowed. Russell Koesters (Kingsport, Tenn.) came in to pitch in the fifth inning with two runners on base and one out, and he induced an inning-ending 6-4-3 double play to end the Highlander rally. Daniel Sweeney (Johnson City, Tenn.) pitched a scoreless seventh inning where he went 1-2-3 including striking out the first Highlander of the game.

ETSU connected with an impressive .333 average with runners in scoring position (3-for-9) while connecting with six hits with runners on base and smacking four two-out hits. The ETSU pitching staff limited the Highlander offense to two leadoff batters reaching base.

For the first six innings, there was eight combined 1-2-3 innings. ETSU had its first two hits from Smith and Strickland which both came in the second frame.

After cruising through the first six and a half innings, the ETSU bats exploded in the bottom of the seventh for six runs and seven hits.

Hagen Owenby (Knoxville, Tenn.) started the inning with a leadoff single. After a strikeout and a pitching change, Rowlett and Smith dropped back-to-back singles with Smith’s single breaking the 1-1 tie. Strickland dropped down a safety squeeze, which turned into a RBI single after out-hustling the Highlander to first base. On the third pitch he saw, Parker slapped an opposite field single to left center to score Smith from second base. For the fourth hit in a row for ETSU, Greer jumped into the action by connecting with a two RBI single to make the game 6-1. After a second pitching change, Chris Cook (Kingsport, Tenn.) roped an infield single, and Aaron Maher (Brentwood, Tenn.) was hit by a pitch to force the bases loaded with only one out. Batting for the second time in the frame, Owenby knocked a sacrifice fly to center to extend the lead to 7-1.

The Highlanders made the game interesting in the following frame as they capitalized on five hits in the inning. Danny Hrbek and Jonathan Gonzalez knocked back-to-back RBI singles, and Straton Podaras connected with a sacrifice fly to pull the game within three runs.

In the bottom of the eighth, Rowlett had a leadoff solo home run. His ninth homer of the year padded ETSU’s lead at 8-4.

Radford tried to make the game interesting with two outs in the ninth. Despite allowing a run off Hrbek’s triple, Logan Gentry (Kingsport, Tenn.) secured the second straight victory for the Blue and Gold.

Sweeney earned his first career victory as he moves to 1-0 this year. Evan Threehouse was pinned with his first loss of the season as he allowed the tie-breaking run in the six-run seventh inning.

The Bucs next game will be at Thomas Stadium as ETSU welcomes Samford to Johnson City for a three-game set beginning May 12 at 6:30 p.m.