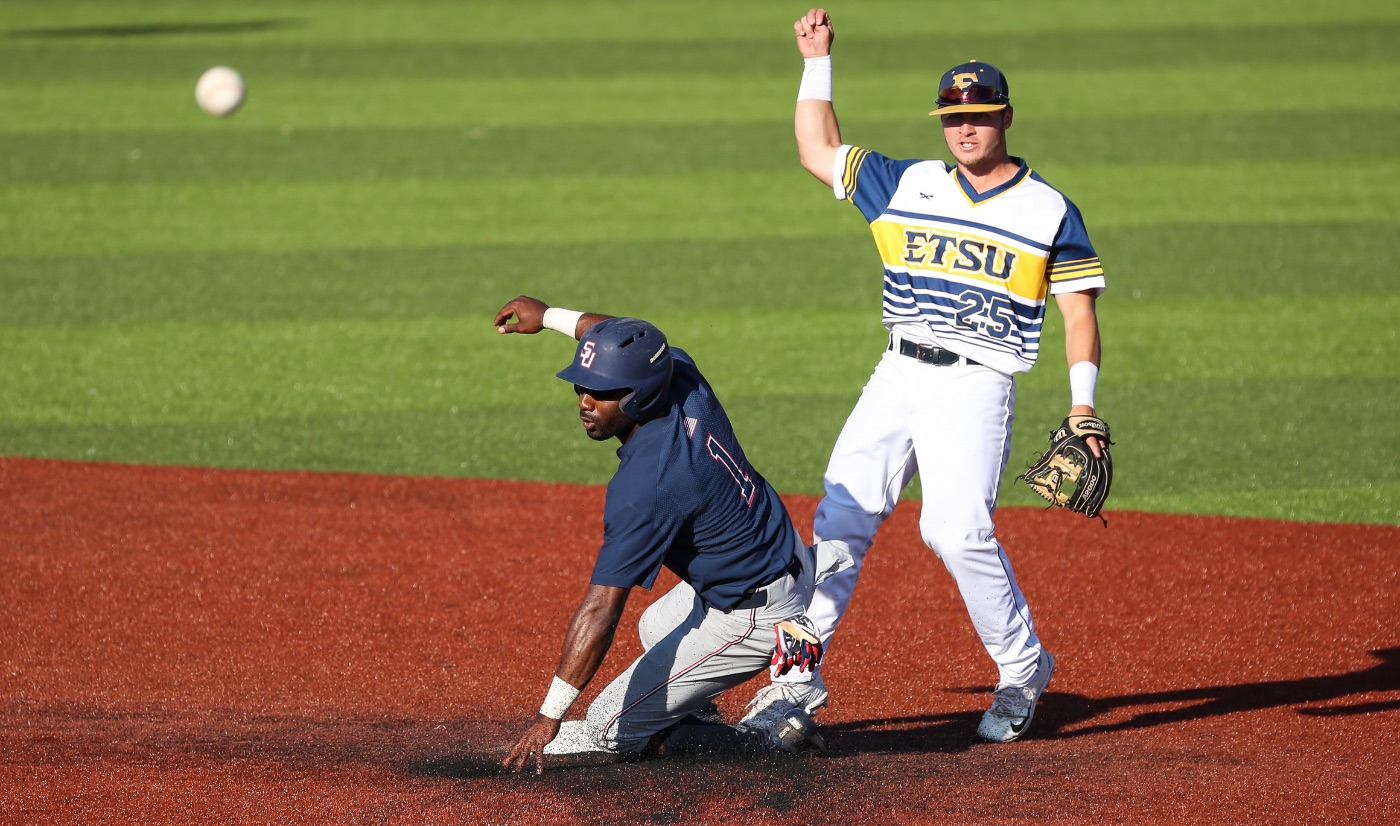 JOHNSON CITY, Tenn. (May 13, 2017) – The ETSU baseball team was able to win the second game of the double header on Saturday against Samford as the Bucs dropped game one 6-2, but they came back in the second game 10-8 to force a rubber match on Sunday at Thomas Stadium.

Prior to the double header, Chris Cook (Kingsport, Tenn.) and Hagen Owenby (Knoxville, Tenn.) were recognized as the two Buccaneers recorded their 200th career hit this season. Cook tallied his 200th hit at Appalachian State where he smacked four hits in Boone, N.C., while Owenby logged his career milestone off a RBI single at The Citadel last Sunday. ETSU head coach Tony Skole and ETSU’s all-time hits leader Paul Hoilman presented a commemorative baseball to the duo for all their hard works and accomplishments.

Prior to the rubber match (12:45 p.m.) on Sunday, May 14, ETSU will recognize the 10 seniors on the roster down on the diamond at Thomas Stadium. 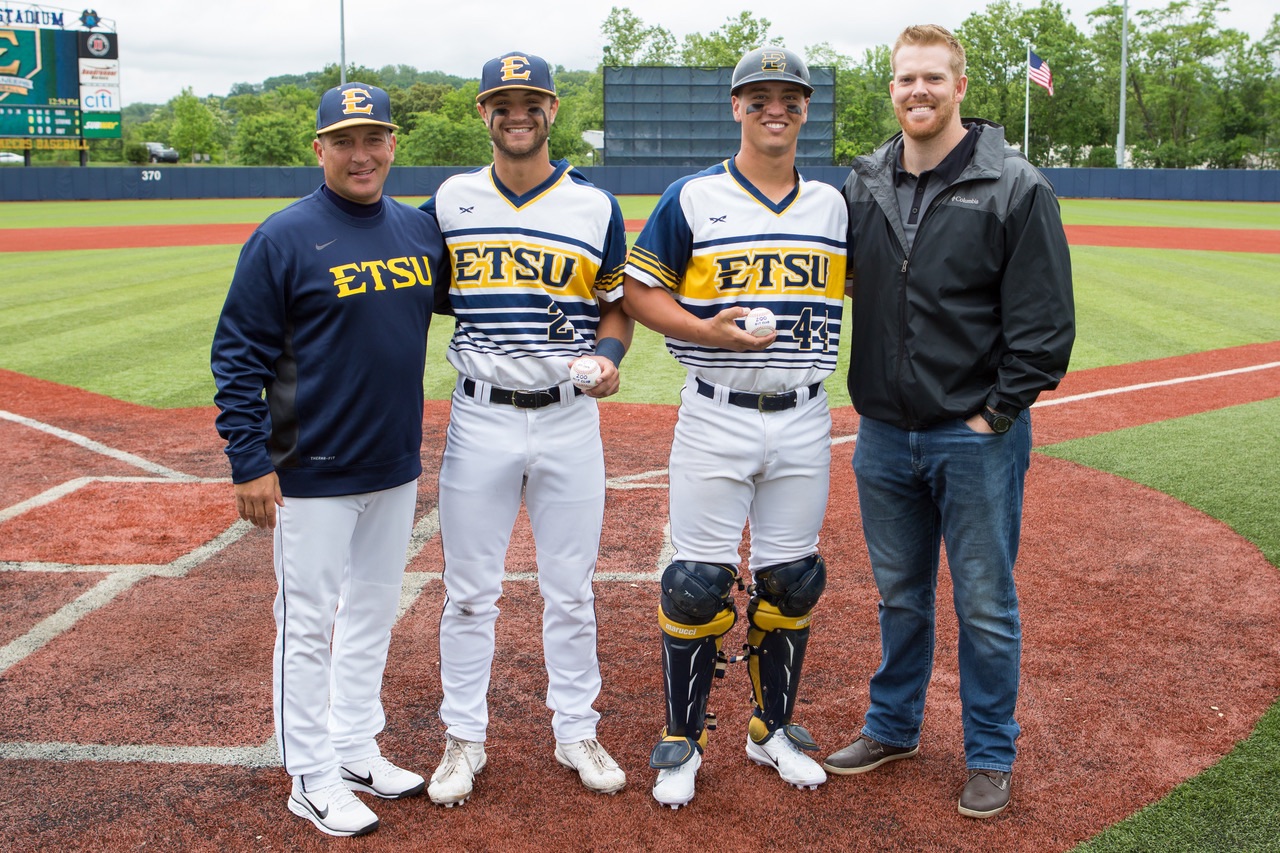 Samford’s starting pitcher – Cody Shelton - stifled the Bucs’ bats for the first eight innings as he only surrendered one hit, which came off the bat of Owenby in the fourth inning. However, ETSU started to get to the starting pitcher as he allowed three runs off two hits in the final frame. Shelton departed in the final frame where Wyatt Burns halted the Buccaneer comeback by striking out the final two batters.

Owenby smacked half of ETSU’s hits as he recorded a double and a single in game one. The junior started the ninth inning rally with one out as he stroked a single to center. He also scored the Blue and Gold’s first run of the game off Blake Rowlett’s (Clarksville, Tenn.) RBI double to left center. The Clarksville, Tenn. native finished the first game going 1-for-4 with a RBI and a run scored.

Following Rowlett’s double, Caleb Longley (Cleveland, Tenn.) matched his teammate with a double of his own. Longley smoked the double off the left field wall, which cut into the Samford lead. However, Burns struck out the final two batters to end the ETSU one-out rally.

The Bulldogs went on to win the first game of the double header 6-3.

ETSU starting pitcher Ryan Simpler (Lewes, Del.) had a solid outing as he struck out eight Bulldogs while allowing just two walks. He scattered 12 hits, which was a career high, in 7.2 innings of work. Peyton Taylor (Kingsport, Tenn.) and Russell Koesters (Kingsport, Tenn.) closed out the game for the Blue and Gold as the duo twirled 1.1 innings without a run to score.

Shelton earned the win as he moves to 5-2 on the season, and Simpler drops to 6-4 in his 12th start of his junior season.

ETSU was able to split with the Bulldogs as the Bucs were able to overcome Samford’s six-run third inning.

The Bucs jumped out to an early 2-0 lead as Christian Bailey (Kingsport, Tenn.) stroked a two RBI double to right-center, which was his 15th of the season.

Despite being down early, Samford came roaring back by scoring six runs in the third inning to take a 6-2 lead. Highlighting the inning was Ayrton Schafer’s two-out grand slam to left field. The Bulldogs tallied the six runs off six hits and two walks including three singles.

ETSU didn’t give in as it started to chip away at the four-run deficit. The Bucs scored one run in the third, two runs in the fourth and three in the fifth frame to regain the lead.

Rowlett connected with his 10th home run of the year as he knocked a solo bomb in the third, and Cook brought the game within a run as he smoked a two RBI single up the middle with two outs in the fourth inning. Owenby tied the game at 6-6 as he connected with his 10th home run of the season to tie Rowlett for the team lead. Cullen Smith (Lebanon, Tenn.) tallied a sacrifice fly to give the Blue and Gold a 7-6 lead, and Hunter Parker (Chattanooga, Tenn.) beat out an infield single up the middle to give ETSU the two-run advantage over the Bulldogs.

Samford made the game interesting as it scored a pair of runs in the sixth inning including Schafer’s second home run of the game and a Trey Dixon sacrifice fly to left field, which tied the game at 8-8.

ETSU quickly retaliated in the bottom of the sixth as Aaron Maher (Brentwood, Tenn.) reached on a single to center and advanced to second on a throwing error by the center fielder to start the inning. Following a groundout, Rowlett knocked the ball to the Samford first baseman. The Bulldog made the throw home, but the ball trickled out of the catcher’s glove, which allowed Maher to slide in safely to give ETSU the 9-8 advantage.

The Bucs extended their lead as Parker dropped a sacrifice bunt, which scored Jammer Strickland (Knoxville, Tenn.) from third base.

Connor Bartow (Jonesborough, Tenn.) slammed the door for his first career save as he tossed 2.2 innings without allowing a run or a hit and striking out one.

Four Buccaneers recorded two hits including Bailey, Cook and Parker each tallying a pair of RBIs. Rowlett led the team with three runs scored, and Owenby touched home twice while five other Buccaneers scored once in game two.

Cook and Bailey each logged a pair of two-out RBIs while Rowlett and Parker secured a two-out RBI.

Jamin McCann (Kingsport, Tenn.) earned the victory in the second game on Saturday as he twirled 3.2 innings while striking out four Bulldogs while allowing two runs off two hits.

McCann earned the victory as he moves to 4-2 on the year, while Hamp Skinner (1-1) was pinned with the loss.

The rubber match of the series will start at 1 p.m. at Thomas Stadium. At 12:35 p.m., the Bucs will recognize the ten graduating seniors on the roster.