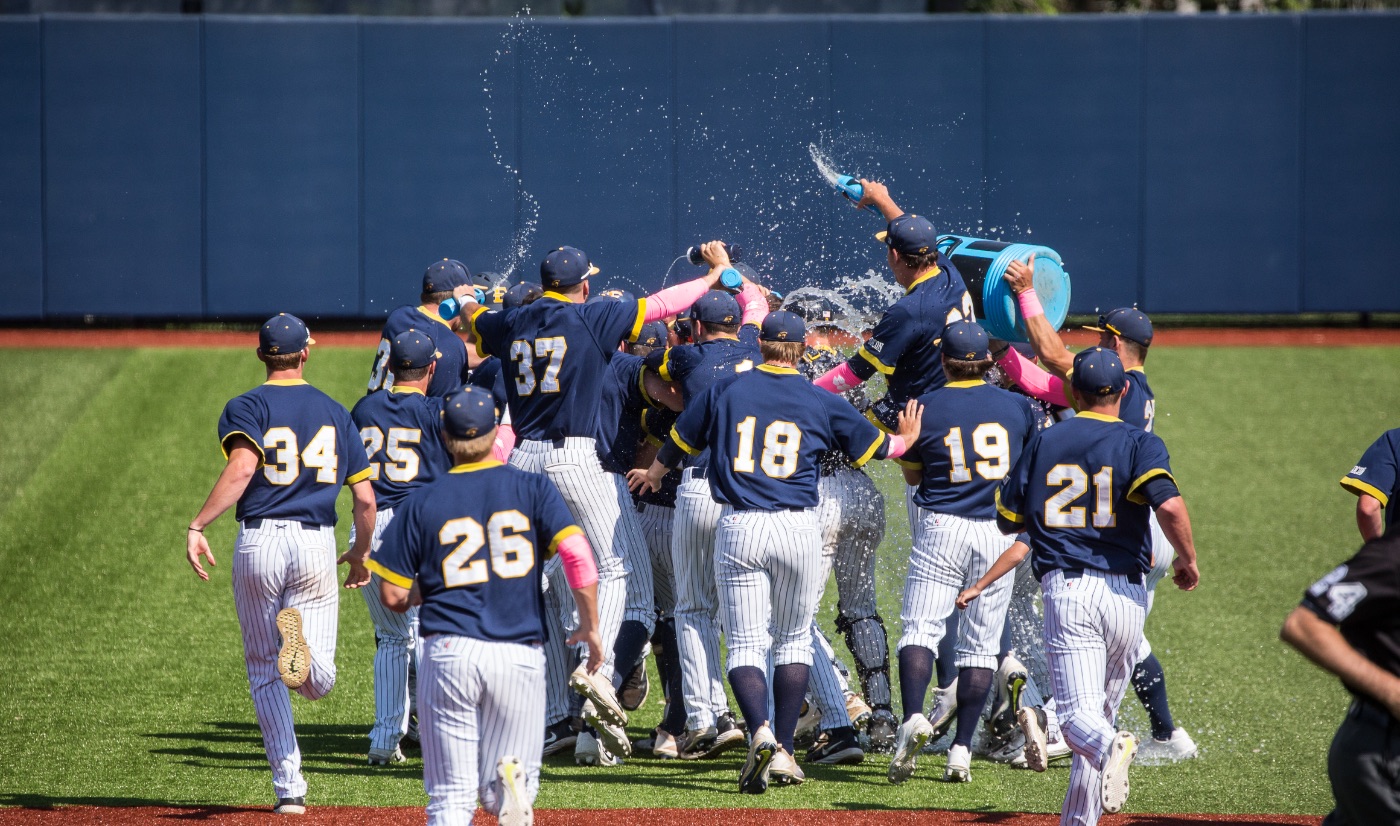 The ETSU baseball team swarms Hunter Parker in centerfield after delivering the game-winning RBI single in the bottom of the ninth inning on Sunday to defeat Samford 7-6.
Parker delivers two out, walk-off single to give ETSU series victory over Samford
Samford at ETSU | May 14, 2017
Related Links

JOHNSON CITY, Tenn. (May 14, 2017) – Junior Hunter Parker (Chattanooga, Tenn.) delivered the game-winning, walk-off hit in the rubber match as the ETSU baseball team went on to defeat Samford 7-6 in the bottom of the ninth inning to claim the series over the Bulldogs at Thomas Stadium on Sunday afternoon.

Following a strikeout to start the ninth inning, Christian Bailey (Kingsport, Tenn.) singled up the middle to start the rally. After a fly out, Jammer Strickland (Knoxville, Tenn.) was hit by a pitch, and Ethan Rice (Unicoi, Tenn.) drew a six-pitch walk to load the bases for the Chattanooga, Tenn. native. On the fourth pitch of the at-bat, Parker connected with the game winner as his hit road the third base line, which scored Bailey easily from third base and gave ETSU the 7-6 victory at Thomas Stadium.

The hit was ETSU’s third walk-off hit of the season as Bailey delivered the walk-off hit against Central Michigan, and Blake Rowlett (Clarksville, Tenn.) dropped a two-run home run against Oakland earlier this year.

Prior to the series finale with Samford, the ETSU baseball team recognized the ten Buccaneer seniors where each individual received a framed photo and a plaque to honor their playing careers at ETSU. Also since it was Mother’s Day, it was only fitting to have those ten Buccaneer senior’s moms throw out the ceremonial first pitch. 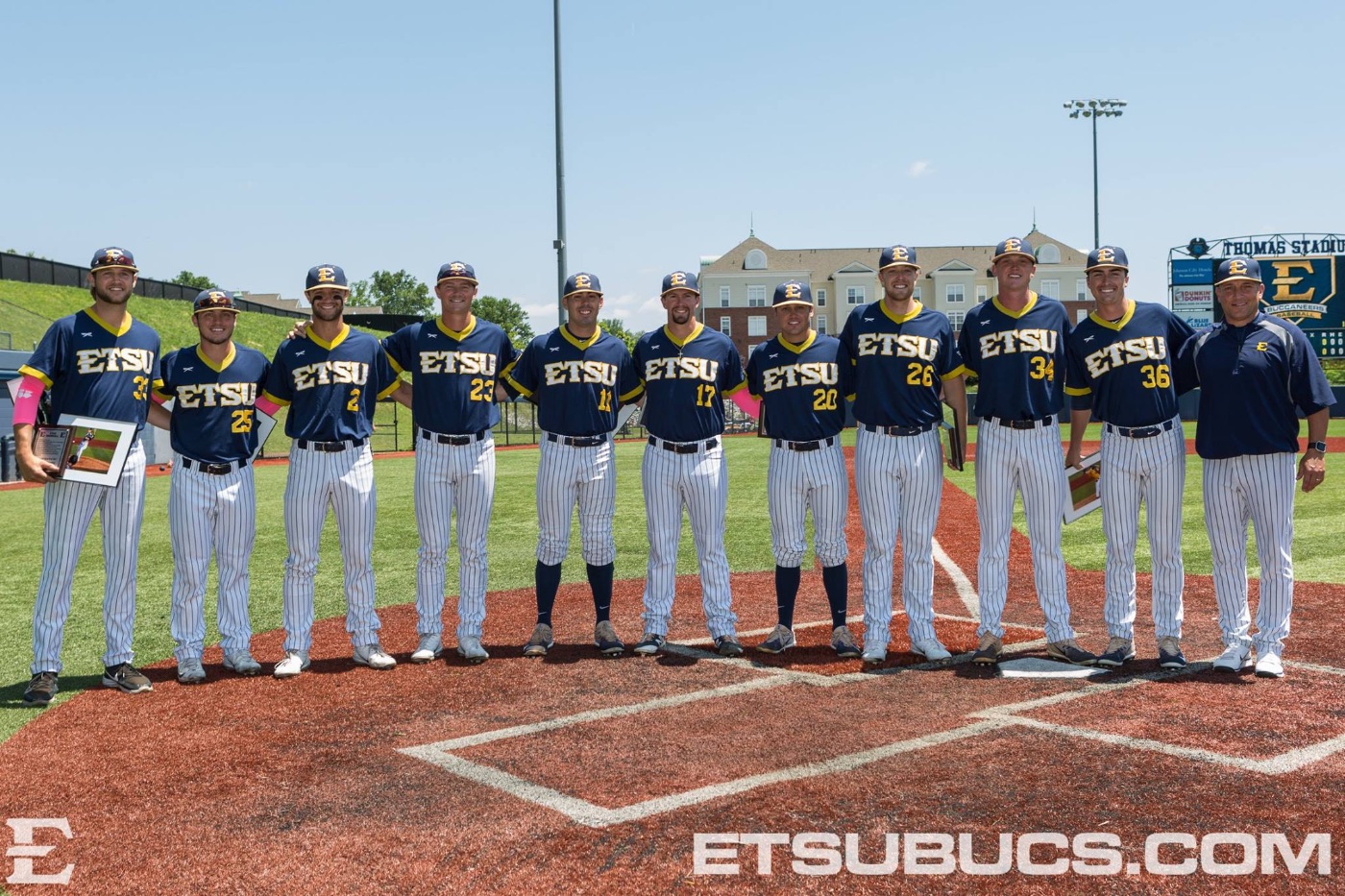 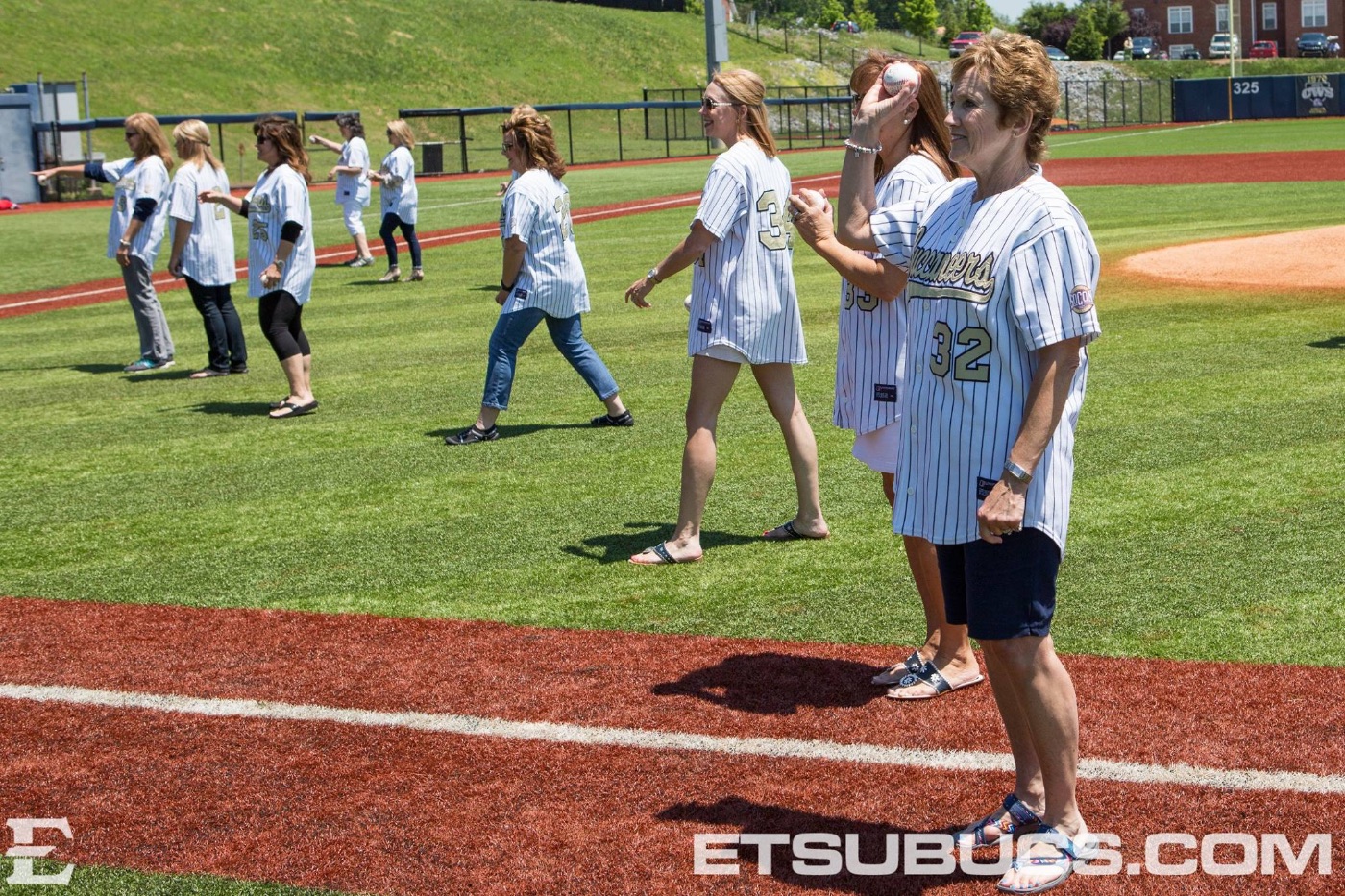 Four Buccaneers posted multi-hit games while Chris Cook (Kingsport, Tenn.) and Aaron Maher (Brentwood, Tenn.) also recorded a pair of RBIs along the way. Hagen Owenby (Knoxville, Tenn.) and Bailey rounded out ETSU’s multi-hit performances as they each posted a two-hit game on Sunday. Parker finished the game going 1-for-3 including tallying two RBIs and a run scored, and Rowlett connected with his team-leading 11th home run of the season in the fifth inning.

As a team, ETSU drew seven walks and connected with two, two-out hits including Parker’s game winner in the ninth inning.

Three Buccaneer pitchers posted a scoreless outing as Jamin McCann (Kingsport, Tenn.), Russell Koesters (Kingsport, Tenn.) and Gentry combined for 2.2 innings of work and three strikeouts. Blake Smith (Ninety Six, S.C.) earned the start in the series finale where he twirled 5.2 innings including striking out eight Bulldogs and only allowed one earned run.

As a pitching staff, ETSU struck out 12 Bulldogs, which marks the ninth time this season the Blue and Gold have posted double-digit strikeouts in a game.

The ETSU offense came out early where the Bucs scored five unanswered runs in the first four innings including four runs in the fourth frame. In the fourth, ETSU took advance of three straight walks, which scored a pair of Buccaneers in the frame.

Samford posted its first run on Sunday in the fifth off a T.J. Dixon RBI triple with two outs. The Bucs responded with a run of their own as Rowlett dropped a leadoff homer in the home half of the inning.

The Bulldogs plated a trio of runs in the next inning to make it a 6-4 game with ETSU leading. Anthony Mulrine nearly had a grand slam as he smoked a bases clearing double off the left-center field wall to make it a two-run game.

After a scoreless inning by both teams, Samford knotted the game at 6-6 with a T.J. Dixon RBI single and a Branden Fryman sacrifice fly.

The Bucs weren’t able to score in the bottom of the eighth despite connecting with two hits, but Gentry shut down the Bulldog lineup in the top of the ninth to give ETSU the walk-off chance in the final inning. With the bases loaded, Parker stroked a single that rode the third base line and easily scored Bailey from third base.

Gentry (2-1) earned the win after tossing 1.2 innings of scoreless and hitless ball, while Wyatt Burns (4-1) was pinned with his first loss of the season.

ETSU advances to 24-26 overall and 6-15 in the Southern Conference, and Samford falls to 28-23 and 9-12 in the league after dropping two games in Johnson City.

The Bucs final home game will be on Tuesday, May 16 against UNC Asheville. First pitch is scheduled for 6:30 p.m. at Thomas Stadium.